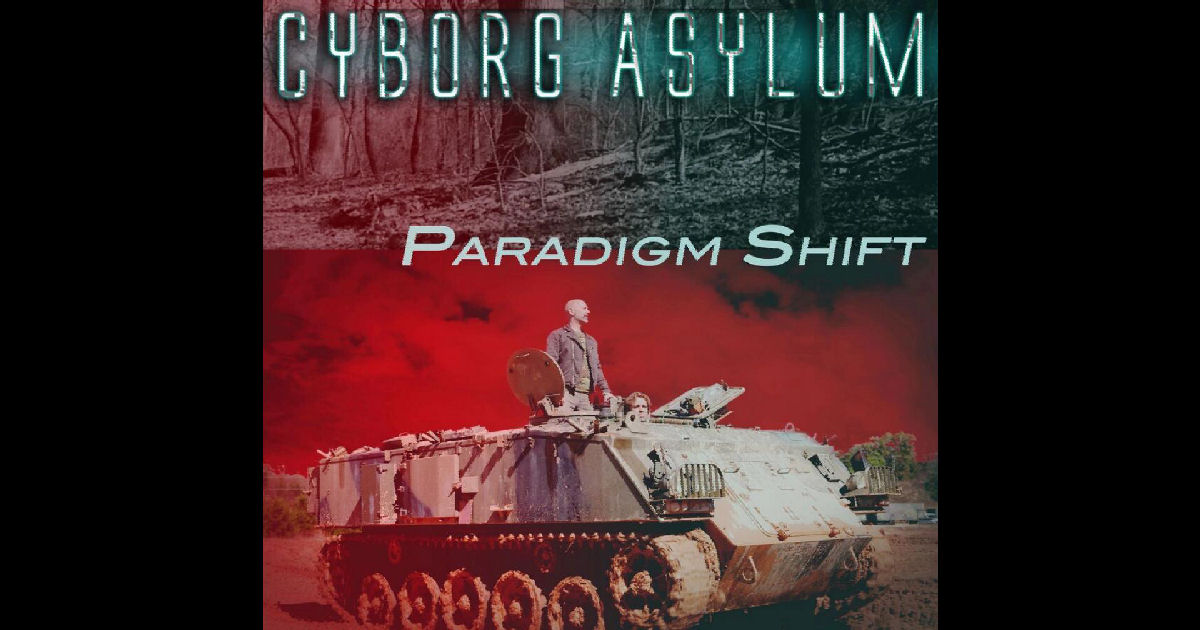 Definitely an interesting tune…there’s much potential here in Cyborg Asylum; I think there’s a few obstacles maybe yet to overcome, but there’s definitely lots for them to branch off of here on their single “Paradigm Shift” from their record Never Finished, Only Abandoned.

So…what’s working well…  I think the music is honestly killer.  The electro sound of “Paradigm Shift” has a wicked pulse to it, quite often complex in its transitions, twists & turns while still providing enough distinct melody for John Tumminia to use to his advantage when singing this tune.  Just make no mistake – his partner in crime David Varga has NOT made this an easy song to find your way into as a vocalist; and in that respect, I think many of the decisions made along the way by Tumminia, in terms of how to approach these different parts of the music, are certainly commendable.  I think the mix on the chorus hooks is right on the money…that was the level of balance I was looking for, the writing is memorable, and Cyborg Asylum take the dynamics even further with added effects & layers strengthening the sound.

What’s likely working against them a bit is the complexity of the song structure and the ever-changing way that it flows.  And don’t get me wrong, I’m not suggesting there’s not an audience for what Cyborg Asylum is up to here – far from it; I’m simply stating the obvious in that the more music challenges the listening ears, the harder it is for the masses to catch on.  In that respect, we definitely need a “Paradigm Shift” – and a large one at that.  Artistic endeavors or highly imaginative music like this often pays a mainstream price for bucking convention and going after something bigger & bolder – again, I’m not telling Cyborg Asylum anything they don’t likely already know…I’m sure they do.  Is everyone gonna dig it?  No.  But there’s not a band out there that everyone digs collectively, so who cares?  The people that do dig a good round of electro-intensity will appreciate the multiple layers in composition at work and how the sonic elements bounce, float, and charge straight at you throughout this entire tune.  Like I said – there’s definitely a complex nature to the flow that’ll keep many people engaged…but we’re talking about nearly prog-rock-post-punk-electro-industrial here in many ways…that’ll throw many people too.

Where I think…and this could very well be my own personal opinion…but where I think that Cyborg Asylum might want to explore & examine for the future, is something like how the verse of this tune came out.  Structurally, they’re clearly able to write something more straightforward if they wanted to, so there’s really no point in picking on that – they’ve chosen to go after more challenging material and I’ve got all the love for that in the world.  Chorus, like I said, I think that came out really well – I think the vocals have a chance to interact with the music better in the mix there, and here’s why; by comparison to the more threadbare approach to the verse, you get a more ‘complete’ sound in the chorus-hooks.  I think there’s no doubt that Tumminia can sing – he demonstrates more than capable abilities throughout this song; I felt like the beginning verse was a bit rocky, but that it took next to no time for John to find his A-game and nail it hard from there.  What I felt like this song needed was to somehow bridge that separation we feel between the vocals & music of the verses on “Paradigm Shift.”  Like I said, Tumminia can sing, it’s as obvious as the nose on your face – so maybe sink him into the music a bit more to let a bit of that incredible music surrounding him pop & stand-out more – right now there’s zero doubt that he’s right out in front of it all.  Another option could certainly be effects, which in my opinion, I think is something they definitely want to explore for a sound like this; there’s no reason that John couldn’t fit right in to what Cyborg Asylum is going for with what he’s clearly capable of writing lyrically & structurally to a complex cut like this – he’s a true asset in that sense…now it’s about matching that vibe.  Some tunes he’s clean & clear vocals are going to find a perfect home…and at times, they’re going to have to make the call and dirty this guy up a lil’ bit to make the whole track succeed in that search for balance.  Right now, it’s like we hear great singing and great music in the verses – but separately.  Even a touch more reverb might end up allowing John’s voice to share a bit more of the spotlight with the music – and ultimately, I think that something to this effect, one of these options, will benefit them largely overall.  Creatively, professionally, artistically, personally – you name it – there are countless reasons as to why this band would want to continue to explore the depths & potential of their music, sound & style – just as there should be as many reasons for you ALL out there to want to do the same.  And it never means that you have to put it out there immediately of course – do it behind the scenes if you want!  That’s what the cutting-room floor is FOR, dear readers, dear friends…for those times you try something new that doesn’t work…because who cares about those anyway?  You show me a band that has one idea they’ve pushed too far that never got released and I’ll show you an album full of them from that same band that DID work…when you push for something new, the rewards are forever endless.

So I suppose that’s where we’re at here with Cyborg Asylum…essentially, I think they’ve got all the right pieces of the puzzle they need and I’m equally sure that there are many people out there that will positively respond to what they’ve got in “Paradigm Shift” as it stands right now.  They are clearly pushing themselves to create something wild, imaginative, & new to experience – and you gotta dig that fundamentally.  Do I think that Cyborg Asylum has more breakthroughs to reach for still in their future of their music?  Sure.  So many of us do…ain’t nothing wrong with that.  I like what I hear on “Paradigm Shift,” but I’m definitely willing to acknowledge that there’s still a level beyond for this band that they haven’t quite discovered yet, or harnessed its full potential.  What I really liked about this particular single was that it gives us multiple audible reasons to believe that breakthrough WILL come & that a strong evolution in the music of Cyborg Asylum is a virtual certainty.

Find out more about Cyborg Asylum at their official website at:  https://www.cyborgasylum.com