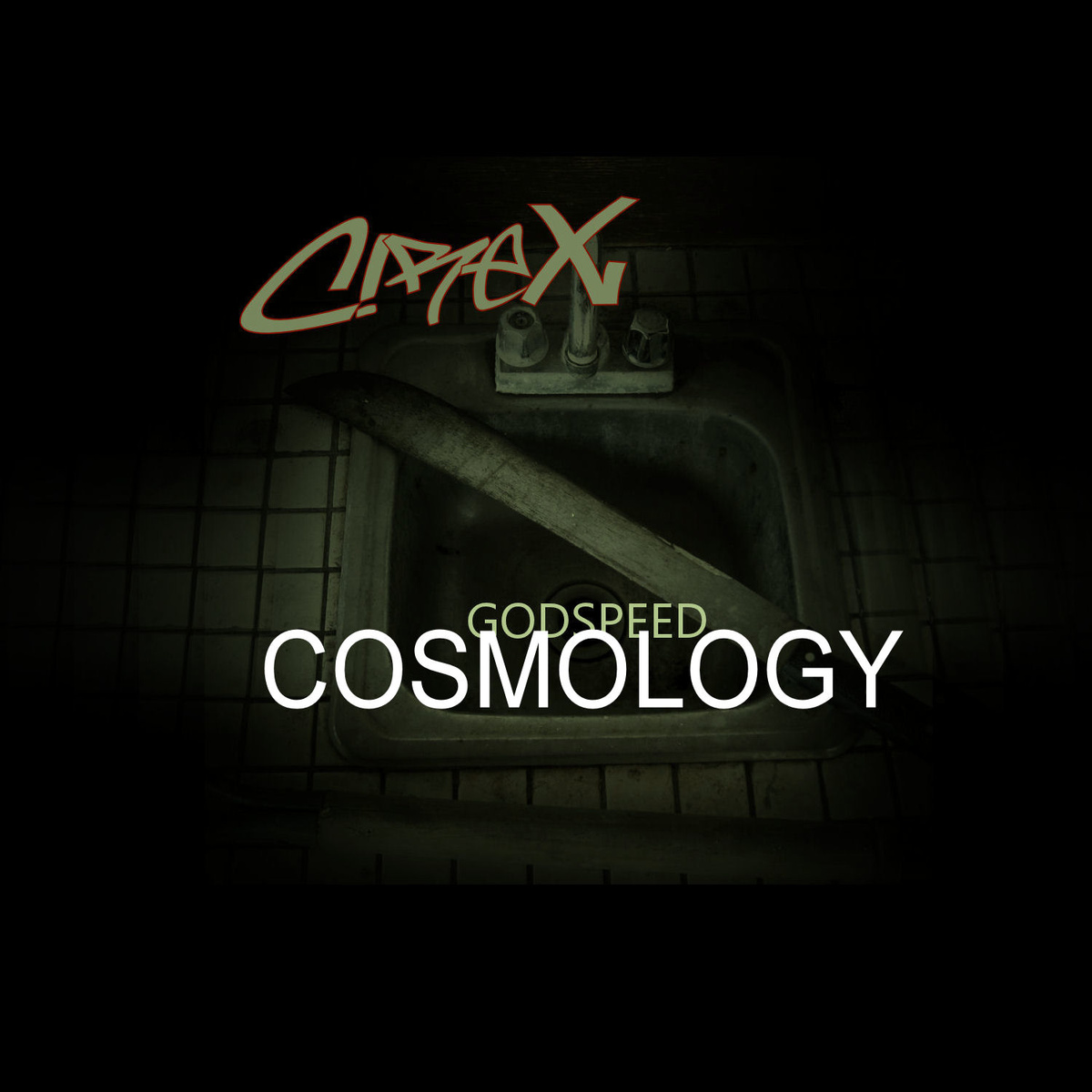 Back with more music that’s more likely to convince you that every car-alarm in your neighbourhood has gone off at once, rather than your stereo being turned up in full, is Puerto Rico’s own extreme IDM innovator, Cirex. Last time we heard from Eric Ortiz, the mind behind the music, was actually not all that long ago – and for cuts and edits as complex as the ones he makes, you’d naturally expect a longer gestation period in between work…but yet here we are! THAT, at least to me, is not only an example of a guy that spends his every waking moment in a pair of headphones dedicated to his craft, but also one that embodies the true spirit of the IDM influences that have paved the way for Cirex today. Those guys…champions of the genre like Squarepusher and Aphex Twin among others…they never stopped for a moment either; their own underground releases, EP’s, Singles far outweigh the amount of songs they’ve put out through ‘official albums.’

But hell, at least the guy gets to keep his name. Imagine the rules on literature back in the day when Stephen King had to write as Richard Bachman applied to the work of artists like these and Eric in Cirex…they’d end up with ten or more pseudonyms just to keep up alongside their own creativity!

Also like these aforementioned giants of IDM, Cirex has yet to waste a millisecond of my time. After reviewing his last full length album Trialism, I just can’t imagine how on Earth the guy might end up letting us down on his new EP Cosmology…it just can’t be possible. With the skills Eric possess and his gift for production, editing and assembly – his strength are too numerous to list, truly. In making music through Cirex, he has audibly put in every moment he’s been able to into his music in order to get this new offering to us so quickly…and my money says that he’s already back in the studio hard at work on a whole new set… So keep up! Push play on this new EP…drop a coin in the slot and start your jukebox up…whatever you gotta do – get into the music on Cirex’s Cosmology EP before you give him the chance to squeeze in another album in between!

Really though…many of you out there reading are artists yourselves. Is there anything better than hearing the hard-work and effort you put in come out onto a golden recording? For those of you out there that don’t spend your lives in the studio-booth, I’ll answer for them; NO, no there’s NOTHING better than that. Once again hearing the music, precision, sparkling-production and performances come out like this for Cirex is a real testament to HOW this guy hears and takes in sounds & his incredible abilities to translate that back to us in his own atmospheres, textures and musical-landscapes.

An EP that I found progressively gets better and better from start to finish; that doesn’t mean that Cirex doesn’t come blasting right out of the gate on the title-track “Cosmology” – cause he certainly does. With drum-beating intensity, quickly switching low-end rhythms and all the IDM glitches, sparks, beeps and electro-riffage you can stuff into three minutes – this opener gets you right back into the world of Cirex. I’ll fully admit, as much as I love his music – it HAS been a little while since my last listen and this was a completely welcome venture back into his sound. For IDM – I think what impressed me most about this opening track and the cuts to follow that make up Cosmology, was that the overall sound is bizarrely accessible in a weird way…like, I think that the IDM itself here is presented in a masterful way that a lot of people that think they DON’T like IDM would find themselves thinking otherwise if they were to jam this EP in their stereos.

Think about that for a second dear readers/Mr. Eric Ortiz…saying things like ‘accessibility’ and ‘IDM’ within a single sentence is far, far more strange of a combination than anything you’ll find in the genre itself and a true compliment to his crossover appeal. You can call me crazy if you like – but doesn’t “Godspeed” just amp you up beyond belief? This song explodes instantly, switches and changes masterfully and has an intense melody that drives the entire piece in a boldly cohesive way that still challenges your ears – they’re just a lot more ready to accept this crazy onslaught of sounds presented in this rhythmic style. Excellent breakdown, great comeback – “Godspeed” is a real winner for Cirex.

Starting out with a vocal sample for “Revolution,” I really enjoyed just how much all of these songs fit together on this EP. I could see an argument for “Revolution” almost being a little too close in sound to come right after “Godspeed,” but at the same time it’s that cohesive sound that’s leading this entire EP to victory; that is to say, if you like one, you should like them all. “Revolution” also finds itself in a pattern of much more traditional-Cirex-style towards the middle with its A.D.D.-inducing switches and creative beat structure.

The somewhat official ending comes at the fourth track, “Barometer.” I say ‘somewhat official’ because if you’re IN-THE-KNOW…you’ll have already downloaded the Cosmology at the extreme value it’s put out at and received THREE bonus tracks…we’ll get to those… “Barometer” is perhaps one of the more diverse tunes in the Cirex catalogue and certainly on this EP; it’s led in all kinds of directions from sharp electro-cuts & drops to bursts of vocal samples…it’s a unique track to the EP and overall sound somewhat, but still recognizable completely to Cirex and still has enough beef to compete with the former three tunes. Towards the end is awesomeness…for some of you, maybe not as much – it’s definitely where Eric heads off the deep end and into his headphones, absorbed in his craft and the incredible sounds he creates.

Cause you see…Cirex is about more than the money. And as much as I already KNOW he appreciates his fans from what I see on his social media pages and relentless dedication to music – at the end of the day he’s not writing from a place of feeling like he needs to BE accessible…that’s just something magical that happened along the writing process this time out. I can’t see him sitting there behind the boards really trying to figure out what frequency is going to get you to the dance-floor…no. He’s making the music he loves, knowing full-well that if he’s loving the bizarre tones, melodies, sounds and frequencies he’s creating, that there’s gotta be several dozen freaks like ME that are going to LOVE it just as much.

And for those of us that DO love it – he’s released bonus tracks along with the EP. “Smash” is a great track…almost sounds like it has a sample of The Who’s “Teenage Wasteland” running in behind a piece of it…that could be just me… But armed as always with the energy, intensity and immaculate precision you’ve come to expect – “Smash” already makes your purchase worthwhile in a shifty-electro experience that keeps you guessing. “Sodio” brings it every bit as real, if not even REALER.

Good lord. Look at that sentence. I’m a journalist?

Anyhow…”Sodio” is an unreal experience with the way it comes at you, shrinks away and backs off, expands, contracts and damn near tries to kill you. This second to last-cut on the expanded edition of the Cosmology EP is another beauty; a real exercise for the ears & mind as you try to keep up with the multitude of ideas that Eric is able to house within a single song in his work as Cirex.

Ending with “The Perfect Design” – this was a must-include for sure and I’m glad this song has been made available – it…is…MASSIVE. And take THAT all you people too cheap to pay the $1 he’s looking for retailing the Cosmology EP – you are truly missing out on one of THE BEST that Cirex has ever come up with if you’re not getting this song as well. “The Perfect Design,” more than likely offered up as a bonus as perhaps it doesn’t quite ‘fit’ the cohesiveness of the EP itself, is an electro-track that would make ANYONE proud to have written, no matter how superstar they are or how many they’ve already got under their belt. This is IMPACT. These are bold sounds, mixed together with an expert hand in ways that are ridiculously joyful to the ears and mind; combinations that will certainly bring a pixelated smile to your whole electro-lovin-face.

As much as I’ve obviously enjoyed the Cosmology EP – I can’t imagine life without “The Perfect Design” now that I know what life is like WITH it. Thank you Eric – I really appreciate what you do and the music you make, but really more-so how you always come at it with energy, innovation and enthusiasm. “The Perfect Design” is such a marvellous indication that even the high-level of performance you’ve reached still has room for you to push, challenge yourself and continue to grow in all kinds of ways. I never know what sound to expect next – and I’ll always love that incredible gift of musical-surprise in these bright bursts of electro-creativity.

I’ve said it before, and that’s exactly why we’re here again today – Cirex is an artist to watch and listen to with an intent-eye & ear – there’s a real professional here in production, performance and writing.

Find out more from his official page at Facebook here:  https://www.facebook.com/cirexlab