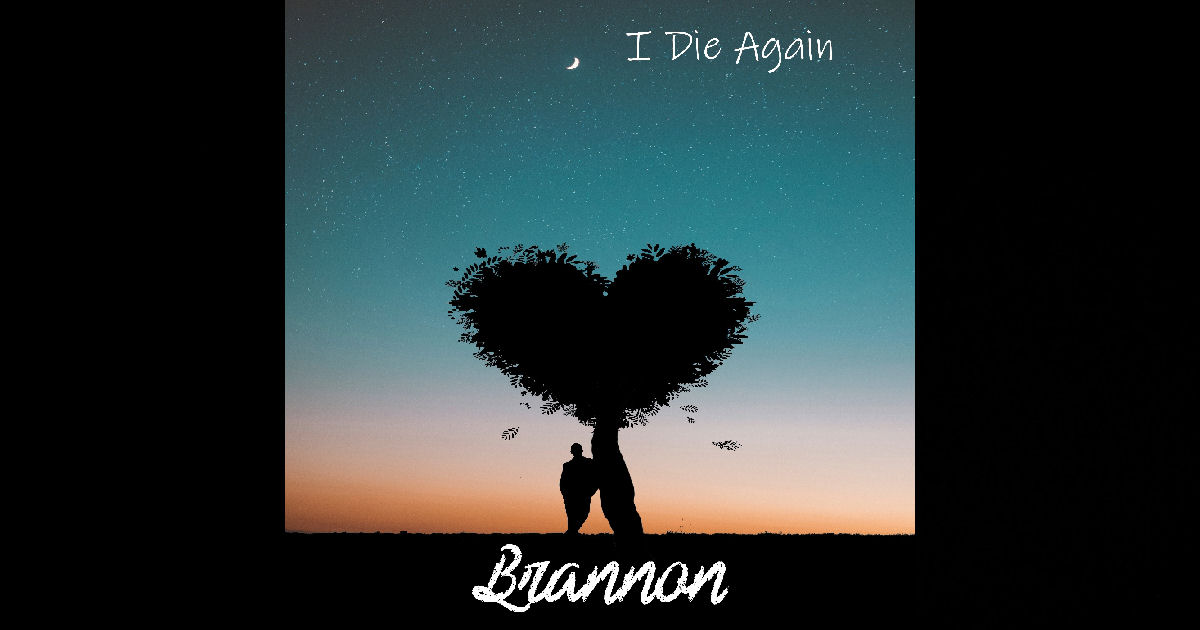 Alrighty…so…kind of a strange cut to review in a way.

Technically, according to the notes I’ve got here, “I Die Again” dates back about thirteen years…according to Brannon himself, it was the second song he’d written & was proud of…and yet somehow…well…I suppose it sat on the shelf like so many good ideas & songs do until it’s their time.  So…yeah…like I was saying…strange to review a tune that reveals the early-side of Brannon’s writing through the approach he brings to music here in the present-day now.  “I Die Again” has been fully re-recorded from the ground up…he’s got the original producer Nigel Cuff, and an assist from David Cagle on vocals, mixing & mastering via JK Northrup at Alien Productions Music…and I’d say it does reflect the signature BIG sound of Brannon that we’ve come to know over these past years of listening to his tunes.

I think a lot of musicians out there can certainly relate to the whole timing-of-a-song thing…whatever the reasons may be, whether it’s to rerecord, revamp, revitalize, or restructure – there are always plenty of valid reasons to revisit material from your past and mine it for all the gold you came up with way-back-when.  Especially in the case of a song not getting the fair shake it deserved the first time around – bands/artists evolve each and every day they’re immersed in their art…songs can also grow in that same respect; you combine the two, and that’s every reason to give a song a second-life if you feel it deserves it.  I hear a song like “I Die Again” and it’s practically a foregone conclusion that Brannon fans would love this…so when looking at it from that angle alone, obviously it was a worthwhile venture to recreate this cut and bring it into 2019 with a shiny new update.  Then of course, you can factor-in the fact that Brannon’s just about one of the most reliable artists out there when it comes to the overall quality of his tunes…whether it’s the performance or the production, he’s always got something spectacular goin’ on.

All this good stuff being said…I think it would be a disservice to say it’s the best we’ve heard from Brannon…and that’s completely because he HAS evolved as an artist over the years.  Best example I can give ya, is probably something like “Better Man” by Pearl Jam; if Eddie wants me to give him all the credit in the world for the writing he was capable of when he was only fifteen or sixteen when he wrote it – I likely would…but once he’s all grown-up and we’ve heard a stronger version of himself, it makes it tougher to go back, no matter how solid & golden those hooks are.  Don’t get me wrong – I’m JUST LIKE YOU and I love that song just as much I’m sure – all I’m saying is, that by the time we’d heard it, we’d also experienced the depth he was able to put into records like PJ’s Ten and Vs. – to hear that in a more simplified variation, was…well…strange!  And that’s what I’ve been gettin’ at here I suppose – whether or not I’d known the official timeline & story of “I Die Again” or not, I’d have heard the young songwriter’s attempt at traditional songwriting here – know what I mean?  Ultimately, it’s bulletproof when it comes down to the hooks you’ll hear, how it’s sung, how it’s played…all that stuff is good, great, or even better – but we have heard a more genuine & sincere connection from Brannon & his music in the past by comparison.  Is “I Die Again” a quality tune?  Of course it is – it’s BRANNON – dude’s always got the corners completely rounded…and to expect a massive lighters-up mid-tempo style tune like this from him is certainly fair game – there’s every reason to support this song having the chance it deserved once before long ago.  But I think it would actually be truly misleading not to point out just how much Brannon has evolved past this tune at this stage in his career & with his songwriting in the here & now.

Look.  We all make music for a hundred-million different reasons.  Sometimes it’s to create something fresh, sometimes you revisit past material, sometimes you’re looking to get some closure to a journey you started but never finished…this list could go on & on and every reason would be equally valid to me.  I feel like in the case of “I Die Again,” it’s likely the latter of the three scenarios I’ve quickly pointed out – I feel like Brannon went back to take care of some unfinished business with this single…if it’s been in the back of his mind for the thirteen years it has technically existed for, that’s always a sign there’s something special there, and who knows – maybe finding the right time to get this track to its full potential has been eating at him for several years.  Just getting a song FINISHED can be a victory y’all.

For me, when it comes to like, favorite parts of the writing & performance here, it’s probably easily the end of the verse/pre-chorus…I dig the soulful way that it’s sung all-around really, but that one tweak in the final line as the verse shifts into the epic nature of the chorus…that’s pure gold right there and a HUGE TINY hook that’s just a fraction of the song!  Like I’ve been saying from the get-go however, it’s Brannon the ever reliable – you’ll find plenty to dig about “I Die Again” from its sensational surge into the grip of the chorus, to the melodic chops on display through the verse, sparkling guitars, crispy drum snaps…or again, if you’re looking for a tune designed to stimulate the ol’ emotional side of ya, you’ll find a lot here to love.  Whether it’s the full-on best of the best from Brannon might be up for debate – but whether or not “I Die Again” is a rock-solid tune full of single-worthy sound, definitely isn’t.  Tough to find any faults in what this dude creates…it’s all tight, well-played & well sung…but all that’s kinda to be expected from this high-caliber artist.  He’s capable of extraordinary things; it’s only by comparison to material he’s put out in the past that we know the full-scope of what that really is.  Brannon’s got himself another strong song for the catalog, and one that proves he’s had stunning potential all along from the very beginning – “I Die Again” is a cut that’s bound to satisfy his fans out there listening.

Find out more about Brannon from his official homepage at:  https://www.brannonmusic.com