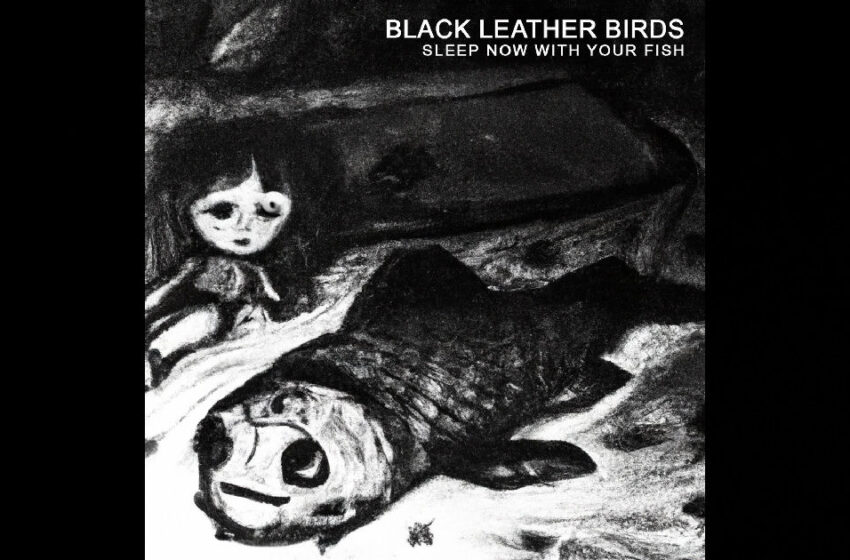 …Black Leather Birds showing up around Halloween with a new single to haunt your speakers & screens.

It’s comforting when things find the right place where they fit, no matter how odd or bizarre they might be.  When I first had a chance to hear A.G. Syjuco’s side-project as Black Leather Birds last year, there’s no doubt that I became an instant fan of this dark artistic project – like I said, some things in life just make sense.  Everything about Black Leather Birds is anti-typical in the most brilliant of ways – and that’s enticing to me – I love the way A.G. digs six-feet deep for inspiration & comes up with such uniqueness.  For anyone that follows the guy’s music, I’d imagine that we’re all attached to that aspect of what he does, whether it’s in this side solo-project, or when rocking with his family-based band, Jack Of None.  The dude creates genuinely gritty and daring audible art, and this new single embraces that completely.

Right from the drop, you can feel the bone-chilling nature of “Sleep Now With Your Fish” as the master of audible creepiness & subtle intensity begins to weave his dark web of sound.  A.G. is never afraid to dive right into vibes that would make most people turn all the lights on in their house, so it should be no surprise to learn that “Sleep Now With Your Fish” heads into that similarly terrifying sonic terrain that we love the guy for.  Syjuco has truly carved out his own niche in music – both Black Leather Birds and Jack Of None appeal to those out there looking for something shockingly different & superbly executed.  I still can’t get enough of the first Black Leather Birds EP called The Color Of Memory…that’s a record that probably should have been added to my top ten last year in retrospect…that experience still holds up seriously strong.  Talk about memorable – I hear these songs in my nightmares even when I’m awake.

If it was JUST horrific or…hmmm…let’s say, material that makes you feel the dark side of sound in a very real and sensory way…that probably wouldn’t be enough overall – it’s the fact that A.G. takes such an artistic approach to it all that makes the difference entirely.  Passion, interest, and engagement are things we can all hear – and everything this man does is fully loaded with all those essential ingredients.  He’s authentically invested in the craft of making music, and loves every micro-detail in the process – he’s an audiophile at the end of the day, and of course being one myself, it’s something I appreciate about him.  “Sleep Now With Your Fish” has that malevolently exploratory sound he creates so perfectly, and I have all the confidence in the world that his existing fans all over the world are going to love this new slice of devilish deviousness.  Not only did he rock the music as he always does with killer guitars & irresistibly wild elements added into the atmosphere & production, but he also took on the vocal duties for what’s rumored to be the first time EVER as well – which I’d imagine, based on this experience, he’ll continue to do in the future too.  I’m all for it!  Don’t get me wrong, his music speaks volumes on its own and always will – but he should have a voice in his solo-project – Black Leather Birds is all about creating his own art, making his own rules, and expressing himself however the fuck he feels like, you follow me?

What I think people will actually love even more about “Sleep Now With Your Fish” is the video that comes with it.  Or perhaps, more accurately, I think that’s the aspect of this single that could draw in people that are more on the fence about the music itself…like as in, if a song like “Sleep Now With Your Fish” makes you uncomfortable or squeamish, which it might – the video would come in to confirm the artistic merit of a single like this visually, and give a track like this a second shot at making an impression on those that might have been unsure about it.  Make sense?  Context matters in so much in life – and seeing how this plays out onscreen makes a big difference – even in the event that you DO dig on what you hear already, like I do.  I felt like Black Leather Birds had already come up with something badass to experience and I would have been stoked about this cut if it was only the song itself – but then seeing the video took this track to a whole other level.  It’s AI-based, black & white, animated awesomeness if you ask me – and a perfect complement to what we hear.  It’s gnarly!  It supports that raw grittiness and the mysteriously curious sound we hear in “Sleep Now With Your Fish” and more of that, is always gonna be a great thing.  A.G. continues to delve as deep as he possibly can into the art of his craft, and as a result, he’s continually thriving within it, creating exciting new aspects of his music by pushing himself creatively, giving us all a remarkable body of work that’s an authentic contribution to the scene.