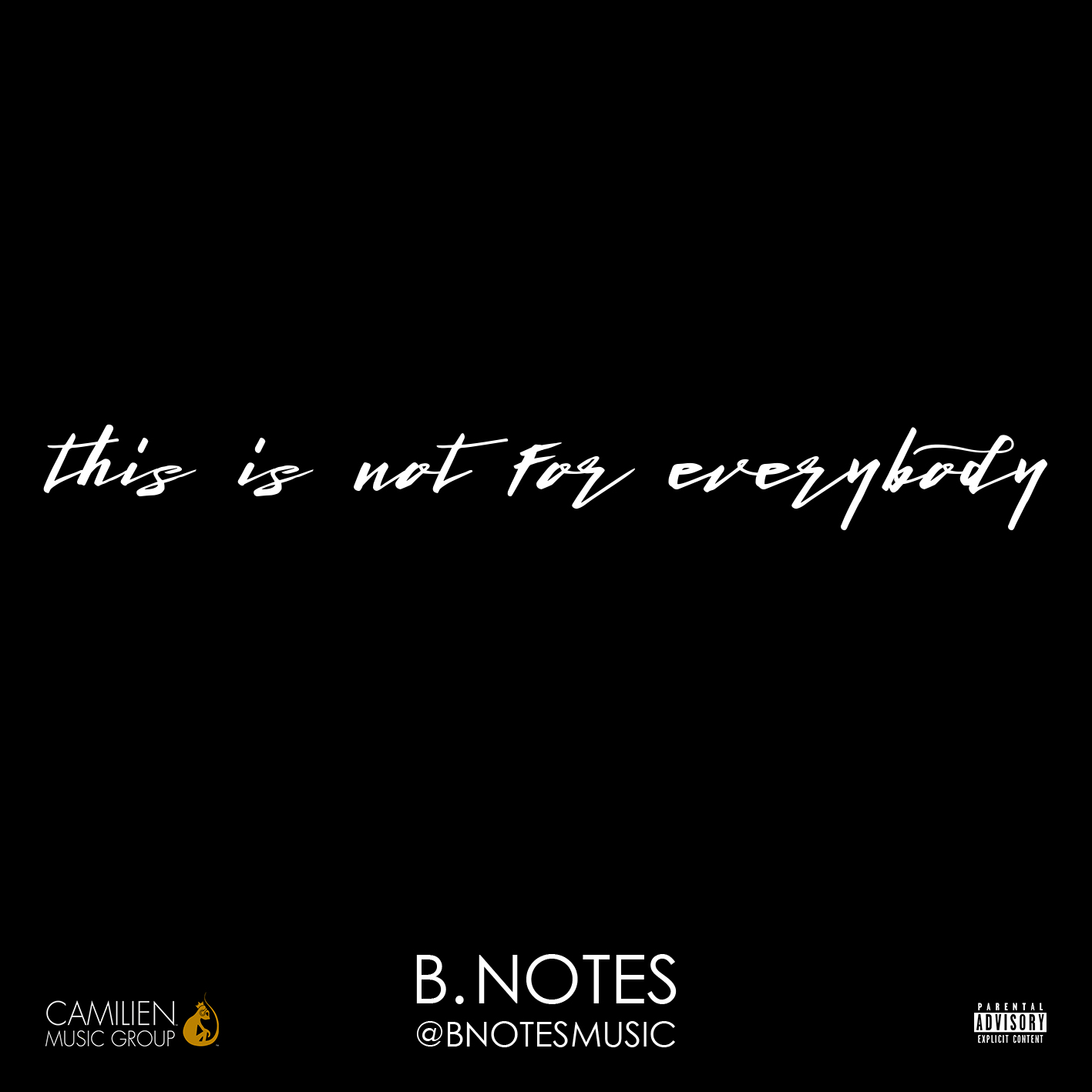 B. Notes – This Is Not For Everybody – Mixtape Review

You’ll notice when you look into the music of B. Notes that this guy has a resume that speaks to that of a true entertainer.  Singer, rapper, songwriter, actor – B. Notes covers the map with all the right skills necessary to be captivating in today’s modern-rap & trap-music scene.  Haitian-born and Brooklyn-raised, you can hear the sound of the streets authentically stamped into his music…every sound you’ll stumble onto really seems to represent him in-full – you can hear that in his confident approach.

Like any great mixtape…he keeps the music flowing logically with subtle transitions that make sense in the sounds between each track.  He almost sounds like he’s joined the band Bloc Party for a moment at the beginning of “Laurie” – which ended up being an extreme standout song for me on this record.  The approach is intensely different here…so far I feel like this combination here is really something we’ve yet to hear from B. Notes…it’s still on home-court and dynamically-supports his every move on the microphone…but there’s some really genius moments completely unique to his own sound here.  Big thumbs up to “Laurie” – I think the sample & beat are incredible, I think the vocals are exceptional…big, big win here.

You instantly get a sense of range when you dip into “Honeycomb.”  About 180-degrees different than where “Vanity” started us out…”Honeycomb” is much more towards the Jason Derulo style than the first track was.  The mixtape begins like something you’d hear from The Rich Homie Quan and quickly ducks into a much-sweeter sound in the second cut.  Quite honestly, “Honeycomb” has all the makings of a modern-day hit in R&B…I’d be all over this song as a potential single for sure, everything from the performance to the editing and production all really pop-out perfectly.  “

I ended up diving into the low-end heavy track called “Vanity” on This Is Not For Everybody, the new mixtape from B. Notes.  This track pounds out the bass-tones solidly while the man himself works his voice into the music like a menacing instrument.  B. Notes sets the vibe quickly on “Vanity” – love the production on the song, right up to and including the coughing and background vocals contributing to the track’s overall atmosphere.  Musically it’s actually intensely minimal…but you’d never notice; this track looms large and casts a giant shadow as it stands-up tall in the first moments of my experience with this mixtape.

I’m a bigger fan of that kinda sound personally than I am of something like “2 Bitches.”  I mean, I get it…and there’s no doubt that B. Notes is just as talented doing this as he was doing a style like on “Honeycomb” or “Laurie” – just was a tough this to return to after “Laurie” I think.  As I’ve mentioned many times in reviews…sometimes the toughest thing on a record can just be following up a really killer song.  I think that “2 Bitches” does everything it can to stand out…it’s got a seriously unique vibe to it with a beat & choral-melody combo…but yeah, tough spot coming in after “Laurie.”  Less the song’s fault than it is what I’m finding I really dig about B. Notes music, still good, just not my favorite.  I think he’s got a real gift for the R&B/Soul side of music…and I think a track like “Netflix & Wine” confirms that.  Again, makes it tough for “2 Bitches” to stand out the way it maybe should, because it’s sandwiched right in between two tracks executed perfectly.  Smooth as he gets throughout the mixtape, with excellent drum sounds leading the minimalist melody, “Netflix & Wine” keeps this grind gliding on pillows of air like a Cadillac cruising down the strip.

Bringing it closer to the Wiz Khalifa vibe on “No Regrets,” B. Notes takes on a huge pop/electro vibe to begin the incredible hooks that fuel this mid-track of the mixtape.  Big, rubbery low-end bass notes in the verse, used with excellent production and performance of the vocals…but yeah…it’s all about the chorus here – “No Regrets” is a massive hit just waiting to happen.  LOVED this cut.  “Run Run Loose” follows it strongly, and really brings that rubbery sound to the swell of the bass loud & proud.  A real club-banger…”Run Run Loose” takes the music back in the low-end direction again…but as I’ve pointed out, B. Notes can’t seem to fail no matter what style he takes on.  His confident approach and spot-on tone & flow have put a vibrant energy into this music and mixtape.  You can hear it clearly in “Apple Pie” – another tune that B. Notes puts the full-vibe & groove into with an electrifying set of hooks you can’t ignore once again, all delivered flawlessly…he’s right into this moment and you can hear it in the flow.

As if it couldn’t continually impress any more than it has…”100K Miles” is a real gem.  You can absolutely hear how big this song could be – I think this song represents some of the best of B. Notes emotionally and in his performance.  Great dynamics in the song, powerful emotion and a real soul & heartbeat driving this song – “100K Miles” might arguably be one of the strongest songs of the genre that I’ve heard this year.  Really powerful stuff…uplifting, beautiful…it’s a massive accomplishment and flat-out great song.

“No Panties” again shows the strength of the material and the range of the man himself as B. Notes brings it all to a sexed-out style in a song decked out with huge dynamics and gigantic hooks pulling you from the verse to the chorus.  Great vocalizations in this cut…really smart stuff happening in the background to support the main set…the flow and confidence remain the star as B. Notes demonstrates highlight-hook after highlight-hook rolling through this smooth cut.  Made it a little bit tougher for me to jump into “Shots” afterwards…even though, gotta admit, the beat on this cut is siiiiiiiiiiiiick.  The low-end signature rubber on the bass-drops and the wild-electro…”Shots” is undeniably a party track, but yeah, was a little bit rough and menacing compared to the tender-moment you just got with “100K Miles” – but if nothing else, you can certainly appreciate the versatility of what B. Notes is achieving here.

Sticking with the harder-edged side of the chip on his shoulder & music – “Kill A Man Dead” takes a serious vibe to the next-level as he rips into a beat that sounds downright dangerous.  Music for slow-rollin’ limousines with half-cracked windows rolled down and a set of ballin’ shades peering out from in-behind.  At least that’s how I hear it and see it going down…maybe that’s just me…

“Thursday” keeps the low-end thumpin’ and the message serious, but the music itself is extremely clever and inventive here.  Big-ups to this track…really smart movement and flow from the main-lines in the verse to the way it cuts away to a tenderized verse to follow.  Great atmosphere in the music once again and severe amounts of depth to the mix & the music…gotta say, of all the tracks on This Is Not For Everybody that are in this particular style…I thought “Thursday” perhaps did it all best.  There’s a great combination of what makes B. Notes entertaining as all-hell here on “Thursday” while he takes you to the shadiest church you’ve heard in music.

“Ride With Me” would immediately try to wrestle “Honeycomb” for those top-single honors though…its smooth beginning is incredibly inviting.  Piano-infused and gentle in its approach, “Ride With Me” has a truly brilliant vocal-flow to it that rolls along comfortably in effect-infused glory.  Definitely a moment that’s single-worthy once again – you can hear that B. Notes has a real grip on what’s happening out there in music right now and has definitely used that to his advantage in his songwriting – he’d fit right into the mainstream music-culture on any of these tracks, and for all different merits.

What I really like about B. Notes is just how clear you can hear the strength of the connection he has to the music, the samples & beats – you can hear that he really feels this.  “The Barber” is a perfect example of him getting right into the flow and owning that hook & melody with confidence.  It plays like a perfect combination of the first three tracks, keeping the mixtape flowing perfectly logically to the brain with an excellent progression.  Flipping between rap & soul for a real textured experience in hip-hop overall…great atmosphere and approach to “The Barber” – and right now, kinda seems like B. Notes can’t help but be entertaining when it comes to the material on This Is Not For Everybody.

Bringing up the energy for the final moments with “458” – B. Notes hits the sweet-spot one last time doing what, in my opinion he does best.  He’s got a great sense of what works for hook & flow, sample & beat, performance & rhyme every single time – but you can hear how hard this guy must’ve worked to perfect his thang on a track like “458.”  B. Notes has done  an excellent job of keeping this mixtape fully mixed-up with a ton of different textures and tones…and it’ll always be up to this artist on which way he wants to take it all.  He can go the route of writing nothing but hit-songs, cause he’s clearly capable…or he can go the artistic route that he’s taken many times here on this mixtape and continue to create songs that go beyond the radio & the club.  The world of possibilities and options should be wide-open to an artist with this much skill…I can’t see anyone out there that wouldn’t find something they love about this record.

Tags: B. Notes Mixtape Singles sleepingbagstudios This Is Not For Everybody