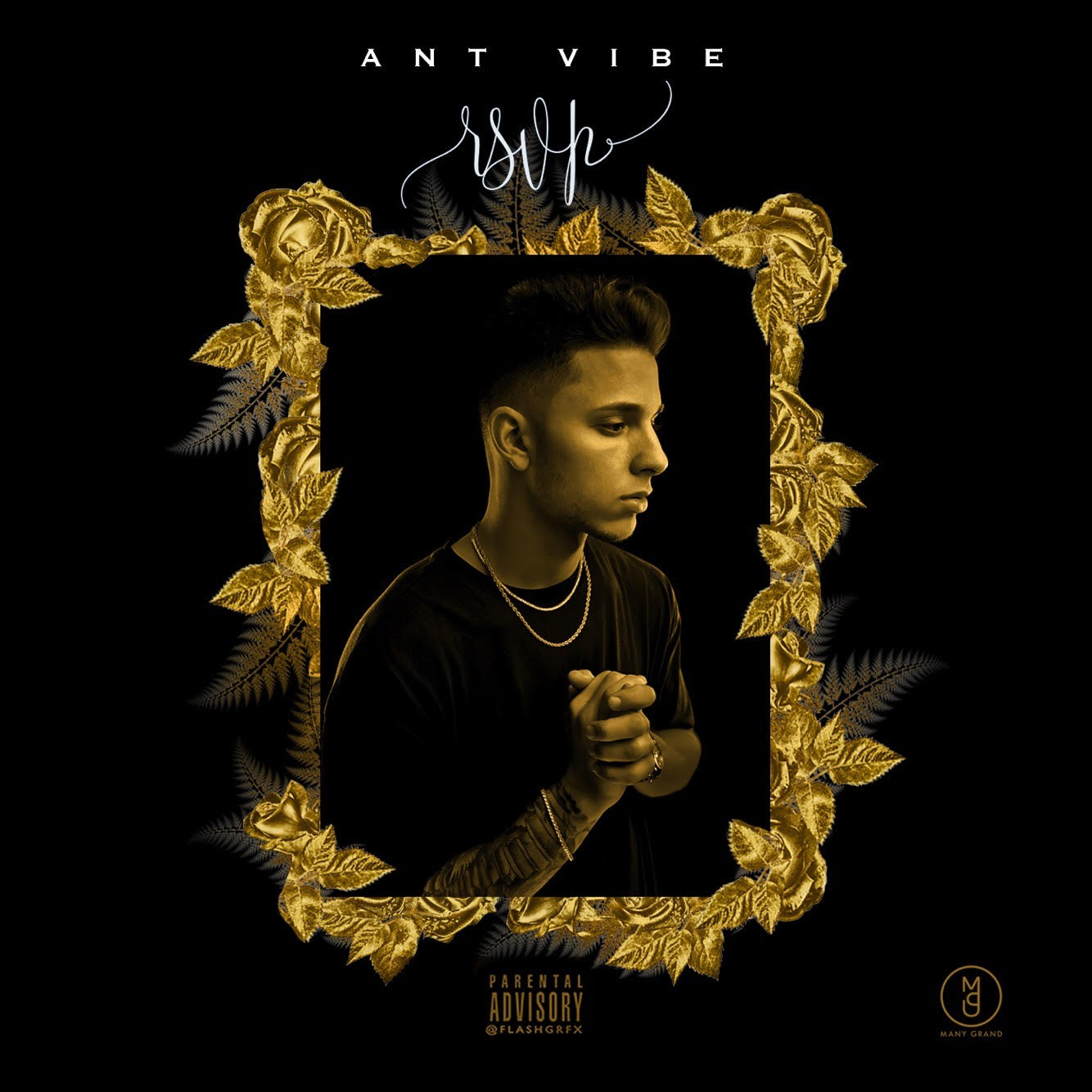 Ant Vibe impressed us in March when we heard him laying down singles in preparation for this very moment, the release of his album RSVP – so I’m back to talk a bit more about the songs on this record.  Even though I was digging what I heard from this skillful young emcee – only one out of the four tracks we checked out earlier this year went on to make the official lineup of RSVP.  I’m not all that surprised – this guy clearly likes to keep his sound fresh and his material relevant as possible…even though it’s only four months since we heard him for the first time at sleepingbagstudios, it makes sense to me that this guy has already moved on to newer stuff…seems to me there’s a lot of creativity & enthusiasm in AV.

I’m pissed cause I can’t recall where the freakin’ gorgeous guitar sample that fuels the melody in the music of “No Option” comes from…I know I’ve heard it…hell, I might even listen to it on the regular but for some reason right now it’s escaping me.  Anyhow – this tune, which opens the record in an extremely comforting atmosphere, starts out the smoothness, professionalism and precision that you’ll hear in the music of Ant Vibe on his new album RSVP.  Dude knows his way around a set of bars, let’s put it that way – but notice he’s also laying out the blueprint for his journey on “No Option” – letting you know right off the drop that he has GOT to make this music…it’s not just a ‘want.’  He flips between rhythms, pace, tone and tempo throughout the track…handling the beginning of the track as gently as the music sounds before letting it rip and busting out a highlight flow just past the two-minute mark.  For those wondering if Ant was gonna take it easy and just chill from the opening moments of “No Option,” he’ll quickly silence the doubters with the inspired transition he makes in this song between the slower verses to a much more intense speed.

“Inside J” featuring King Los steps up the energy right away on the record, following “No Option” as RSVP shifts gears.  Creative beat & sample combination…massive low-end sound and a seriously wicked performance from Ant Vibe in the hook.  Excellent editing on the vocals and I’m loving the confidence you can hear from AV in his verses.  King Los steps to the mic with serious character and personality…he’s clearly skilled and does a solid job – but admittedly, his low-key tones make it a bit tougher on him in the mix; it’s either that or Ant’s own enthusiasm is off the charts on “Inside J,” which is certainly also a possibility.  Compared to Ant, King Los comes out sounding like he’s mixed in at a slightly lower volume, but in the end still triumphs with a rad verse – he sounds right into it…turn him up!  Ant really makes the main hook of the chorus of “Inside J” work insanely well…the way he draws out his syllables or paces the words…it’s clever & memorable stuff; the added post-production effects and editing on the vocals of this cut sound great on both emcees.  I stand by my comments on King Los…turn him up…other than that, the way they actually sound tone-wise, is bang-on & on-point.

We’ll jump to the middle of the record and then maybe cruise to the ending to see how this all concludes.  “No Mo,” right in the center of the album at the number-eight spot is definitely a great cut to have sent out – you get a serious dose of AV’s personality on this track.  Whether he’s lining up the next joke or laying it out the facts straight-up, he puts solid imagery into the words you can relate to, understand or easily vision.  A track like “No Mo” is a perfect example of what I mean; SOME people out there, might be able to relate to this…most others out there, probably ain’t living this life – but they will understand what he’s rhyming about due to the creative descriptions and rad lines he writes – you can vision the life even if you’ve never lived it or even if you’re just not livin’ it “No Mo.”  Dig the jazzy, old-school sound to “No Mo” and Ant continues to impress with his confidence and flow.  Some of these lines are funny as they get…again, if he wants to bring it all to a real place, he finds a way to do that through a smooth transition…but you’ll know for certain which ‘mode’ he’s in and exactly how to take the words – he’s an expressive & precise communicator on the mic.  And as if you needed another reason to check out “No Mo” – the chorus hooks on this cut are sickly good…really dig what he’s come up with on this cut in the middle of the record & seems like everything is still on the right track on RSVP.

So how does it end?  It ends with a cut called “What’s The Deal?” – a track that begins with a haunting sample before subtly-bursting open through the music and exploding with energy through the vocals.  Clearly Ant Vibe went for it on “What’s The Deal?” and made sure to give you that reason to RSVP right at the end of the record in a final highlight.  Understand that I’ve been telling you this all along…right from the beginning of this review, talking about “No Option” and that moment where he flips the switch for the first time…and just how capable this emcee is when he flexes his skills & speed combined.  “What’s The Deal?” is like Ant with the pedal pressed firmly to the floor – he lets the lyrics rip on this final track and hits every part of the metering & flow with sick & slick professionalism.  Winding tricky lyrics through really unique samples & beats seems to come really naturally to this guy…and when combined with the confident way he writes & performs – he’s got a serious amount of charm & character that demands to be listened to.  I’ve checked out the rest of the cuts on this album…he’ll give you plenty of reasons to get right into this record with wild & inspired performances…he’s definitely sounding on his game throughout the entire RSVP album.  It’s been a solid ride.  “What’s The Deal?” is an electrifying performance and a giant highlight that occurs right at the end of the record…the kind of ending that’ll make you instantly want to repeat the experience from track one forward all over again.