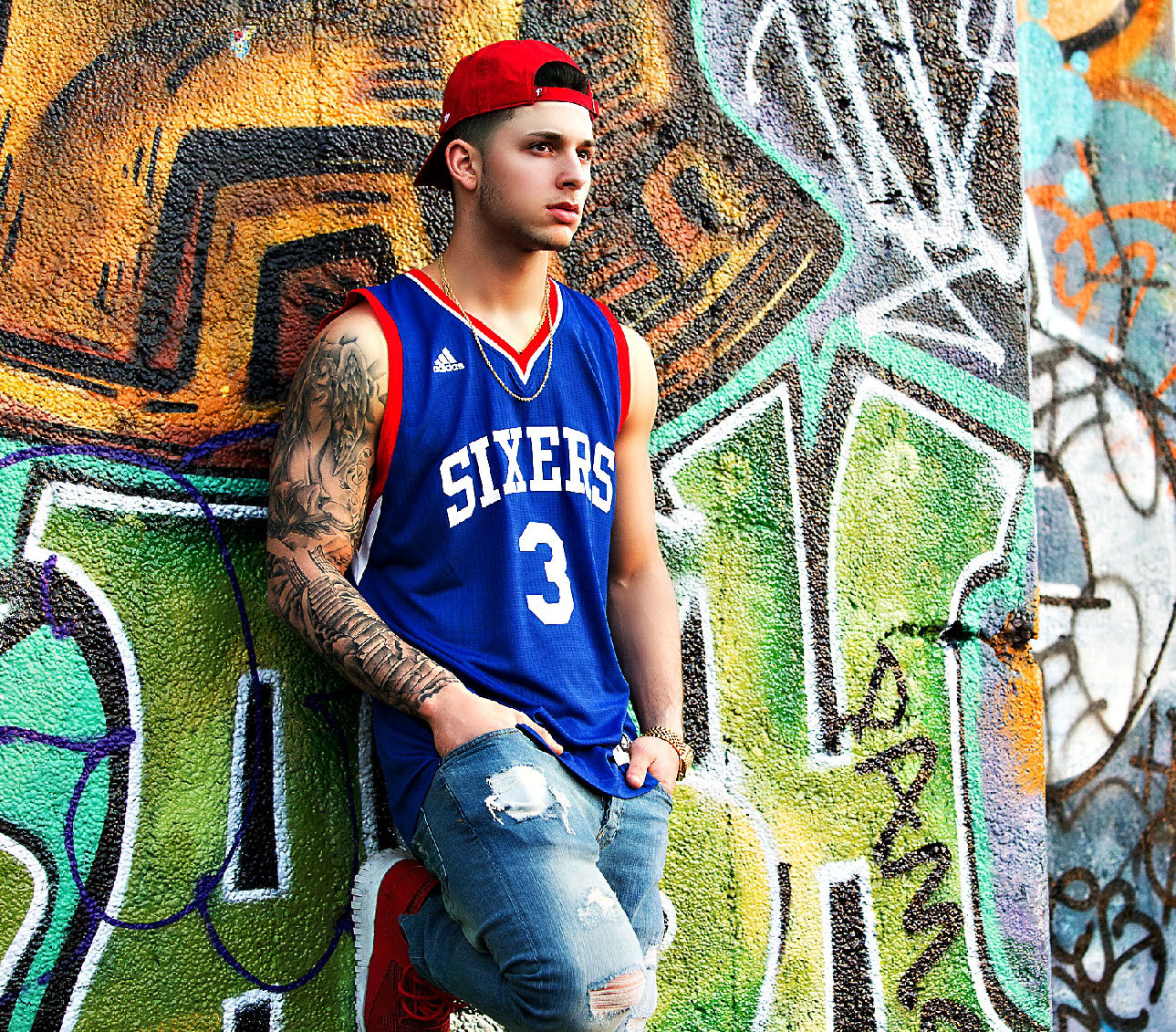 Only twenty-three years old…seeing the parental advisory warning on each cover for these singles always makes me brace for something written beyond an emcees experience and/or time on earth; it can be a pretty tough sell to communicate authenticity without living the story, know what I mean?  And here’s Ant Vibe out of New Jersey…he’s not even a quarter of a century old yet…is it possible to have lived out the backstory of the music so hard that it warrants a parental advisory now?

I’ll say this…the reality might be that it could go either way when it comes to how hard Ant Vibe has grown up on the streets…I don’t know what path he’s taken to get to where he is today; what I do know is that if you were to judge by the passion and professionalism in his music alone, you’d swear he’s lived and breathed every word he spits into the mic.  The confidence, precision, energy and style are immaculately on-point – Ant Vibe is reaching his potential bar-after-bar and proving that strong delivery takes the fictional element out of the music and takes it for a turn right into the REAL.

Like…take “Counting Money Up” featuring Sean Vegas as the example of what I’m talking about.  A rhyme this strong in the hands of an emcee that couldn’t command its power wouldn’t sound even a tenth as convincing and confident as Ant Vibe does on this cut.  It’s the absolute dedication he’s put into his craft, his precision in his metering & movement, the tone in his demeanor and delivery…you can’t help but hear a cut like “Counting Money Up” and immediately jump to the conclusion that Ant Vibe is indeed ready for the big-time.  This dude has SKILLS…and as “Counting Money Up” would suggest, he’s certainly ready to be paying them bills with’em.  Floating brilliantly between trap & straight-ahead rap spit unapologetically – I was already sold on Ant Vibe halfway through his first verse.  Emcees take NOTES – because THIS is how you come out swinging full-force on the mic with intentions to make a serious dent on the world and really create an impact listeners will remember.  As he rolls quickly through his lyrics – his confidence, tone, passion and precision NEVER drop for a solitary second; no joke homies – Ant Vibe is more than ready to make moves with his music and he’s bringing a set of sounds, styles and skills that people are sure to respond to & bond to.

A collaboration that really worked for me was the off-kilter auto-tune hook provided by Dylly on “Remember This.”  We’re catching up here at sleepingbagstudios right now – and that’s important to note; while this track might be new for us here at the studio this week – it looks like this one comes from his Pupil Music EP from mid-2016.  The three singles in review surrounding it today appear to be either singles or samples from his upcoming album Vibe…so I’m not sure how this one snuck in there in any other way other than to establish a beyond-solid first impression with us all.  I mean…talk about throwing in the ringer!  A completely top-shelf track and memorable set of hooks in the chorus combined with an ultra-smooth vocal-flow in the verse – I don’t know what it was that got this track included in the set I’ve got in review here but I’m certainly thankful I stumbled onto this one.  There is absolutely nothing to NOT love about “Remember This” – the good-time vibe in the music is brilliantly put together – the lyrics all possess the qualities of real writing…no matter what subject Ant Vibe writes about you get solid doses and great balance between the humor and the serious.  You can tell through his expressions and vocal-flow when to take him ultra-seriously or when he’s trying to raise-up the eyebrows on your face or bring a grin to your mug.  Bottom-line on “Remember This” is that the hooks are just purely out-of-control good…really impressed with Ant Vibe’s confidence level…it’s certainly justified from his own performances – but it’s also impressive knowing he’s willing to go out further on a limb with what could be perceived as a slightly bizarre-hook to listen to…because he knows it works.  What Dylly brings to this cut is INSANELY cool…it MIGHT sound strange at first…maybe…but I can tell you firsthand by the second time you listen to this cut you’ll be looking forward to the bright sound and auto-tuned melody in the chorus-hook of “Remember This.”  You WILL “Remember This” – I know that I will…I’m beyond impressed with what I’ve heard from Ant Vibe in these first two cuts and have zero doubt in my mind that this guy certainly has a future in music.

A track like “Too Many Bottles” is massively appealing and incredibly smart to me.  If you were to listen from a distance, you’d hear a vibrant club-beat, swift vocal-flow and stunning hooks from featured guest-star Desmond Dennis – but if you get right into this one, there are lines and lyrics you’ll hear pass by quickly and want to immediately hear this song again to make sure you caught what was really said.  Now…I could save you the trouble and just tell you that YES – you just heard what you thought you heard…whatever it was…believe me…that was probably exactly what you thought he said – BUT…make no mistake, “Too Many Bottles” is highly repeatable – so do that too, don’t just take my word for it.  You are going to want to catch these lines multiple times; they rip by quickly with AV’s signature style, sound & precision-approach to each syllable and beat but they also offer insight, humor, imaginations and descriptions in the lyricism you don’t wanna miss out on.  Musically, “Too Many Bottles” was a little less my style than the other two cuts by comparison, but not a single bit less captivating…I went right with him into this new atmosphere and style and did everything I could to connect my ears to the speakers in effort to absorb every word.  The added smoothness to the R&B/Electro-influence on the chorus from Desmond Dennis works really well and brings a whole other dimension into the sound on “Too Many Bottles” – also further proof that Ant Vibe has the ability to adapt to a range of styles and skills in collaborations & find the right angles to make them work to their full 100% potential.

Ant Vibe brightens up the vibe with “Find Me” and works the rhythm of the vocals like he’s got it on-tap in endless supply.  Verses are as solid as ever – but let’s face facts here…it’s completely all about the quick-movement and flow of the lyrics and melody-lines that makes the magic happen on “Find Me.”  Whether it’s the quick roll through the verse or the drawn-out syllables of the chorus – AV has made the most of every second with the vocals on “Find Me” and delivered a serious highlight of entertainment at the end of this set of four.  I’m sure I’ve mentioned his confidence at least fifty-times by now in this review – but it really is that impressive track-after-track…it’s rare to hear an emcee this ready to roll, this prepared and executing this flawlessly; but what really sets Ant Vibe apart from the rest is the ownership of his moment, his music and the words he spits.  Whether he’s lived enough life to have experienced everything he’s rhyming about…who knows, he’s a young guy still…what’s important is that as listeners, we believe every word tripping into the mic because Ant Vibe brings the realness to his performances in ways you can truly hear.  “Find Me” is another rad example of this emcee’s ability to captivate, innovate and create a cut that makes you think as much as it makes you move; I’m massively looking forward to the upcoming Vibe record – this guy is on another level entirely and I’d be willing to bet on Ant Vibe taking his career straight to the top.