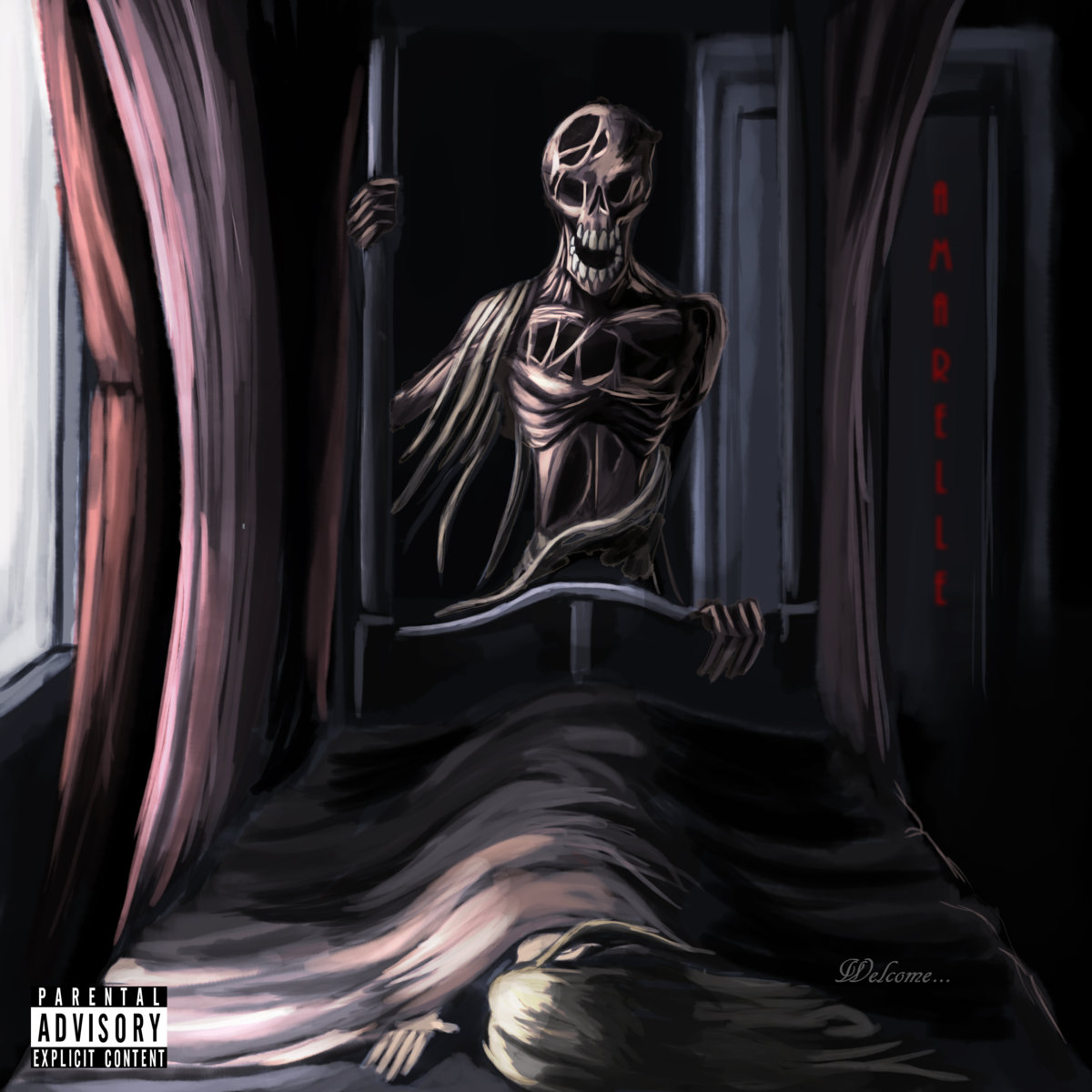 If you were to only judge Amarelle from the brutal, cutting sounds of their new-single “Never There” – you’d think there wasn’t a friendly bone in any of the bodies that make up this dynamic three-piece.  The New York-based band has just released a full-album of demo-songs – ten in total over the course of Welcome… – and I’ve had enough of a listen to at least be able to vouch for the fact that they’re not always out to kill you as hard as they are on “Never There.”

Though I don’t want you to get the wrong idea – most of the songs I heard go straight for the throat and don’t hold back whatsoever, but in the process they also revealed several different layers to their sound and noticeably different textures to their music.  So far as I understand it, Amarelle is the combination of talents added by Christyn Keenan (Vocals), Hector Medina (Vocals) and Thomas McAfee (Composer) – and to which I’d ask Hector and Christyn why they’re letting Thomas hog all the action!  Excellent guitars and the synth-lines perfectly add to the all-encompassing and claustrophobia-inducing atmosphere.

While Thomas might be musically taking the spotlight…there’s honestly no question about how much these other two are contributing the sound and songs of Amarelle.  These two gotta be damn happy with Thomas I’d say – he’s given them some truly extraordinary textures to work with on their new record.  I dig the mix and production, even in their demo-stage as they are now; the music is way up, the vocals are audible but right tightly in the mix and the whole shebang sounds MASSIVE.

In the case of “Never There,” Amarelle comes out sounding absolutely monstrous, huge and deadly at the outset of the track’s opening guitar-chops.  Kind of a blend of Rob Zombie-meets-Disturbed throughout the verse as Hector takes the lead-off before handing the mic over to more angelic sounds from Christyn.  Again – this music is HUGE…and whether they’d set the vocals like this in a final studio-mix as opposed to a demo…well…I can only hope so.  I do very much WANT to continue to here Christyn in there…and I can absolutely do that just-enough right now in the current mix.  Personally I dig it very much – I love that we can let our ears do a little digging through the dirt & grime in order to track that melody down.  Christyn’s got the goods; you might need to really get those headphones strapped on to be able to hear what I’m hearing – but there’s definitely a lot of potential there for some incredible tones and notes to soar out of her at any time.

That being said – she’s quite often competing with one of the biggest, baddest and burliest screams around from Hector.  This dude ain’t here to fuck around, let me tell ya!  You get a steady stream of in-your-faceness from the pit of his stomach on-up and he can clearly strike the match and set a track ablaze at will.  With the rasp, snarl and howl this guy has…you’d figure the band keeps him locked in a cage until it’s time to record…sounds too dangerous to let him out!

Definitely encouraging stuff from everything I’ve heard.  I don’t want to give too much away about the record itself, but I can certainly tell you that “Never There” is a solid glimpse into a ton of the aspects of this multi-layered music that make it great.  If you like the hard-stuff – there’s no question that Amarelle will satisfy the hunger of the beasts that you are.  This first single packs an enormous amount of sound and complexity throughout its five-minutes in length and does exactly what a lead-single is supposed to do – it got me stoked to hear the full record and I went right to it.  You will too.

Find out more from their official Facebook page:  https://www.facebook.com/amarelle712