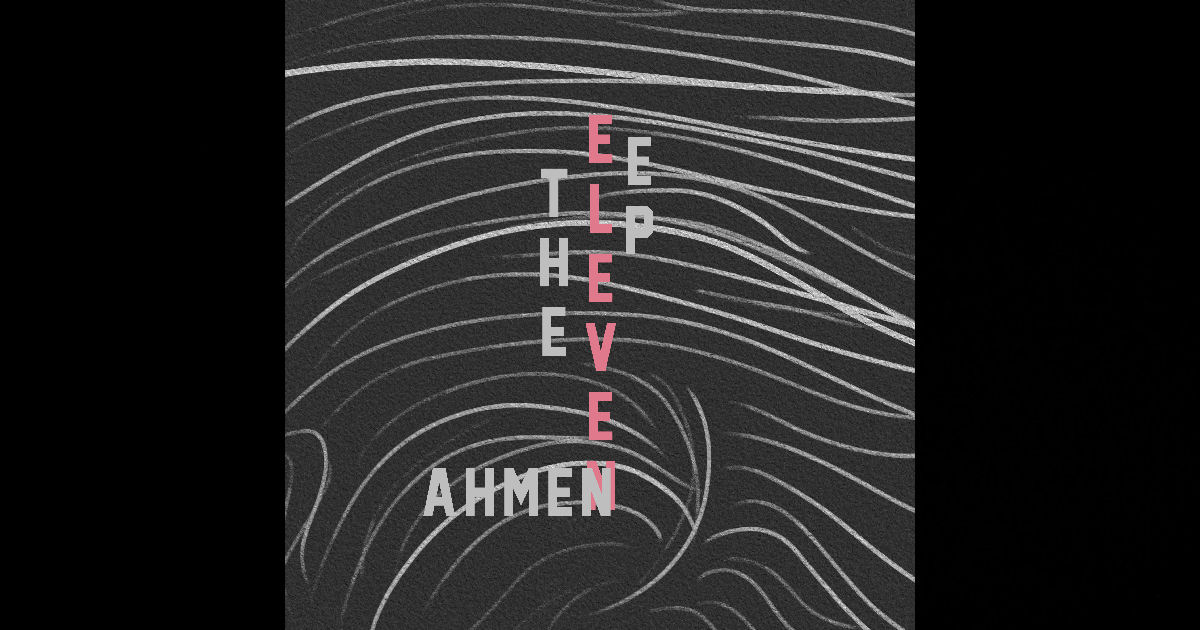 Sounds like Ahmen is ready to shake things up here in 2018!  It was pretty obvious to me that it wouldn’t take long for this inspired emcee to return after listening to his last record Timeout from 2017…I mean, you just can’t sit around and let talent like this go to waste, you know what I’m saying?  If I had half the skills Ahmen had I’d be making a lot more music as opposed to just writing about it, dude’s one of the most confident & professional entertainers you’ll find in the independent Hip-Hop scene.

And believe me when I say…he’s back & sounding bolder than ever on the five new cuts on The Eleven.

Put it to you this way…I was a fan of Timeout, I really thought that was a great record and had a whole bunch of excellent cuts – but as IF Ahmen hasn’t busted out what’s probably one of the most single-worthy tunes I’ve heard from him personally or the entire year of 2018 right out of the gate with “Glare.”  This.  THIS!  This is a freakin’ masterpiece, rooted in the classic Hip-Hop sound, almost with a tint of a hypnotic/psychedelic vibe in the atmosphere like you’d find in Cypress Hill back in the day, but with an ill beat that brings brighter aspects of the sound to the surface like ol’ Kool Moe Dee or Maestro Fresh Wes.  These are a couple of examples in a list that could go on – but I’ll be damned if I can think of anyone out there working this style as successfully as Ahmen is on “Glare” right in the here & now.  For real – if you’re a true fan of the genre…if you know the music from the modern day all the way back to the real roots…then you can hear Ahmen is building on those blocks made available by those that paved the road before him.  But that’s the important thing in this whole scenario – he ain’t just retreading old terrain…he’s stomping forward confidently and bringing the standards of this entire genre up several levels, audibly keeping the pressure on the rest of the emcees out there to step their game up if they wanna somehow compete.  There is, to say the least, enough style & skill on this one track alone to make a whole bunch of rappers realize they should probably retire, and by that same token, inspire a completely different generation to really bring it if they wanna step to the m-i-c.  Ahmen sounds like the battle rapper he purports to be in the lyrics of “Glare” – ready to slay any other emcees on his way to the top through sheer quality & commitment…you just can’t match this dude’s passion for rappin.’

This guy has such fantastic energy when he pours it on.  Honestly, I’m almost just as impressed with what he’s doing in the background of “Define My Path” as I am with what he’s got goin’ on with the lead parts.  And truthfully, while I might argue that “Glare” has a serious shot at making a massive impact out there in the Hip-Hop scene, the crossover potential he’s got with “Define My Path” likely makes this the most accessible track on his new EP by a large margin.  I ain’t gonna lie to ya…I’ve heard all five tracks plenty by this point and Ahmen is spoiled for choice as to what he could release as a single when it comes to this record – but there’s a good chance that the mix of styles he’s working with on “Define My Path” and the positivity laced into its theme are going to be the song that connects the quickest with the masses out there.  He laces the verses with wild doses of charisma & character, allowing the playful side of his rhythm & flow come to the surface while spittin’ out some of my favorite lyrics on his new EP.  Y’all know me…I’m big on artists putting themselves right into their music, and that’s definitely what Ahmen is doing here…”Define My Path” is pretty much his own anthem from what I can tell.  What becomes impressive on this tune & some of the others that go the more personal route on The Eleven, is that he’s able to take these personal insights and make them adapt on a universal level we can all reach.  Designed to encourage and inspire through this tale of finding his way in life, “Define My Path” kills in the verse & crushes in the chorus – everything about this cut is engineered to switch your light bulb on.

“Release” is an audible definition of the expression & feeling it implies – Ahmen’s gettin’ some important stuff off his chest here…and I’d imagine the words he’s written into this tune will be ones that many people out there listening will be able to relate to.  A track like this can serve as catharsis for us all on some level…but understand the difference between most of the people out there and Ahmen, is the fact that he’s not just subscribed to the ideology driving his words on “Release,” he’s put it all into action and created a powerful song that really allows him to get across a lot of what’s on his mind.  Essentially, he’s releasing himself on “Release,” and providing an audible blueprint & design for what it takes to escape once you get to that point yourself, which you very well might one day.  The star of the show turns up the heat & intensity here, hitting highlights for his speed & flow as he rips through the bars of “Release” with remarkable skill.  What I always dig about Ahmen’s music is that, no matter how fast the dude ends up rapping, he’s always got time to make his words have the right energy & style to match the ambition & meaning in his words – and ultimately that comes down to smart songwriting.  His metering is impeccable…there’s no awkward phrasing or stretched-out syllables tripping him up – he’s got just the right amount of everything he needs to spit with full confidence and know that he’s right on-point with what he says and how he says it.  I got a lot of respect for that.  All day long I hear an occasional word or two from an emcee out there that sounds unsure, or packed in too many words to make something work…you never get that from Ahmen – this dude has a tight grip on the mic and knows his way around the bars, no doubt about it.  Amazing pace on this cut…whether he’s ripping it up at full speed or pivoting & shifting through different tempos, Ahmen mesmerizes on this third cut.

“I got the mic…I got the might.”  Preach the good word homie.  If you had ANY doubts about the skills of Ahmen (and like, if you still do at this point somehow, what the hell is wrong with you?) – he’ll silence anyone on the fence with his speed & skillful flow on “I Got The Might.”  I mean…he pretty much packs more words into the first twenty-three seconds of this song than you’d find on the average Rock ALBUM.  Again, what’s continually impressive is just how much TIME Ahmen has, even when he’s at his maximum speed – he’s a serious master of delivery and there’s not a thing he can do to hide it from us.  He straight-up sounds like an emcee possessed when he’s blazing through the bars of “I Got The Might” – and when he pumps the brakes for a moment or two, the effect of the momentum slowing down draws us right in.  He’s got several cuts that dig deep into social commentary for a moment or two – some of the best bars you’ll find as far as political statements are concerned exist on “I Got The Might.”  Shortest cut on the record, but large on personality – you get a full dose of what Ahmen’s got on his mind through this track, raging back & forth through thought-provoking words, creative imagery & pop-culture references, all wrapped up inside a track that has incredible balance through its intensity & slick coolness running sleekly through the atmosphere.  Highly inventive beat on “I Got The Might” – it’s got a real mysterious sound to it…nearly straight-up creepy at times, but absolutely wild to listen to, full of texture and magnificent low-end swells, tight beats thumpin, hi-hats clickin…I think you gotta hand a lot of credit to Ahmen for turning this track into what it is.  Were you to hear “I Got The Might” as a regular Joe in instrumental form – it’d make your head spin to think it ends up as it does…but like all-things-Ahmen – he’s found a way to maximize the potential and capitalize on every single second of this cut.

So…he began with what I’d consider one of the most single-worthy tunes of the year – and he’s closed this tight experience with an absolutely mind-blowing highlight in Hip-Hop 2018 with “Numerology.”  Ahmen goes on to pack incredible sincerity, hunger, determination, and focus on this final track – while I can understand it’s a lot less likely that this particular track would become a single through the heavy vibe & musical weight it carries – I do think the performance is straight-up off the charts perfection & that people will turn this track way the fuck up every chance they get to do it.  Some of my favorite lyrics exist on this tune…I love that Ahmen’s taking time to acknowledge his own journey & evolution, but at the same time, explain how what he’s been going through, actually applies to us all in many ways.  That he’s been unafraid to speak up when it’s most important & ready to lead by example…he’s aware of his platform and in my best estimation he makes every opportunity to use it responsibly in effort to assist us all collectively…it’s an admirable quest.  With the amount of detail he puts into his thoughts & rhymes – it’s the kind of tale that people out there can truly learn from while they’re listening without feeling like they’re being talked-down to.  It’s completely obvious that Ahmen is on the side of the people – tracks like “Numerology” reveal the human-side of him just a bit more than the rest, taking that introspective trip to dig into the personal, which effectively allows us all to experience what he’s rapping about as if we were experiencing it all ourselves…and maybe some of us are.  He’s really got an incredible gift for reaching deep into his own thoughts & feelings to come up with experiences that powerfully resonate inside us all…people will connect to this EP, I have no doubt about it.  Depending on what you love, you might have your favorites like any given listener tends to over time & listening – but to me, if you’ve got your head on straight…it should be tracks that run as deep as “Numerology” that you should be seeking out & craving daily.  I get up every day of my life hoping I’ll find something that sounds THIS REAL in it; I dig that Ahmen’s kind of put a looser flow into the majority of this cut, or at the very least, the first half…it gives that freestyle thoughts-right-off-the-top-of-his-dome feeling to the vibe.  Plus it really serves that second-half of the song, where Ahmen adds that inspired energy & magic as he tightens the flow and flexes that professional skill he’s become synonymous with.  Spectacular ending – Ahmen is clearly at the top of his game right now, there’s simply no denying it after listening to The Eleven EP.

Find out more about Ahmen at his official page at Facebook:  https://www.facebook.com/iamahmen