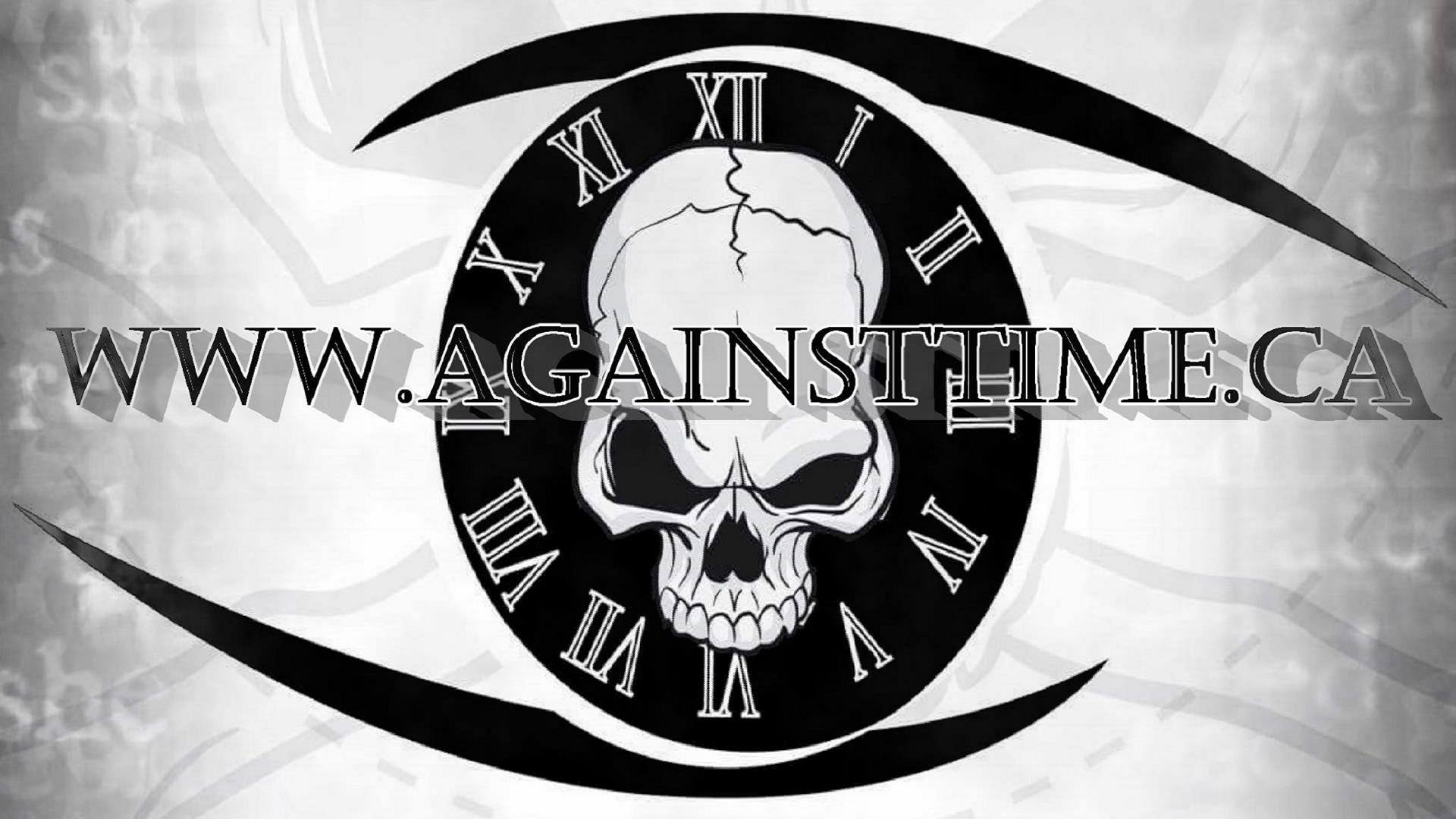 After all, it IS Canada Day…suppose I should post a review about something out there in the ol’ Canadian music-scene…seeing that Ottawa-based heavy-rock band Against Time was on my list of stuff to check out made it a natural choice to be today’s celebratory review.  They’ve got three brand-new reasons to FEEL like celebrating – the effort put into the writing, performance and production of this EP was noticeable; it all came out sounding killer and also notably improved upon the last time we heard the band back in 2015 reviewing their last set of gnarled-rock tunes on their self-titled EP.  And there you have it in a nutshell, the music on their new Slow Burn EP got me amped & excited about the direction of this band, but also really fit that special je ne sais quoi…the, shall we say, solid representation of Canadian-values I was looking for to post up on our country’s 150th birthday.

Against Time isn’t JUST Canadian – they’re Canadian AF and I’ll prove that to you – check this out from their website direct:  “British Columbia, Ontario, Quebec, and New Brunswick are all represented with members who proudly consider themselves French, English, or Acadian but all Canadians.”  So geographically-speaking, this band is about as Canadian as Canadian can get…yet they continue to prove it further in the write-up from their homepage:  “Walk into this jam room and you’ll find conversations flowing in English and French simultaneously. Membership in this band requires the ability to swear in both official languages.”  You see what I’m saying?  Rad.  Happy Canada Day everyone!

The new EP from Against Time starts with their lead-single, “Tomorrow’s Son.”  I’ll say this straight-off the bat – after listening to these three songs multiple times, I think they could have potentially argued for hours and hours about which track to release as the single to pull people into the new record – all three tunes could easily be put out there for multiple reasons.  Things are going really right for these five rock beasts of Against Time this time around…in my opinion, they’re sounding a lot like the band Cold on their new EP – which is plenty cool with me, I love that band.  You get a taste of that atmosphere in the lead-single “Tomorrow’s Son,” but those similarities will become even stronger as the EP plays on.  Lots of room out there for a sound like this right now…Mike’s kicking ass on the vocals throughout this record as well, which is cool because I kicked his tires a bunch the last time I heard this band.  No complaints from me this time around, he’s killin’ it and sounding impressive throughout all three songs.  I might have repeated the approach on the first two repetitions in the pre-chorus’ chant of ‘breaking down’ on the final two repetitions as well, if that makes any sense.  The hook in the first two runs is really strong, after that I think it’s probably a bit noticeably jagged with the melody, but overall, that’s a seriously minor observation & suggestion to consider – nothing I’m complaining about.  It was also the only moment in the three songs that made me raise an eyebrow and question the decision/direction of how he went about singing one of his parts – again, in comparison to last time around, I think Mike deserves a hero’s award for most improved.  He’s really found a way to fit the sound of these new songs with a majestic rage that really works just as well in the quieter moments as it does when the band fully explodes.  As it’s written, “Tomorrow’s Son” holds up with Mike putting a unique spin into that moment before they launch into the full-on chorus.  Big guitars from Yan & Al…these guys can seriously let it rip when the rhythm section between Bern on the bass & Elder on the drums start picking up the pace.  The solo around the 3:30 mark is wickedly intense and massively well-played…it heightens the madness and sends us happily fuckin’ stoked to listen to the final burst of rock-meets-melody in the chorus before the song is over.  It’s a solid & gripping start…but for me personally, I felt like this EP had even more to offer still to follow after I heard the other two cuts, which really isn’t a bad problem for a band to have, you feel me?

It HAPPENED.  I mean it…seriously…sometimes you hear a song like the middle tune on this EP called “Signs” and you hear the music like it’s for the very first time all over again…or like you’d never REALLY heard it at all before, even though you’d swear you’ve been listening.  “Signs” seemed to sound like the band I’ve been secretly hoping they’d morph into being…taking on that signature heavy-grind in their music and really amplifying the melody-aspect in their writing…this song…really, really works for them.  Seriously jazzed about this cut – LISTEN to the endless work that Bern puts into the bass!  Guitars come in shredding and grinding perfectly into “Signs” while Mike delivers one of the most powerful and well-written parts I’ve heard from this band in the vocal department to-date.  In the chorus, Against Time becomes absolutely MASSIVE and Mike lets those vocals perfectly soar with authority and confidence in a highlight performance that really showcases the evolution in this band’s sound and their writing.  More than any other, “Signs” really brought me back to those moments of seeing Cold live for the first time and the insane amount of power they put into the dynamics of their stuff…”Signs” has all that raw, intense energy & then-some.  The hooks on this cut’s chorus are 100% inescapable – you gotta respect killer ideas in the writing, all-out performances and stunning execution like this when you hear it.

The haunting opening in the music of “Left Behind” matches the theme of the lyrics insightfully well…and as a result, Against Time ends the Slow Burn EP with another intensely well-realized and complete idea.  Brilliantly switching up the tempo throughout the song, they transition professionally between the light & dark, slipping in & out of the shadows and bone-crunching riffs.  I liked how “Left Behind” used its different energies and bolsters its menacing sound even further through the chorus with another set of extremely solid hooks.  The backing-vocals/effects around the four-minute mark have this band sounding like a verifiable sonic-force, leading Against Time to end the EP on another one of their strongest ideas, songs and performances that we’ve experienced so far.  The clarity in the instrumentation & mix is so bang-on throughout this EP, even at the grittiest, crunchiest and most distorted moments of the guitars, the band is sounding CRISP and more into it than ever before.  It really felt like they made the most of every possible opportunity on the Slow Burn EP and ventured out even further upon the path they’ve set out on with real evolution, growth and depth surfacing in the music like never before…definitely a sound that’s completely on its way to right where they want it to be.

Well done gentlemen…you’ve given me that sweet, sweet sense of nationalistic-pride-stuff on the one day of the year we’re most supposed to have it through the notable improvements in the music you make and a record to really be proud of.