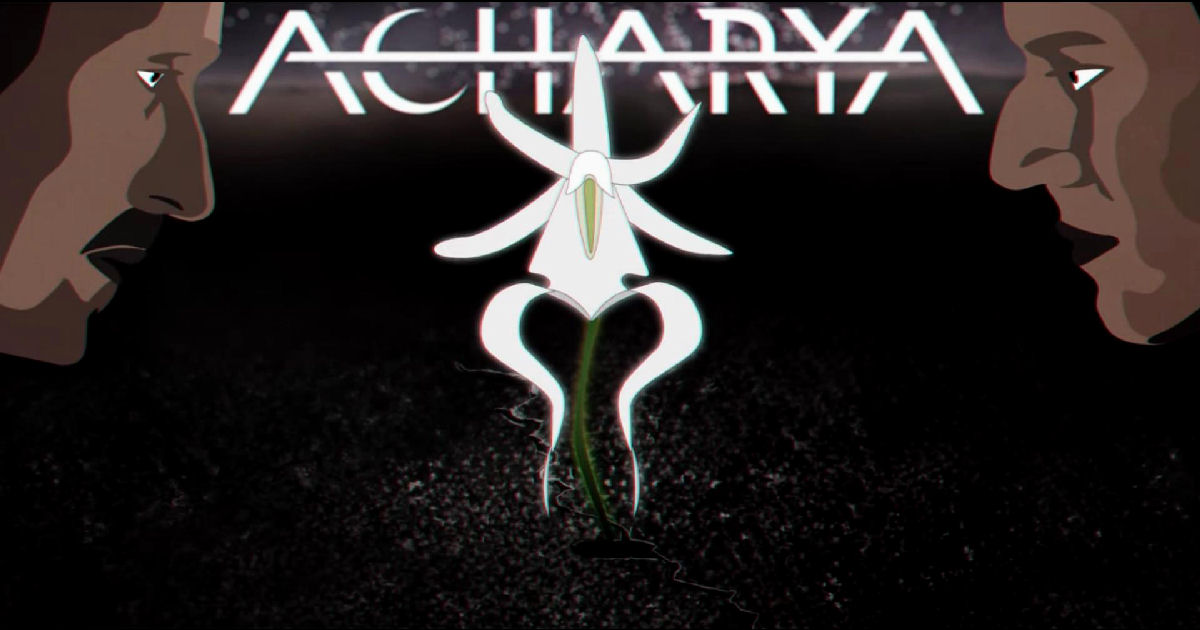 Back in September 2018, I had my first opportunity to check out what Acharya was up to.

And I knew then what I still know now.

Without question, I knew I was listening to something with that intangible uniqueness I’m always hoping to find every single day when I get out of bed…it was a single called “Tilt.”  Loved the playing, loved the sound, loved the potential that seemed to exist in the energy & aura of this band perhaps even more – there was something undeniably special starting in between this duo out of Northern California.  Even if I couldn’t exactly put my finger on what that was at the time, they had me listening from that moment.

Watching things evolve in a band, project, or artist’s work from such a distance away over the internet is one of the greatest privileges I’ve ever known in doing this whole music-review website-thing we do.  Acharya would go on to make pivotal moves ever since the release of that single “Tilt,” which became the centerpiece to their EP of the same name, which I reviewed to great acclaim in November 2018.  We’d go on to spin several tunes on the SBS Podcast and feature Acharya for the people out there, I did my best to rant & rave about’em while I could see other critics & fans out there starting to do the same – one way or the other, word spread to the point where it at least became clear that this crew was making music that the people out there wanted to hear.  So they kept on going.  They kept on pushing themselves to that next-level artistically & creatively – and as a result, the band continued to log new breakthroughs & milestones.  At the end of the year, they secured a nomination in our annual top-ten list of the essentials from the year of independent music-awesomeness, and quickly into the next, they expanded the band to include Rachel Wagner on vocals, piano, & keys as a full-time member of Acharya.  For those of you out there following this band like I have been, you’ll certainly recall her from the first impression she made on the Tilt EP when she stepped into the spotlight to play & sing on the song “Stand” – there was an instantly audible magic between them…I’m sincerely glad they’re now keeping that going and have invited her into the fold alongside the incredible talents of Josh Grayem (Guitars, Vocals, Programming) and Daniel Blackburn (Drums, Vocals).

So you see…they’ve got all this cool stuff going on, growing support all the time, and yet – they’re STILL doing more to keep the momentum & music flowing.  We follow the band from the studio page on Twitter (Of course!  Don’t you?) and they’ve been putting out these like…kickass minute-long clips on the internet that will give you MASSIVE insight into what’s happening with the band essentially in real time.  I mean, you know, editing & puttin’ Acharya stamps takes a minute or two…but you get the idea – they’ve got something fresh for you, all the time.  A snapshot view into a truly beautiful machine.

The point of this entire story is to outline how every move they’ve made since I first even heard about them concretely proves that there’s more heart, desire, work-ethic, and forward-thinking in Acharya than you’ll find in most bands out there by a clear country-mile.  They show you, week after week, what dedication to the art & a genuine love of the craft truly looks & sounds like…& now here we are again…

BE-FREAKIN-HOLD DEAR READERS, DEAR FRIENDS…WE HUMBLY (IN ALL-CAPS) PRESENT TO YOU (BELOW), ACHARYA’S NEW SINGLE/VIDEO FOR “SPEARHEAD” FROM THEIR TILT EP.  ENJOY!

Do you see what I’m saying?  Do you hear what I’ve been ranting about?  I ain’t gonna lie to ya – I wouldn’t have expected them to have chosen “Spearhead” as a single!  But then when I see what the song has brought out visually onscreen…I mean…this is next-level y’all and completely solid entertainment.  What an excellent complement to a highly artistically designed song to begin with – the video assembled by Millennium Deathcult is extremely cool stuff to watch!  From their animated faces to the incredible visuals, gorgeously distorted imagery, and wild effects that flow throughout “Spearhead” to the expert way it transitions and moves onscreen – I almost don’t even know what to say other than this is what it looks like when you put in the work, time, and effort to get it RIGHT.  Like the timing is just superb, straight-up…watch moments like around the 2:15-ish mark where the clearest glimpses of the faces of Acharya become revealed for ya and how Millennium Deathcult has got’em movin’ onscreen.  In seeing the end results, I honestly don’t think I could possibly be prouder of how hard I know this band has worked to get traction out there & how much it’s clearly all coming together for them.  The entire universe will get out of your way when you’re truly on the path you’re meant to be on…and the way I see Acharya overcoming the obstacles and bring their own style, sound, and artistic integrity to the scene…honestly, it’s powerfully inspiring, no matter how subtle their tunes may be.

Giant thumbs-up & nod of full approval to “Spearhead” – both the spectacular new video, and of course, the song itself.  You can read my full thoughts on Acharya’s Tilt EP with my original thoughts on the song by clicking right here…and that’s cool, you SHOULD do that…but first, make sure you’ve treated yourself like the King/Queen you are & take-in an awesome audio/visual experience by clicking on “Spearhead” up above.  Show Acharya some love in congratulating them for a job incredibly well done on this video with Millennium Deathcult at the helm – “Spearhead” is another completely solid step in the right direction for their music & career and a combination between video/song that deserves to be noticed.

I knew then what I still know now – these guys have everything it takes to succeed.

Listen to more music from Acharya at their page at Bandcamp here:  https://acharyaband.bandcamp.com