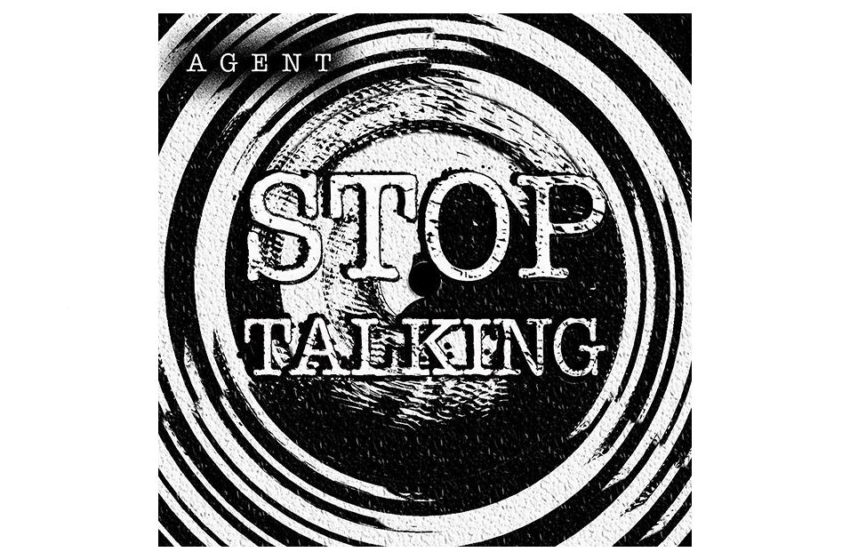 “You smoked too much and you’re insane.”

That’s accurate I suppose, but I swear I wasn’t always this way.

Alright…chances are the new single A G E N T isn’t about my life story.  In fact, I know that’s not the case definitively, because I’ve already read the official press release on “STOP TALKING” (below) and learned that this track is based around an argument between a couple friends that…well…obviously it got a little outta hand.  Plus if you tuned into the recent episode of the SBS Podcast, you already heard me talking about all this before we played “STOP TALKING” on the show…no sense in pretending, it’s not about me, no matter how much that line I pulled from the song above probably applies to the braincells I got left.

So let’s see here…what can I tell ya about A G E N T’s new single culled from the 2018 debut record SUMMON THE JUICES?  As I mentioned on the recent show – this single will probably surprise you a whole lot more than you think.  I mean, if you’re into Punk, great, you’ll be along for the ride from moment one on this tune – but if for some weird reason you weren’t into Punk, and you stumbled onto “STOP TALKING” – I’d be willing to bet that if you hang out for a while and listen, you might end up really liking what you’ll find.  A G E N T is going to come atcha full-speed through the first-minute of this…I’m not gonna lie to the non-punkers and say it would be easy for them to get to that second-half – but the inventive transition & transformation in this song will lead “STOP TALKING” to another place altogether.

What I definitely dig about this single is the riotous energy that the Punk genre is synonymous with, is owned with confidence by A G E N T.  Drums, bass, guitar, vocals for that first minute – meat & potatoes, the essential, basic, and bare bones ingredients…aka, all great Punk Rock every really needs; A G E N T surges and powers through the opening sixty-seconds of “STOP TALKING” like the man is playing this song as quickly as possible, because the house he’s playing in currently burning to the ground, but you know, he wanted to get that one last song recorded before hitting the fire escape to get out.  Through his own recording methods & DIY approach, A G E N T has done a noteworthy job in creating that gritty texture to the writing & sound of the beginning of “STOP TALKING,” taking the tempo for a serious rip and pounding out a solid sixty-seconds of furious instrumentation and non-stop Punk-inspired music.  Fans of the genre…they’re gonna love the beginning for sure – there’s no reason not to; “STOP TALKING” has all that intensity you want and that mix of electricity, mayhem, and raw energy in the atmosphere that has made Punk strong enough to withstand the test of time and always be a relevant style of music.

As you’ll read below in the official press release from A G E N T, multiple sounds, styles, and ideas come into play throughout the SUMMON THE JUICES record – and you’ll get a nod towards that throughout the final ninety-plus seconds of “STOP TALKING” with the massive shift that this single will take in its direction.  Like I said at the beginning…the Punk music crowd, they’re already cool – they’ve survived the wild first minute of this cut and they’ll be stoked for whatever comes at’em next, they’re an open-minded & excitable bunch.  As for the rest of you out there, you’ll get something completely different from the beginning in the second stages of “STOP TALKING.”  It’ll retain the Punk attitude in the lyricism – but the music…dare I say, it almost goes in a uniquely ARTISTIC direction!  Ain’t that a true case of ‘yeah but, can your Punk do THIS?’  A G E N T mellows right the hell out here and drifts into a really rad, hazy, atmospheric switch in sound that will take over from this point in the song to the end, almost as if it echoes the bitter feud and argument in such a haunting way that it’s like you know the incident is going to hang in the air around them from now on…you can feel that from the way this song ends up moving into what’s almost a mix of sorrow, regret, realization, and ultimately I suppose, acceptance.  The ultimate conclusion of “STOP TALKING” comes within its final seconds…which may/may-not be an authentic voicemail from the incident that inspired this tune, it’s hard to say 100% – but the least we can do is probably assume it’s based on it, if not the real thing itself.  Either way, the words are just about as harsh, direct, bitter and brutal as words can be:  “You made a mistake.  You are a mistake.”

I dig it though…I think it was a good move to switch up the sound as much as A G E N T did on this tune, to flex more than the one gear and reveal there’s more to this project than merely Punk barn-burners.  “STOP TALKING” has the kind of versatility that opens doors; I’ve got all the time in the world for Punk music personally, but I’ll certainly make more time for atmospherically-inclined ideas like you’ll find in the sound of the second-half of this cut…bottom line is, there’s a good chance you’ll dig at least one-half if not both-halves yourself!  PLUS – there’s a rad video that comes along with it that basically lampoons the ol’ VJ (that’s short for Video Jockey kiddies) scene from back in the MTV era…before reality TV took all the music over.  Sometimes they’d have these short breaks with a host letting you in on what’s goin’ down in the music-scene…that’s what this video reminded me of.  Is that A G E N T himself in the video, in the apartment or dancing it up at the front of the crowd – you bet your ass it is.  You can also find a whole behind the scenes vid that’ll show you A G E N T in action at his studio, ripping it up & recording “STOP TALKING” right there in front of ya like you’re in the room too…so if you’re digging this & you wanna find out more about what-all went into it, be sure to check that out too!

We’re featuring “STOP TALKING” by A G E N T on all our channels out there & you can find out more of my thoughts on this band in the latest episode of SBS Live This Week as well, I spilled a few more thoughts on what’s goin’ down with this NorCal sound.  Make sure to check that out, along with the SBS Podcast featuring “STOP TALKING” as well…and you’ll have a good idea of what A G E N T is all about after all that faithful research, reading, and listening!  Hear the music & find out more by following the official links below and having a read of the official press release direct from A G E N T!

Expect the unexpected from A G E N T. Fueled by catchy, melodic highs and lows with raw emotion live on stage and in the sound. Motivation and angst are in a constant battle with this punk artist from NorCal.

STOP TALKING (latest single) is based off a true, personal story of a friend who started an argument and went too far. The song captures the frenzy of thoughts and later soothes down into the reality of a bitter end.

A G E N T is indie, underground, under the influence of all types of music, especially rock, punk and metal.

Most recent, A G E N T released his debut album, SUMMON THE JUICES in July, 2018– taking about a year to make, all made in a DIY studio and personal drama attached with it all. The album is a throwback feel of punk, rock-n-roll, a dash of surf, metal, including a ballad and a choir for another. The album art is A G E N T bloody guitar, FALKOR, from a live performance mishap.…Ouch!