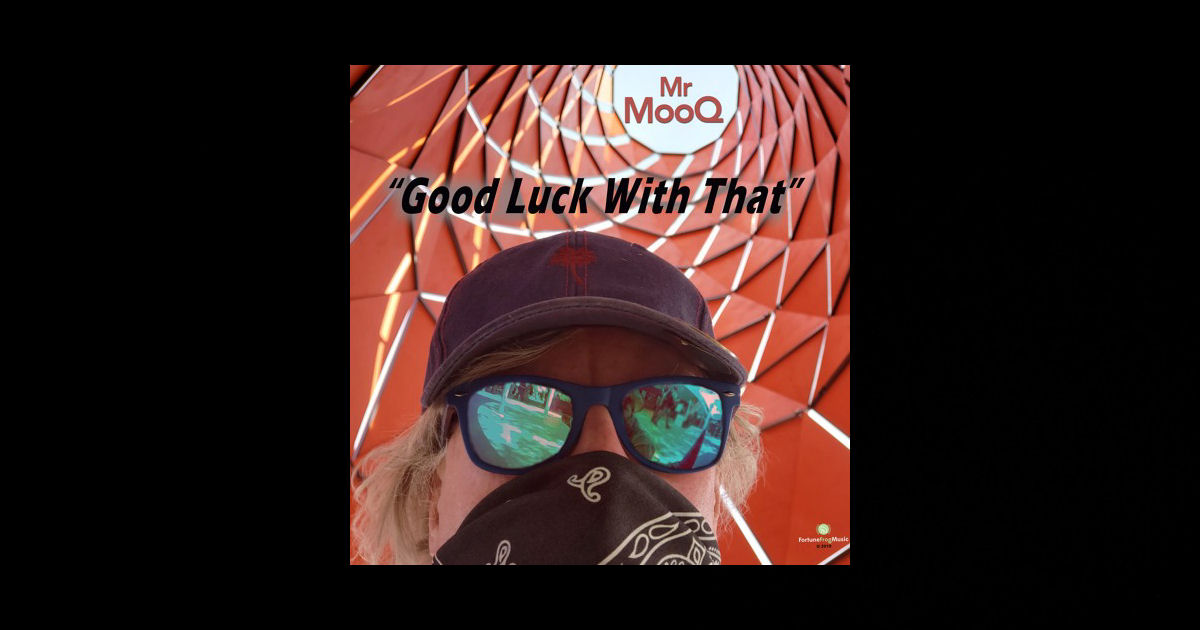 Here’s one of the more quirky characters from out there in the music-scene.

Perhaps you remember the man…Mr MooQ has had his music featured here in reviews from around the summer of last year when we checked out singles like “Double Happiness,” “Dreaming In Color,” and his wildly upbeat & mechanical collaboration with The New Occupants on “Be Careful What You Listen To.”  I learned we could always count on Mr MooQ for vibrant sounds and catchy melodies…beyond that, he keeps us guessing as to which way he’ll twist his electro-infused grooves next; there are always high doses of character & personality on display throughout this dude’s tunes too I suppose, but you still wouldn’t have a clue as to how they’ll come to the surface of your speakers the next time you hear him.  So cheers to that…it’s creative-types exactly like Mr MooQ that make our world turn around here at SBS.

All that being said, this friendly artist is playing the role of the savagely jilted lover on this new single – in many ways, especially on a lyrical-level, sure sounds like things aren’t so great at the moment in the land of Mr MooQ and the ol’ music here has become a therapeutic tool for catharsis, closure, and the healing he needs.  Sometimes you just gotta write a tune to vent out your feelings, emotions, and frustrations – we could cite examples of artists like Taylor Swift or Alanis Morissette & the scores of others that have found success in turning their own personal tragedies & breakups into art & music – it’s no secret that this whole songwriting process can alleviate the pain…in some cases, alleviate the pressure on the ol’ bank account too.  Love itself is relatable, sure – we all get that on some level – but just as easily as we understand what it’s like to have it, almost every single one of us know what it’s like to lose it as well; as the emotional-beings we are, we’re quite unified in the shared pain and experiences of all-things-love.  In listening to the words of a song like “Good Luck With That” you certainly get where Mr MooQ is coming from…in fact, chances are, many of you will have felt this way towards one of your own past relationships that ended all too quickly.  On a psychological-level…if you want to pull up the stages of grief chart and follow along, you’ll see that Mr MooQ is probably still somewhere in the angry phase here…despite how catchy this song is, the mere making of it suggests he’s likely still hurtin’ big-time on some level, which comes out in the dripping sarcasm you’ll hear in the chorus hook of “Good Luck With That.”  Smart line though and a great hook to have built this song around – yes it sounds great, but again, it’s also a statement that I’d be willing to bet a ton of people have echoed in their mind at some point in time during a breakup or post-breakup scenario…sometimes you just want to say to someone that you feel should absolutely know better & know what they’re losing, “Good Luck With That” – and find a way to move right on somehow.  Ain’t always easy, as Mr MooQ will detail for ya here in the words of this song…but you can also infer from the fact that he’s singing it for ya now, that he IS finding his way through the pain to come out shining on the other side – and you gotta dig that people, c’mon.

Musically-speaking, there’s lots of sparkling sound and big piano-chords leading the way in the melody for your ears to absorb…I’ll admit, almost a strange level of uplifting sound in the music for the heaviness you’ll find in the lyrics…but perhaps that’s the point as well.  Once you’ve said “Good Luck With That,” either in your mind, or in person, it’s time to get steppin’ and movin’ on – and maybe that’s the extra level of symbolism you get in between the contrast of the lyrical content and overall sound.  If it’s not…and I’m over-thinkin’ all this somehow after being up all night as usual…then…well then it’d be kind of a strange combination between those two aspects of lyrics & music that I’m not sure would work as well for me.  Lyrically, I dig the words Mr MooQ has written, I’m not at all in-love with the flow of the vocal-melody, but I do think that it suits the vibe for what he’s looking to create with this song.  Sometimes a choppy cadence can have an appeal…and perhaps it will for other listeners out there; for me, it sounded like you could take a tape-measure in between each syllable and find each space between the words equidistant apart to the point where you feel the craft as opposed to the organic design you might end up craving.  It’s a tough one…because on the one hand you have to acknowledge the skill of the design that it actually does have, it’s just one that shows the songwriting-aspect in plain view as opposed to having that natural feel…which hey, might maybe just be a stranger fit anyway in Mr MooQ’s digital world, who knows?  I think what probably concerns me more is that this particular single sounds a little bit like Adam Sandler doin’ The Sandman voice & fronting a band like Dead Or Alive or Maroon 5…which makes it even harder to take the seriousness of the emotion in the lyrics, which we’re already battling to get to the heart of through the endlessly upbeat vibes in the sound surrounding’em!

Anyhow.  That’s my take on it – you’ll have your own I’m sure and “Good Luck With That” if ya know what I mean.  You do you, I’ll do me, and we’ll continue to get along just fine for years & years to come.  Mr MooQ might be rockin’ a strange balance in between his worlds of thought & sound on this single, but at the end of the day, I’d never deny the main hook and how strong it really is when it comes to “Good Luck With That” – I think anyone wrestling over whether they do or don’t love what this dude has come up with this time will likely fall on his side of the fence based on the strength of the chorus alone.  Overall, it’s still a lot of fun to listen to despite the downtrodden words & lyrical imagery…and I think the empowering feeling that comes along with the expressive way Mr MooQ sings “Good Luck With That” gives it just enough of a positive spin that we don’t completely drown in the sorrows of an oddly upbeat tune.  He’s on the rebound & finding his feet again…songs like this, are part of that healing process.

Find out more about Mr MooQ at his official homepage at:  https://www.mrmooq.com