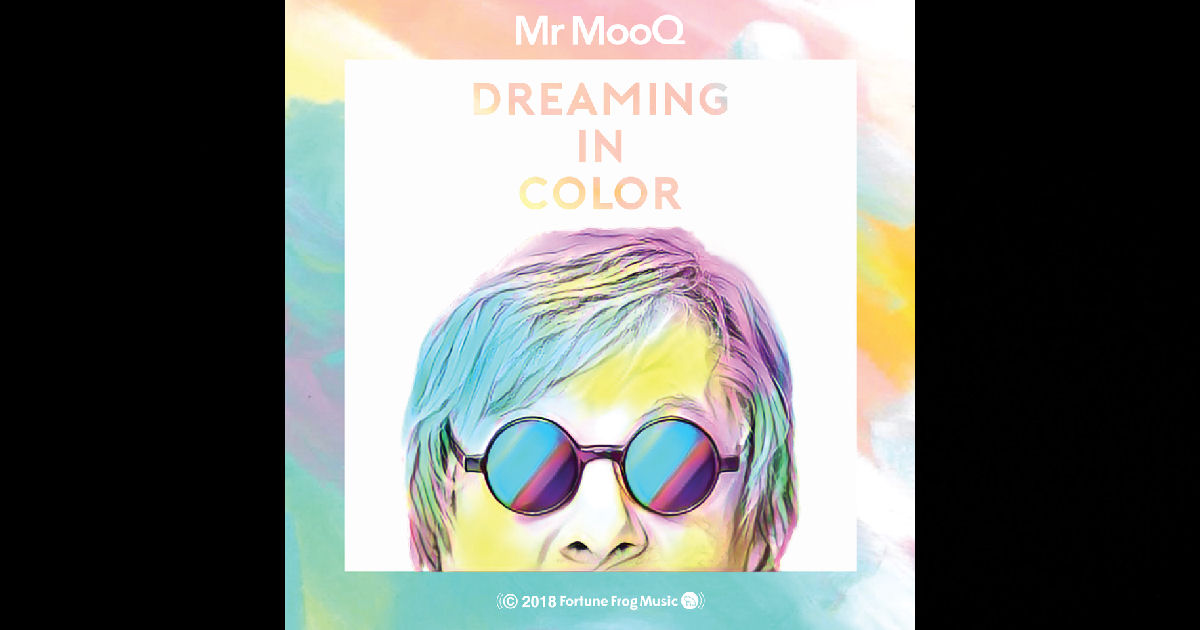 It was just back in May that we first got turned on to the music of Mr MooQ through his single “Double Happiness” – and then it really wasn’t all that long after that he was a featured guest on the single “Be Careful What You Listen To” by The New Occupants…safe to say the man is having a decent 2018 so far!  Back again with the most chill vibe we’ve heard from him so far, the new single “Dreaming In Color” pretty much confirms that you never really know what to expect from Mr MooQ in sound or style – but it’s fair to say no matter what he comes up with, there’s several reasons to listen & enjoy.

For instance…it’d be hard to deny the invitational sound that “Dreaming In Color” presents right from the drop as it begins…believe me when I say, it’s not going to get any less friendly than it starts.  The bouncy mellow synth sounds in the atmosphere give this rubbery feel to the texture of the music…in a good way…like a pulse of sorts that moves with you, or that you can easily follow along with.  As Mr MooQ begins to sing, the dreamy vibe of this melody becomes even more pronounced…almost like a synth-pop Peter Gabriel in his tone at times.  There’s that slight gruff or rasp that’s just audible enough to hear…a signature part of his vocals that has a lot of charm & appeal.  Overall, regardless of who you may/may-not compare the sound of his voice to, you gotta admire the sheer SOUND of it, do you not?  I think the production aspect when it comes to the vocals is outstanding on this tune; for the most part, it sounds incredibly natural and fueled mainly by the organic talent & tone that Mr MooQ brings to the mic – but if you listen in close, you can hear the tiny enhancements made whether through harmonies, layers, or effects, that take the sound from good to great.  I will also say this with conclusive conviction – he’s got one run-through of the chorus that absolutely stands out more than any of the others due to one tiny change he makes in the way he sings it.  I’ll fully admit, there’s a good chance that it stands out because of that minor change around the 3:30 mark, simply because it is different from the others just slightly in its variation – but…BUT…I like to think you notice it because that small change to the melody there creates pure magic.  When it comes to the verses of “Dreaming In Color,” I’d say it’s safe to say I’m a big fan of the way Mr MooQ approaches this tune – you can really hear him spring-off the synth-beat and his energy-level is spot-on for a perfect, complementary match to the bounce you find in the music.

Now…as far as that chorus goes…I mentioned that change towards the end being a key element – for me it was…another reason to dig this tune and a solid reason to return to it, as small as this moment truly is, I noticed it every single time.  When it comes to the majority of the runs through the chorus of this song, there’s definitely no hiccups or discernible flaws in Mr MooQ’s performance – but with that being said, he might be pushing the limits of people’s sweet tooth out there.  No mistaking “Dreaming In Color” for anything other than what it really is, which is a love song, but like, to the nth-degree.  Throughout the verses, he flexes some decent imagery and lyricism…in the chorus, I felt like he kind of dialed back the craft a bit in favor of more straight-ahead & direct expressions…it adheres to the theme overall, but definitely isn’t seeking to challenge you in this department so much as offer you something easy to digest.  And…I dunno…I suppose I have a tougher time accepting that…I had moments where I’d listen & feel like the words deserved a bit more complexity or craft to them when listening to the main hooks.  I don’t want to say lack of effort because I don’t think that’s what it is – ultimately, I just think the uniqueness of Mr MooQ’s music & overall vibe that he’s rockin’ deserves words that stand out just as much I suppose.  But of course…at the end of the day, I also come back to the fact that “Dreaming In Color” IS a love song at its core…and I try to remind myself that sometimes simple is the best approach to such a theme…and that you can’t get too worked up over something with such sweet sentiment.  You all know me…I consider it my job to do what I can to point artists/bands in the right direction or provide some insight on what might be possible for the future of their music…it all comes from a place of love, just like this song does.  So I want a lil’ bit more from the MooQster – is that such a bad thing when I know he’s got it in him to share?  I don’t think so…and I have no reason to believe he won’t provide in the future, he will, he will.  I also have no doubt that for a lot of you fine people out there, this cut will go down nice & smoothly – there’s no reason it shouldn’t, it’s got a gentle flow that welcomes you to listen throughout its length, an alluring sound that would appeal to many, and gentle style that’s charming & sweet to listen to.  Maybe too sweet for some of you though…you’ve been warned…getting a cavity or two from listening to this song is a definite possibility.

Find out more from Mr MooQ’s main website at:  https://www.mrmooq.com