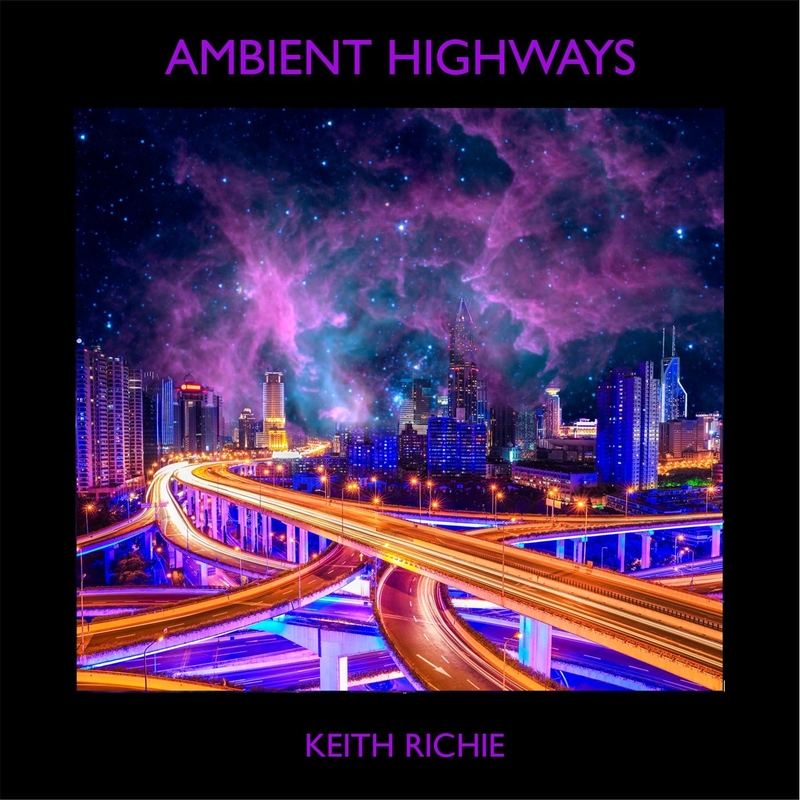 It’s actually extremely easy to get completely lost in Keith Richie’s new album Ambient Highways – I’m not going to be the guy that blames you for looking up to discover you’re on track #6 and thinking you’re still on track #2 as this new record plays through. Smooth, with its subtle-nature, gentle-transitions in sound and overall ambient atmospheres all finding their way to a sweetened mystery that makes up the core of Ambient Highways, this album is so chilled-out you’ll hardly believe that Keith himself is bringing this music to us based out of red-hot Mesquite, Texas, USA.

“Neutrino” starts out dripping electro-elements like rain down onto Ambient Highways; added piano, keyboard & synth-sounds slightly trip into the mix as it continues to rain a sweet & minimal melody. It’s a very clever start and smart combination…that dripping electro is actually running off the roof at a hurricane’s pace, yet the rest of the surrounding elements in “Neutrino” have an amazing way of making this song feel exactly like time standing still. Truly an impressive combination, you’d hardly notice just how fast the BPM on that one aspect is running in comparison to the way the rest of the sounds have woven their way into the fabric of this texture. It sounds serious…haunting…mysterious…yet somehow inviting and certainly captivating to an audiophile’s ears; the way that Keith has got these elements mixed together is perfect and entirely smooth to listen to, seamlessly drifting-out & fading in new aspects of “Neutrino” as it works its subtle-magic.

Now…let’s not forget for a moment that I am born here in Canada. As sweet-natured of a country as it typically is, like many places on Earth it’s still up to us to transcend our locality and discover the truth about the places we’re usually educated upon in one direction. As in…what I mean is – there’s usually a lot more going on in any given place as opposed to the dimension or snapshot in history that typically defines what we know about any place we haven’t been to. I’ve never been to Texas. As a Canadian, all I TRULY know about the state is that you ‘don’t mess with’ it and that ‘everything’s bigger’ there…and again, I’m assuming that’s the perception many of us have without having stepped foot there…

I know it’s hot there, I know they’re supposedly big on barbeque…but again, this is probably all I really know, which is again, planted there from some commercial out there most likely, rather than history-books. That being said…it’s really ALL I have to go on…and I just can’t shake the image of how different Keith must be in comparison to all his fellow grill-masters. I’ll admit…I slightly chuckled to myself imagining the man with like, a full cow’s worth of beef on a barbeque in the blazing heat, blasting the subtle sounds of the second-cut “V Feeling” whilst his neighbour on the left blasts Guns N’ Roses and the one on the right, Lynard Skynard into the summer sun. C’mon…you can picture this scenario…and it’s gotta at least make you smile; and while Keith might be different from the rest of the neighbourhood, let’s not forget that somewhere just around the next block over, incredible sounds in the post-rock genre are being made by Explosions In The Sky. With the ambient genre and songs like “V Feeling” having an incredible amount in common with the post-rock genre…that’s proof positive that there’s still great company to be kept and amazing music coming from deep in the heart of Texas.

The magic of Ambient Highways truly lies within the incredible way it weaves through song after song. The texture of “V Feeling” and its wide-open atmosphere finds its way to an even more expanded-feel by its end, which makes the beginning of “Xenogenesis” seem that much more isolated, brighter, stronger and extra-crispy as it begins. A little more similar to the opening of the album on “Neutrino” with a sped-up backing melody providing the musical-canvas for Keith to paint upon with added electro-elements, “Xenogenesis” is a real triumph on this album. I really dig the way he’s chosen the tones and sounds, the positioning and arrangement of this third tune and the overall melody is straight-up otherworldly – this is the kind of song/sound that will really take you places in your mind. The clarity in production and time taken to ensure every sound involved is placed within the mix just right…I mean, you gotta hand it to this guy; Keith Richie = a yet to be fully discovered Brian Eno.

While each song tends to range in the six-seven minute mark in length, I’d have to say I don’t know if there’s any other on the album that quite fills up that space as beautifully as does the title-track “Ambient Highways.” The keyboard/piano melody and additional string-sounds that combine & swirl together continually bond themselves in stronger ways progressively throughout this epicenter to the album. Perhaps a little darker in the subtext of the melody…”Ambient Highways” is the sound in your head when you’re driving at night with the headlights off…there’s the familiar & comfortable controls you’re used to in this vehicle, but there’s a strong hint of haunting danger to come down the road. Emotionally powerful…this piece really brings out some incredible imagery in the music and really helps us appreciate the magic in these moments that Keith is capturing in full. I think up to this point on the album he’s done terrifically – but it’s a song like “Ambient Highways” that puts him right over the top and into the same incredible bucket-of-talent that holds many of his idols and influences.

And what I REALLY appreciated, was that I thought much of the album’s material continued to find new space, new sounds, new ideas and new textures in the songs to follow the title-track, but the emotions continued to surface and strengthen as well. “Weeping Angels” is a perfect example; a melancholy beauty for sure, but fantastically played, thought-out, and quite honestly – perfectly captured here on this captivating recording from Keith. It has a deep-thinker’s vibe that runs throughout it beautifully, pensively and the music really should allow you to apply this to your own life…to take a moment…a time-out to mull something important over, and help you reach that conclusion meditatively.

In stunning clarity, Ambient Highways continues to display an entire beautiful-idea come to life, and “Faith’s Song (Ptilopteri Waltz)” deserves some real credit for a gorgeous melody. Unlike many of the ambient albums out there, you’ll find that the strength of this one really resides in the middle, whereas most albums tend to drop-off or wander a little bit. “Faith’s Song (Ptilopteri Waltz)” reveals the mind of a man that has a complete vision for the flow of this album and the way the music comes at us; carrying on a similar mystical beautiful-vibe that started within the title-track, the songs to follow it continually impress with their combinations of clever sounds within their melodies. “Arctic Shores” sounds as huge, spread-out and majestic as a massive glacier standing right before your eyes. With pulses of electro-keys supplying another pensive melody throughout, the drifting sounds around it spread out like a thin-blizzard of new snow coming down, covering the tracks from whence you came. A little isolated, a little forlorn, perhaps nearly desolate…the atmosphere in this song is as thick & rich as enveloping mist.

Brightening-up just a little on his way into the shortest and final two tracks on Ambient Highways, Keith brings out the piano-sound just a little more into the mix of “Dew From The Mourning Star.” This was a perfect move here in the late-stages of the album and the low-end chords that come storming into this track give the album the feel that it’s on the way to a proper, tight & definitive conclusion. Kind of reminds me of the music within The Cure’s song “Lullaby,” albeit in Keith’s ambient style of course, but it has this same way of plunking out some tones in a very cool way that sounds smoother than anything the word ‘plunking’ implies. So there you go – that right there is how to describe something when you really don’t know how the heck to describe what it is you’re hearing – I just nailed it right there.

Perhaps he’s saved the best for last however…”Keeping The Dream Alive” is certainly one of the most diverse & versatile tracks on this ambient album. This last song pours-out emotion, passion, confidence; it’s truly rare that you can audibly hear an instrumental song that you feel like might mean something more to the artist or band personally, but this final tune does. Something about it seems to sound more personalized, or important to Keith here…it might be something as simple wanting to nail the ending of this album (which he absolutely has) or the genuine emotions he’s feeling in “Keeping The Dream Alive” take him over by 10% more.

In any event…the overall result of the songs and the layout of Ambient Highways has resulted in a very relaxing and thoroughly excellent experience. Each song building on the last progressively throughout the album as it plays, the music continually finds itself to a wide-array of energies and emotions and never loses the listener by becoming ‘over-ambient.’ Through a massive presence & subtle-personality to each of these creations, Ambient Highways retains a charming & captivating magic all the way through. Entirely enjoyable.

Find out more about Keith Richie at his official page at: http://www.krichiemusic.com