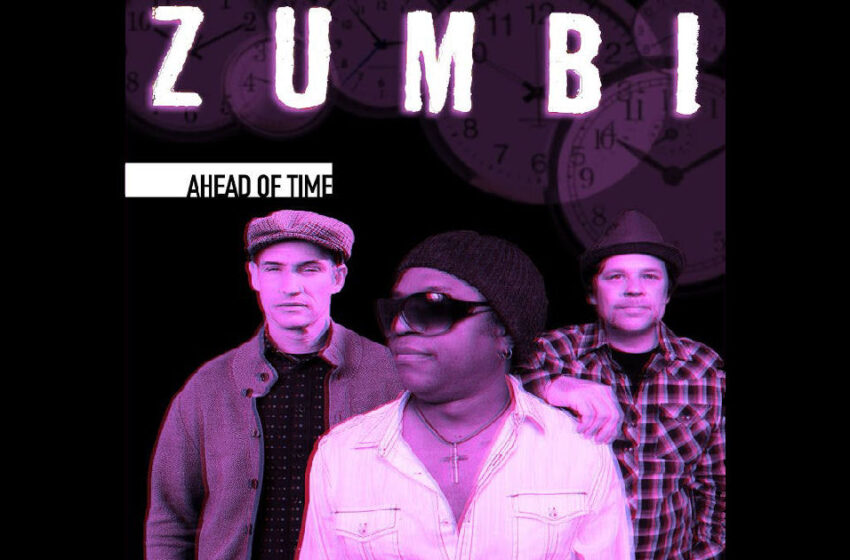 Word on the street is that after about twenty-five years of friendship out there, Dimitri Craven & Jerry Andrews decided to up & make themselves a band, recruited rapper/keyboardist Jason Soto, and here we are.  They’ve got their debut record called Ahead Of Time out & available now, and they’ve left it up to me to choose a couple of cuts to talk about here in review today…dealer’s choice y’all…how do ya like that?  I ain’t gonna lie to ya…9.9 times outta 10 that’s a slick promoter finding a great way to get people to spin a full record, which as you know I likely would have done in any scenario anyway…but for the others out there, don’t get me wrong, it’s a pretty good way of going about things.  I’d imagine most folks would simply choose what they love the best…and if I was to do that, I’d probably be talking about the shortest cuts on this record like “Hypocricy,” “Get Up,” “Everything Isn’t What It Seems,” and the “Outro” – all four of those cuts are essentially flawless vibes.  Dealer’s choice can mean many things though…and of course, depending on who it is you run into out there in music-land, they might wanna talk about something different than what it is they personally enjoy most…maybe, just maybe, making music is about more than that.  I know it is for me…hopefully deep down it is for this LA-based band too, every bit as much as it appears to be.

There are many things that make us wanna talk about music when it comes right down to it, and many things that translate on a universal level as well.  The aspects I enjoy, are usually not too far removed from the ones you would yourself, and quite often vice-versa; if not always throughout the course of an entire record, what we all consider to be singles is usually a general consensus we can all reach just by listening.  For example – I spun my way through Ahead Of Time and had a listen a couple times or more, and by the time I had finished, my conclusion of what I’d wanna talk about most likely came down to choosing whether or not to punk out, and simply choose the route of the shortest cuts & leave it at that – or to go with what my ears told me would be the probable candidates for the most accessible tunes on this album you’d enjoy, that featured what Zumbi was really all about.  Choosing “Fear” and “Wrecked” came naturally – it wasn’t until afterwards in doing additional research online and learning about the band that I learned they had already made those conclusions as well, supporting “Wrecked” with a lyric video, and “Fear” with a full-on visual production where they’re starring onscreen right in the spotlight.  Was I surprised to learn that?  Nope.  Not one bit.  Like I said…single-worthy sounds, or at the very least, the most likely songs to be chosen to fill that role in comparison to the rest, usually stand out to us all.  To me, these would be the inarguable choices to put out there as gateways into what Zumbi’s all about.

I tell these guys what I’d tell ya all…this world is so damn big, that believe me, the people that dig what you do, will find ya.  It might not happen overnight, but good lord, that shouldn’t ever be what this whole music thang is all about either, you dig?  Staying true to yourself & the vision you have for your sound is of paramount importance; yes things can be tweaked and refined along the way, but you don’t want someone to come on by & try to change what makes you, or your music, or even worse – both.  There’s a story about stuff just like that in behind the scenes when it comes to what inspired their song “Wrecked” – and good on Zumbi for going their own way, passing on the suits & ties that wanted to sign them on the dotted line & then change everything about’em…there ain’t no reason they should have gone down that road with the amount of organic uniqueness they have inherently in their three-piece band.  I’m sure if we were to dig deep into the meat of this record, there’s a bunch of stuff I could cite that could have potentially come out smoother or more palatable for the average everyday listener – but at the end of the day, that’s not the common denominator we should ever be catering to as artists.  Zumbi is in the process of tapping into their sound and what they uniquely offer the scene with their music – there’s going to be some things that work, some that don’t – that’s the nature of the game and the reason why if you’re doing it right, you “never let’em see you fall,” but you continually learn & evolve the art & craft in what you do, knowing there’s always a way to level up from where you are now.  As I’ve also often said in the past, as listeners, we’ve gotta give what we’re listening to the freedom to explore & to roam out to the fringes – that’s where the real art lives…and Zumbi ain’t afraid to go there with their Trip-Hop sound & style, which is why I’m onboard here.  I can hear with my ears that there’s a somewhat dissonant & clashing tone that exists in the main hooks with the music surrounding it & know that it’s not the combination most ears out there are ready for on that initial spin…but I’d also be willing to bet that by the third or fourth time through it, “Wrecked” will stick firmly in your head & you’ll likely be singin’ it around the house yourself.  That’s the effect of hearing something new to our ears – we don’t always readily accept it straightaway – but with time & repetition, which you should have zero problem at all achieving with the extraordinary vibes they create in the music of “Wrecked” and the smooth design of the vocal flow & how the lines are broken up so distinctly & echo into the atmosphere – you start to come around more quickly than you might think at first.  Is there a trade that could have been made for a tone to the vocals that might have been better suited along the way?  Perhaps.  And perhaps in making that trade, what’s truly unique would have become ordinary & had way less of an impact as a result.  To me, it’s much more beneficial to err on the side of art and pursue something new that we haven’t heard yet, pass or fail in the court of opinion…because that’s what evolves the music overall over the course of time.  Zumbi’s rockin’ their debut here…and just like every artist & band out there, I’d be devastated on their behalf if there was no room for them to grow from here; they’ve already got plenty of excellent ideas stamped into the music, vocals, and lyricism of “Wrecked” that points to a strong future as they continue to dial-in to their own sound and explore their full potential.  Killer guitars & impeccable drums…the bass has magnificent presence…the mix is highly effective and laced with layers of atmospheric elements that’ll drift in along the way from samples to scratches…the Trip Hop vibe they’ve got goin’ on is right in the realm of where it’ll reach the art-music crowd & dedicated fans of the genre for sure.

“Fear” contains a much more solid example of the tone in the vocals fitting the vibe of the music, if not even more-so in the verses than the main hooks this time around.  “Courage isn’t not being scared, it’s being well prepared to stare into the unknown and still go there” – you see what I’m saying folks?  Tons worth your time in listening to here – that’s one of the best lines you’re gonna find in any song this year.  Listen to key moments like where the backing vocals spring to life around the 3:35 mark – that’s a majorly appealing part of the song that’ll have you wishing they might have thrown a bit more of that into the mix along the way…short bursts of transition are often what’ll keep the people coming back & it’s a smart part of the design.  Just keep your ears objectively on where those hooks are comin’ from Zumbi, that’s all I’m sayin’ – that’s a massively universal sound right there & catchy as it gets for the personality you’re providing, and that lively spark we here there between the lead & background hits the mark for sure.  For me, the balance on display throughout “Fear” showed even more strengths than what I was enjoying on “Wrecked” – all-around, the verses of “Fear” & what occurs between the vocals & music were a huge highlight for me…I think that sounds like Zumbi right in the zone where they’ve got the most out of their sound unified as one.  I ain’t hatin’ on the chorus by any stretch…it works…I don’t know that it necessarily raises the stakes from the slick smoothness of the verses and the impact they make there in particular, but yeah…it still works, it’s still catchy, it’s still a solid contribution to this song.  Lyrically, I think these dudes are on plenty of gold and have a lot of insightful things to say – they proved that with “Wrecked” already, and they take it even further on this next cut; overall, I really like the way they communicate in a poetic & artful design…and I mean, c’mon y’all, the swagger on the m-i-c throughout the verses of “Fear” are as stellar as stellar can BE.  “Feel the fear and do it anyway” – I could pull quotes from this track & keep us here all day readin’ to be real with ya…there’s a whole lotta the keys to livin’ LIFE ITSELF on this cut that I hope people are payin’ attention to out there.  When it comes to the design & sound of the music they make, they continually have no problem standing out for all the right reasons whatsoever…the bass, drums, guitars, and keys you’ll find between these tracks I’m talking about, and throughout the distance of Ahead Of Time, all make a fantastic first impression on us and reveal many of the main strengths that will benefit Zumbi as a band going forward from here.  Lots of positives to take away from this initial experience with Zumbi’s music…I dig what I’m hearing already, and I’m straight-up excited to hear where the future is gonna take them with the potential they have.

Listen to Zumbi at the official pages below!