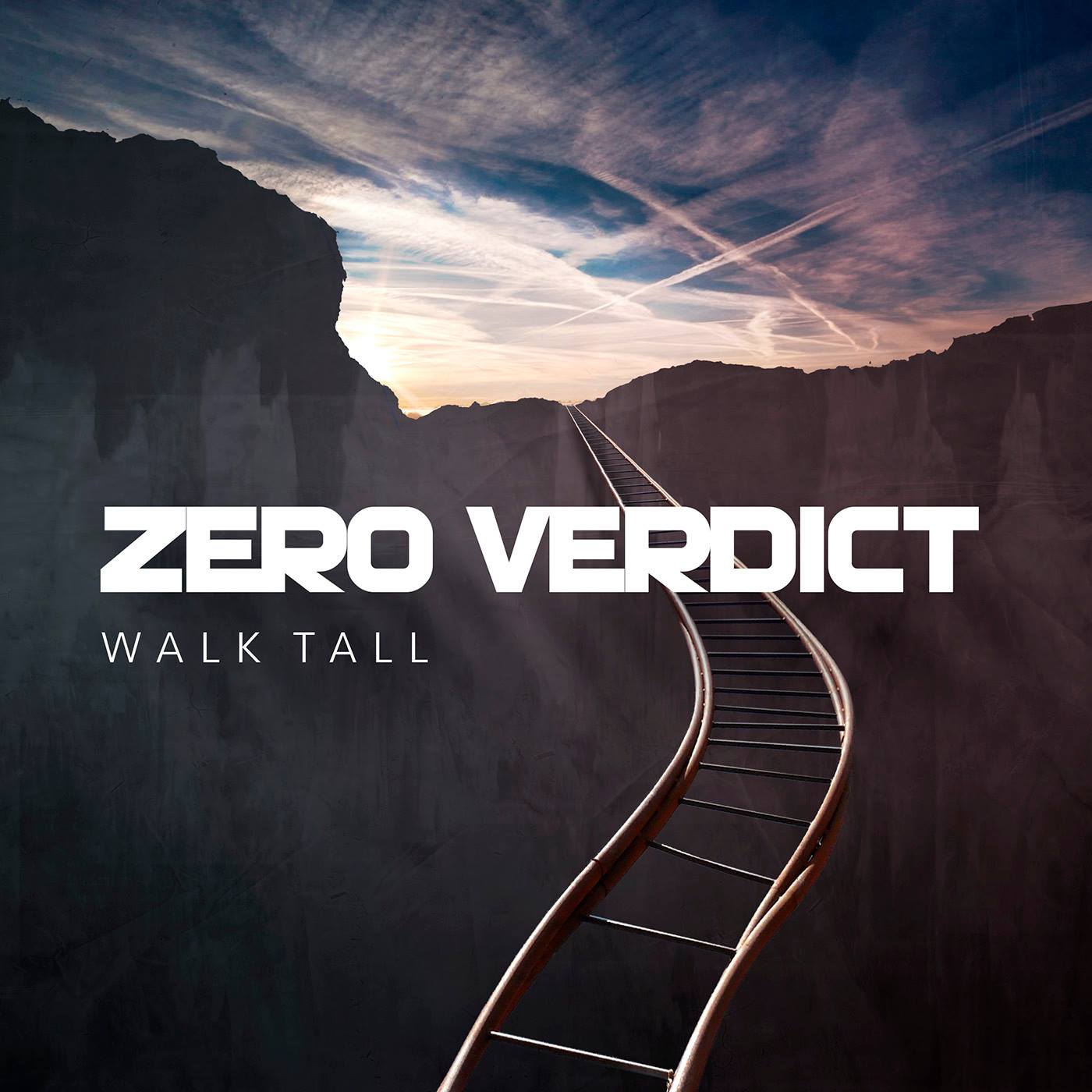 I’ve known about the music of Zero Verdict for some time now…wasn’t too long ago that I reviewed the lead-single from this very album, Walk Tall, called “Train” in fact. I’ve known this band to make music at an incredibly high-caliber since being turned onto their music; their style reaches a little further back in my own personal timeline than it fits in with what I currently listen to – but let’s face it, as a reviewer at some time or another, I’m listening to everything. For me – it’s been awesome to take that trip back to bands I loved in the 1990’s like King’s X and Extreme…Zero Verdict packs such a similar punch in their music. With the depth of vocals and harmonies at the strongest they’ve ever been, Zero Verdict even takes on moments that sound like Queen with a shot of adrenaline, bordering on sounds you’d find in the traditional metal music that tends to dominate much of Europe’s scene still to this day.

Being European themselves and based in Oulu, Finland – you better believe they come from an angle of genuine passion, interest and love for their style of music. No joke – this is more than likely the modern-day version of sounds and styles they grew up on listening to all blended into their own incredibly powerful and energetic style. Zero Verdict come out exploding more confidently and tightly than ever before on Walk Tall – and for a band that’s managed to impress me in the past, that’s truly saying something – they’ve exceeded my expectations on this follow up full-length album to their 2014 release of the Clarity EP. “Alive” starts out the album with a bone-grinding guitar-riff, explosive drums and spot-on vocals that bring out the real theatrics and dynamics as this opening tune shifts between parts.

“Release Yourself” is another example of Zero Verdict putting the power & precision into every aspect of their music. The complexity of the guitar is something you can hear easily – but you can also hear exactly how well each of these notes are played as they come out clearly, screaming out in perfect tones. Definitely a real achievement here on their harmonies…this is some amazing classic-rock style type stuff happening here – they sound great but it’s the power of which they release these vocals that will really blow your mind. Take the following cut – one of my personal early favourites on Walk Tall called “Lie (In My Own Life)” – the crunch, stomp and roll through this song’s verse is HUGE…the shift into the bridge/chorus is beyond fantastic. The vocals are right up to the top of the rafters as Sami Huotari extends past belief and into the stratosphere – I literally don’t even know how some of what he does is even POSSIBLE on this song. Bruce Dickinson and Ronnie James Dio would be first in line to shake Huotari’s hand and say ‘great fucking job son’ – it’s that level of powerful and truly that incredible.

“Be On Your Way” sees the band calm down for a moment and really let some of this wonderful instrumentation take a turn in the spotlight. The drums from Pekka Leppäluoto are as perfect as you could ask for – he stomps out a perfectly-mixed kick-drum beat that fills the heart of this song. With a clever switch mid song to a piano breakdown, it becomes a true lighters-out moment from there with “Be On Your Way” taking that old-school rock-ballad style and your ears for a complete adventure. The ending is just pure-awesome…as much as I like the entire song and think it works perfectly throughout – I’d be lying to you if I didn’t say that it’s truly the final thirty seconds or so of this track that really puts it over the edge for me…loved it.

And not like I was expecting them to take much of a break, but of course they don’t keep the tempo restrained for long; “Live Like No Tomorrow” races like a frantic heartbeat from a marathon sprint! The confidence of this band is pretty much astounding really…each of these players holds their own so incredibly well that aside from your own personal taste, there’s literally nothing for you to not like. They take the incredible energy of “Live Like No Tomorrow” into the amped-up synth-infused energy of their lead single “Train.” Another incredible job from Huotari and standout guitars and bass shine throughout this first cut out there to the public from Walk Tall. I’ll fully admit…when watching the lyric video in the review for “Train” in the past…I did happen to notice that their lead-single was coming to us buried deep in the album as the sixth track. Another truth I’ll tell ya…is that this certainly piqued my curiosity…sometimes you gotta wonder what-all might be coming at you BEFORE track six when that’s the first single coming out – thankfully, every preceding moment and song before “Train” is every bit up to that standard and quality. As far as their genre and style are concerned – they have their pick when it comes to the music they make; any of these could easily become a hit for them, they all have massive hooks and are all assembled, performed and delivered with just the right ingredients.

I’d say if anything you can really start to notice melody creeping in more and more throughout the album as it plays. The menacing and sharp guitar work from Tapio Mattila will always lead the way through their music with his instincts and wicked style – but through the vocals of songs like “World Doesn’t Need A Hero (Like You)” and later on in “My Misery” you can really hear the added push of pop-rock influence blending into their heavy rhythms. It gives songs like “World Doesn’t Need A Hero (Like You” the added edge of being something the rest of us who AREN’T capable of being a stand-in for Bruce Dickinson like Huotari could be, a genuine shot at singing along. Not only is the instrumentation top-notch once again…right around the two-minute & forty-second mark you will absolutely find one of the best moments on the Walk Tall record as they break the song to reveal the true jazzy nature behind this rad rhythm.

As the brilliant twists and turns of “Delire Grandiose” play through, I feel the need to remind you all, dear readers…that no member of Zero Verdict has lined my pockets in gold…what I’m telling you is the honest truth about an album made with an incredible dedication to the precision of sound and style. I’ve offered you no false-pretense – I’m ‘outside’ of this genre by a fair margin these days in my personal life, but that being said – Walk Tall is an album made so incredibly well I feel like I actually could listen to this forever and for always. I made a firm commitment long ago to listen to everyone, but also one in search of the best of the very best out there…and for the genre and style of hard-rock that Zero Verdict makes – the build and rise of a song like “Delire Grandiose” really goes a long way to prove that these four guys truly are the best of the best out there in this style right here, right now.

Led by the storming bass of Juha Haipus and the pounding drums of the rhythm-section’s other half, they storm through the power-anthem of “My Misery.” Seriously…when you listen, there’s damn-near an operatic element to Huotari’s incredible vocals…the attack is amazing but the precision in tone is something you could listen to yourself and your own father would feel proud simply by association. Every song is like a complete victory from beginning to end here for the hard-rock genre. I’m not usually that into the style that Huotari sings in when other people attempt it…that’s just me being 100% honest again…but the way this guy pulls it off just blows my freakin mind each and every time.

For all his perfection and my own love of melody, it was interesting to me that the most you can hear Huotari struggle is actually in the album’s slowest and final tune “Remembrance.” Nothing so extreme that it would be off-putting, but he’s been 100% bang-on throughout some of the most extreme parts you’ll hear recorded…to hear him somewhat out of his element and a few slight missteps in the solidarity of his tone on this final tune was a nice gentle reminder that he is indeed human after all. Again…all that being said, the moments of slippage are far and few between on “Rememberance” and overall this was an awesome departure from the ravaging sounds of Walk Tall and a great way to approach the end of the album with finite certainty. Guitars are brilliant once again, the harmonies thicken and strengthen the vocals and the song itself is more intimate and closer to Zero Verdict than any other track feels on the album.

Zero Verdict SHOULD Walk Tall – this album exudes confidence and skill and contains a power & precision that towers above the rest in their genre – this is world-class skill.

Find out more about Zero Verdict at their official Facebook page: https://www.facebook.com/zeroverdict