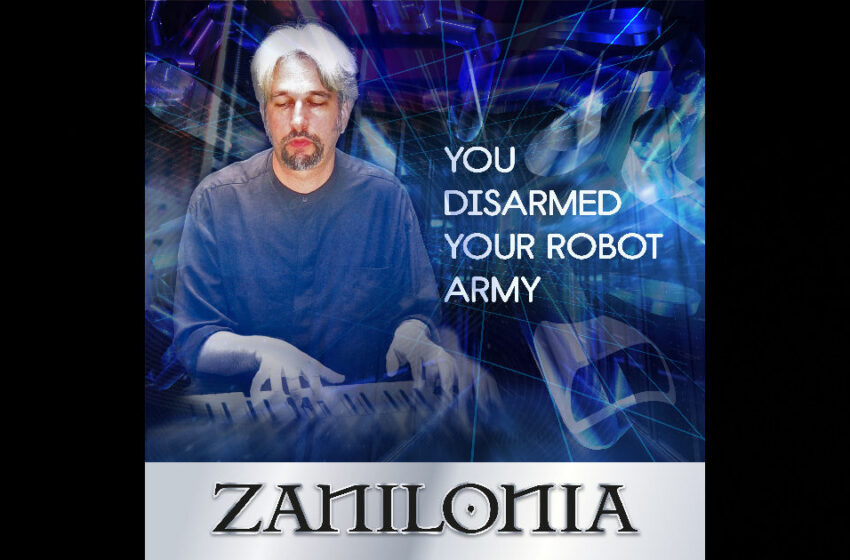 It’s been really interesting to read the backstory behind the recording of this song and the journey that Zanilonia has been on over the past seven years or so of its existence.  Centered around the creativity of David Zee, who considers this project to be a virtually-based band with open doors from the sounds of things…he comes up with his ideas and enlists the added talent required should it become necessary – that type of thing.  Contrary to popular belief, yes, this is virtually different than a dedicated solo project is, and of course, having this kind of all-inclusive attitude can definitely lead directly to all kinds of creative breakthroughs and uniqueness we haven’t heard before as a result.  You always wanna have a stable core you can build around…that’s where David comes in; I have a lot of love for the online-based projects & bands out there that take a similar digital path – I mean…really…if you think about it for just a moment, logically you’d have to realize it’s only physical locations that have been what’s kept the best of the best apart for years, and the internet neutralized that hindrance.  Still, we’re right at the very dawn of all these cross-country collaborations to follow in our future – there are more artists & bands out there realizing how viable & reliable this method of making music can be every day.  So yeah…I dig all this kind of stuff; it was easy for me to get onboard with Zanilonia’s ambitions and the creativity to be found here, even on a visual level just reading about this new song & the information beyond the music.

Like, for example – not even BROKEN BONES can slow this dude down.   I read about how David had broken his right wrist during the time “You Disarmed Your Robot Army” was being made & specifically designed so that he’d be able to nail it with his left hand instead.  You read that correctly.  I’m not here to be the guy to tell anyone that just because they CAN means that they SHOULD…but I do fully salute this serious die-hard effort to continue making music regardless of any setbacks…that’s bloody inspiring.

I would have been on the couch, complaining my life away, in a party for one filled with self-pity tears – that ain’t even theoretical, that’s proven to be true after I broke my own right arm years and years ago.

When it comes to “You Disarmed Your Robot Army,” I think the title alone would make it clear to most that they’re not likely to be in for a typical tune…that’s a fair assumption.  To hear David’s perspective on it, he was going for a Gary Numan-esque style of synth vibe, and by his own admission, the end results in what you’ll hear after all was said, sung, and done…became something quite different than that.  Which is really interesting actually if you know your music-history & Numan’s tunes & whatnot – you can completely hear why David had that inclination through the main riffs; and I once again admire the guy for kind of abandoning ship somewhat, to go where the music was naturally taking him instead – as a result, you might not even know about the Numan-influence were it not for the details of the liner-notes…”You Disarmed Your Robot Army” adapted right into Zanilonia’s strange and wonderful world of sound.  Lyrically, this track has so much to offer ya that I could write a whole essay around the cleverness you’ll find in the way David writes his words with such impressively vivid detail…and I suppose for myself, that’s probably what I ended up feeling like this song’s main advantage was overall.  I dig the synths, I dig the structure & production for the most part, and I think the words are absolutely killer – this is one heck of a story that’ll take you all the way through zombies, aliens, robots, monsters, technological battles & more, and it’s fully loaded with compelling lyricism you can see visually in your mind.  The value in that to us as listeners, is priceless…you can see what you hear in a song like this one.

Sometimes a great advantage can also become a bit of liability if we’re not too careful.  Any time I hear a singer struggling to hit their full potential, I usually take a quick look at the demands put upon them by the words themselves.  In the case of a cut like “You Disarmed Your Robot Army” – yes, I do think that David has more to give, and of course I’ll be honest with the man about that – but I do also consider the fact that the demands he’s created for his vocals are outright SUPERHUMAN in the way this song has been written as well.  Not only would it be a mouthful to sing based on word-selection alone, and a monumental task to memorize for the exact same reason – but he’s patterned out the melodic hook at a quick pace as well, which has him getting to the tip of the notes he’s looking for in just barely enough time.  There are ways around this…and they do admittedly take a ton of time – in fact, that’s the main ingredient – time.  Time & experience.  Knowing a song inside & out and not only being ready for those next words to be sung, but the power & strength required for each and every syllable along the way.  I’d be willing to bet that if you were to ask David right now if he already feels like he could sing “You Disarmed Your Robot Army” better than he did at the time he recorded it…I’m positive he’d tell you yes.  Not because he did a bad job on it as it stands – that’s not what I’m saying whatsoever – he’s a good fit for this tune & he’s given it an intentionally colder/robotic delivery to suit the needs of the song, which is smart – I’m simply saying that the more time he gets to spend with it, the more fluid the mechanics of the melody in his robotically-inspired single will become as the years march on.  Clear as mud, am I not?

It’s really a double-edged sword no matter how you slice it when it comes to artistic pursuits…where a performance will stretch outside of the typical singing style we’re all so used to into something new – sometimes even those that ‘get it’ still seek out what they’re just more comfortable with, while others will cheer on uniqueness like this ‘til their voices get sore – I feel like I ‘get that’ from both perspectives.  As somewhat of a hopeful wordsmith myself, I appreciate the details in the writing more than anything else here…and I love that the whole song really came out of a chance encounter with David copping a second-hand book that would go on to inspire this tale you hear on “You Disarmed Your Robot Army” – not only is it verifiable proof that at least SOMEONE out there still reads (thank-you David!), it’s clearly been great source material to provide a level of inspiration that even broken bones couldn’t calm down.  It’s quirky, it’s fun, it’s proudly different…the main hooks in the instrumentation & the chorus you’ll find are memorable…Zanilonia is complete & total proof that not everything has been done in music yet…not at all, not even close.

Find out more about Zanilonia from the official website at:  http://zanilonia.com