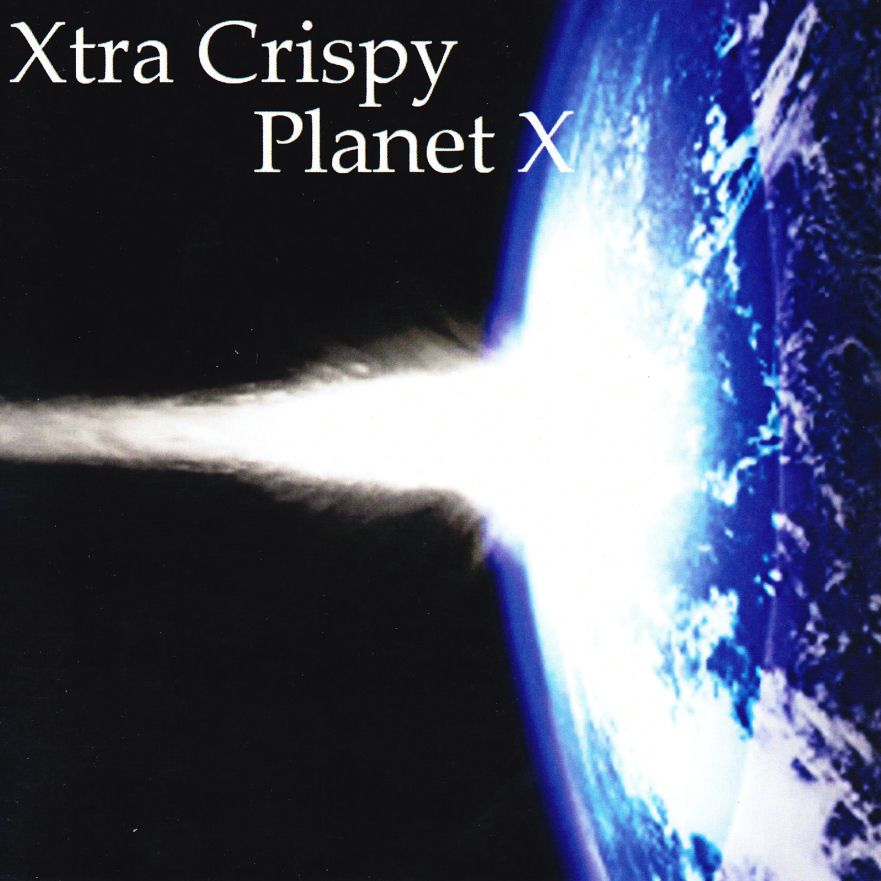 I gotta say…there’s a great chance I am going to piss off a neighbour or two if the new album from Xtra Crispy continues to stay as crunchy as it begins. I love the description I read of this band from Akron, Ohio…it reads simply: Original Blues – Rock – Future Blues.

If someone had told me there was already future-blues available on the market TODAY…I’d’ve been sure you’d been yanking my chain…but I’m not only seeing that description with my own eyes – I’m hearing it in my own ears. Not even remotely kidding…at the outset of the beginning to Planet X, the opening song “Geronimo” just POUNDS with authority in a way that I’ll fully admit…I don’t always expect the blues to veer off into. In fact…if you were to pin a guy like me right down to the mat for an answer or two…I would have been way more likely to compare this initial stomp to the music of a band like Primus or perhaps Screaming Trees…or at the very least Mark Lanegan on his own. There’s an element of mischief & mystery in the air of the music of Xtra Crispy…for some reason this first cut really seems to play on like it knows something about the songs to come that we don’t…it was like this was the first dimension or side they were going to show us, with lots still to come.

Maybe it was as simple as a nod to a real switch into more straight-forward blues-rock to follow with “Live This Song.” Possessing the classic elements of great guitar provided by John Gmerek and a true authentic sound from the vocals of Jerry Principe…this song sounds like perhaps less of a challenge for Xtra Crispy but also terrifically refined in the sense that it’s really come out quite flawlessly. Certainly a more traditional and classic tone to this one for sure…which then led of course into the unbelievably awesome third cut called “Hope She’s Home.” Perhaps this song represents more of that ‘future-blues’ genre that’s being created before my very eardrums…

You’d be extremely hard-pressed to find a voice more paired-up and matched to the blues sound than that of Principe…the guy is just an absolute perfect fit. Tony Rockich definitely deserves a moment for the effort here on “Hope She’s Home; the guy is KILLIN it back there on the throne and making the energy come alive in the music with some wickedly innovative drumming inside these classic-riffs. Just immaculate filters on the guitar-sounds…this is one massive, massive song that delivers maximum satisfaction from the moment those boots begin to stomp the floor. It’s like the freakin’ Foo Fighters took a decided step into the world of blues-rock…Xtra Crispy takes just as few prisoners in their own aggressive & skilled approach.

A little closer back to that classic groove & rhythm combo of the up-tempo “Hot Summer Days,” and the slow, mellow & subtle psych-blues track “Gone;” both good songs in their own right but depending on how you like your blues-rock to be – you’re more than likely to like one of these tracks heading towards the middle of the album better than the other. “Hot Summer Days,” might be the song that maybe comes the most natural to them…it’s definitely a slight variation on some classic blues-rock riffs, melodies and timing. Personally I’d fall into the boat of loving “Gone” just that little bit more.

Ok. A lot more. “Gone” is just a lot more ME. Love the vocal flow & rhythm of this song, delivered expertly once again from Principe…dude is definitely the real-deal for what people are looking for in a blues sound. Great tone and confidence in this singer; he’s put in a captivating performance on every single song. He carries that style into the following cut “Goodbye;” the quintessential blues-rock sound, slowed down here in this truly warm and inviting song. Love the guitar solo from Gmerek in this tune.

A lot of people don’t realize how much an artist like Lenny Kravitz is actually steeped in blues music inside his pop-rock overcoat, but on “Hanging Tree” you’ll swear that Xtra Crispy has even borrowed his guitar! Excellent harmonies and song-writing ideas in this song…tones to die for from the guitar once again and overall just a really powerful song here on “Hanging Tree.” A little more of a lean towards the rock-edge of their impressive sound-repetoire…and I dig the way it’s all come out…sounds like a big, badass & mean-mother of a song.

The honour of longest-song goes straight to “Wave” and it’s a well-deserved honour indeed – this song deserves the extra minutes & bars. On an album full of confidence and precision-play…”Wave” still manages to stand out cresting high above the rest. Probably guitar that Gmerek could play in his sleep, but this stripped-down sound is working wonders for Xtra Crispy and really put the meat into this sandwich. Probably be a strong contender for my favourite on the album…were it not for amazing sounds still yet to come…

These three talented players LIGHT it up on the album’s title-track “Planet X” and really put some funk into their blues in this energetic & rocking track near the album’s end. Definitely a groove that once again cannot be denied; combined with the throat-ripping singing from Principe…this track really puts the work into the stereo-speakers. With an excellent breakdown just around the halfway-mark, the explosion of rock that bursts forth from the third minute will make you question which genre you feel like Xtra Crispy truly belongs to.

But as if they meant to supply both the question and the answer itself, they launch into the final song, “Whiskey Bay.” I am…such…a MASSIVE SUCKER…for melodies this pure & golden. Honestly…this final track is every bit worth the distance it takes to get to it at the very end of Planet X. Dropping a little bit of the perfection of his performance in favour of one that communicates in a more intensely raw & real feeling; Principe once again provides every reason you’d want him standing in front of that microphone in this highlight finale performance. Another dose of subtly like the knockout punch you don’t see coming – Xtra Crispy couldn’t have possibly ended off my first experience listening to their excellent music more perfectly than this.