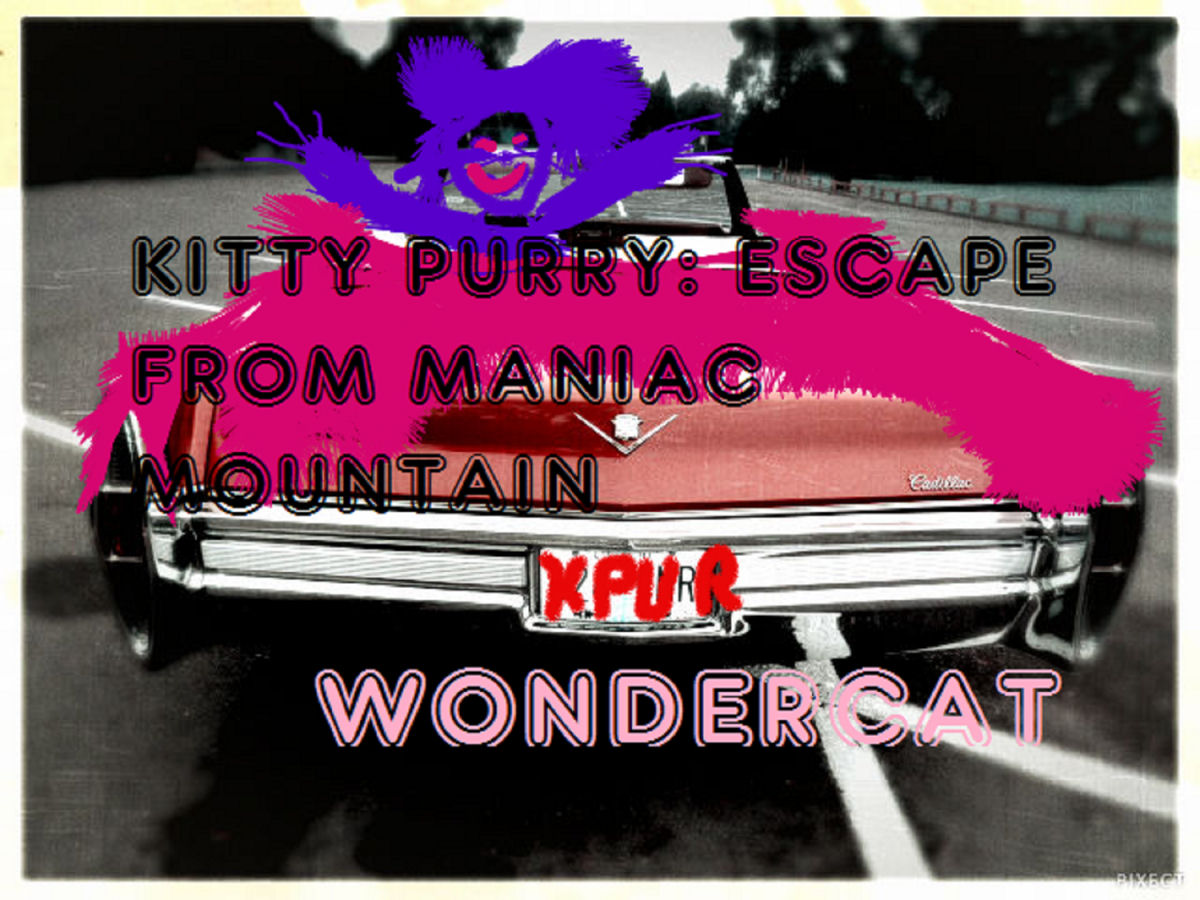 I totally used to get this high.

Those days were long ago…now I’m old & just chasing that dragon. Believe me…I’ve lived in BC, Canada all my life so far…and I’ve definitely had my share of trips or two…I still get high – but it’s just been a very long time since I remember being as cooked-over as the minds behind the music of Wondercat. Just want it on record…I’ve been there…I have recordings like these somewhere locked in the vault and now hiding from TMZ… I miss those days.

If you’re anything like myself…you’ll crack a smile at the beginning of the opening ‘tune’ “Kitty Purry: Escape From Maniac Mountain” – mainly because you’ll get a great idea of where this is all about to head in mere moments from the very first fuzzed-out notes begin to play and whatever your idea of normal is…it’s not going to sound like that. I suppose you could put that in the positive-column for Wondercat…they certainly keep you guessing. As for the rest…it’s going to take more than a little adjustment for most of you to get used to, or potentially enjoy this. If given only a single-word to describe Wondercat…I’m thinking it’d be ‘abrasive.’ Whether it’s the crass nature of the lyrics, or the overblown production affecting the vocals & music, or the ill-timed & ill-toned sounds…this is bound to be as tough on your ears as it has been on mine.

But I’ll tell ya firsthand…there’s no possible way that I’m telling Wondercat anything new here in saying that…they’re well-aware of what the music they make sounds like and the small-niche market of people this will appeal to. Oddly enough…there IS still melody here; despite the smooth-as-sandpaper sound to it all…Wondercat still has actual melody written into these rude-ass songs way-down underneath it all. You can hear it in the title-track, you can hear it in “Cumfucker” and audibly the rest as well; which is honestly kind of strange…I’m surprised they were focused long-enough to incorporate some. Especially into a song called “Cumfucker.” It’s titles like that which truly make me wish I was that younger version of myself again…then I’d still have some sort of element of shock-value or surprise come from it. As it stands…it’s more or less falling into the category of ‘heard it all before’ and usually with less abrasion to the ears. It really does make you wonder…bands ask me all the time how they compete against all the other bands out there to get the attention their music needs…and in reality they’re not even just solely competing against the current day & age, but all of music’s accessible songs & history; that’s a hell of a lot of music…and there’s a lot of extraordinary stuff out there…and then there’s this. This would take a lot to reach for and add to any playlist. Some of the jokes in “Cumfucker” and lyrics are pretty genius…I’d never deny them that…but there’s no possible way this or any of it can get across to the listeners as it’s currently recorded. Again…they know that…this isn’t news to Wondercat.

There’s a song I play sometimes for people…it’s called “You Lost It” by a band from the grunge-era called The Thrownups. Have a listen to it…and you’ll hear why I’ve brought this up…that’s about the closest comparison I have to Wondercat. As close as this might get to palatable so far upon this record, “America’s Most Hunted” has a few redeeming qualities? Aside from the thrashing percussion sounding like it’s being provided by the three-year-old next door at playtime…I suppose there’s a few lines of lyricism in here that work okay enough? The switch at 1:15 would have worked well too…or at least I’d think it would have if it wasn’t all over the map for its timing and coordination.

If anything I’d assume this is made by fairly well-versed musicians that are probably sending this EP out to reviewers in effort to see who’s actually going to be REAL with them…and who’s not. So here you go…at the very risk of my own friendly reputation…I’ll tell Wondercat direct: This music needs to stop. I swore a long, long time ago that I’d only ever seriously bring out the teeth to bite or make a swipe at a band or artist in the event that I ever heard an artist or band (Like the Thrownups) who I truly believed was out to actually HURT music in general. Like a spy of sorts…worming their way in there for the football-fans and trying to take down music from the very inside. I can’t allow it. I don’t hear the effort…I don’t hear the sincerity. I hear attempts at being cool…I hear gimmicks gone wrong throughout the entire EP…and dammit, SOMEONE has to call them on it…so that someone today is me. It’ll be interesting to see how they take it in…I wouldn’t expect them to care less about what I, or anyone has to say about it.

All this being said…it oddly does get slightly better towards the end. “Pussy Blood, Pussy Tape, Hippie Love” actually has a pretty rad rhythmic flow to it – whether you can get behind the words is gonna be completely up to you. It’s cool with me…I can totally picture myself humming this song around the studio in the next week after having had this experience. To their credit…and you can take this to the bank and cash-it, quote me direct and take it to your grave as the truth – I’m not about to forget this experience with Wondercat any YEAR soon…so if it’s a memorable impact they were looking to make, thumbs-up…mission accomplished cool-kids.

If there IS any serious effort here buried deep…it comes through the final track “Animal.” I actually don’t mind the idea overall…the song is actually a reasonably well-written one even if not played to its full-potential. The vocals…again, they’re abrasive…but they’re closer to the melody than any other on the record – there is…somewhere…an idea here that works. Underneath the static and the blown-out vocal-recordings…there is a song that could be sung and the potential for this moment to be greater than it currently is…and maybe that’s where they can branch off from…if any of this is taken seriously.

But I wouldn’t guess that it is after hearing as much music as I have over the years…this is for shock value and something to talk about – and whether or not that’s worth your time to pursue…is up to you from here…you’ve heard plenty-enough about what I have to say. Good luck!