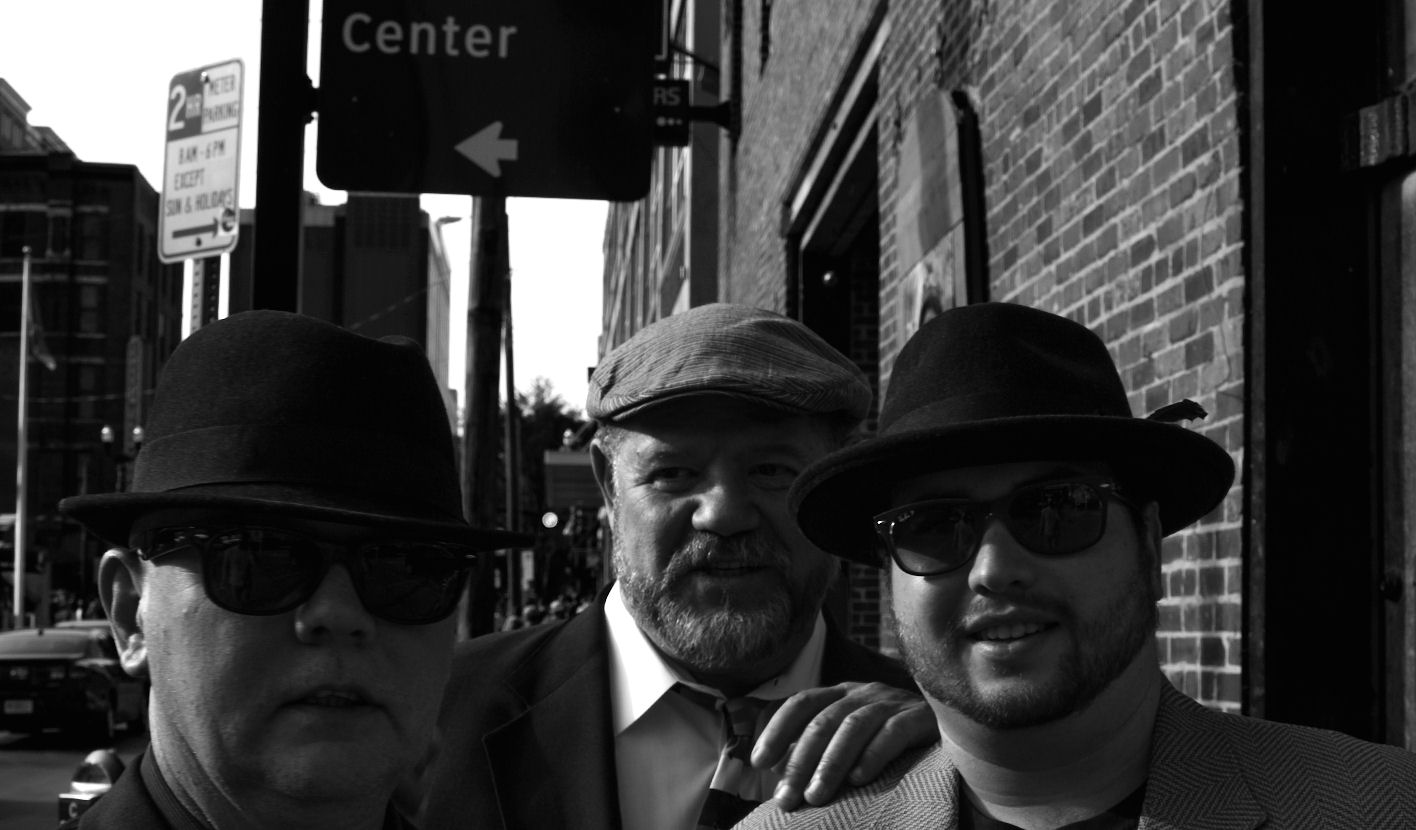 Meet Willy And The Planks – these guys know what’s up with the blues.  Bringing out the sound of the deep south, the Tennessee-based three-piece have the right recipe in place for music you can FEEL – and at the heart of it all, that’s what the blues are all about, ain’t it?  Formed around the talents of guitarist Willy Gibbs, Willy And The Planks, they get it; solid talent needs solid support – and Willy’s found that through the rhythm section of Mark Noble (Bass, Vocals) and Chris Gibbs (Drums).  Together, these guys roam through the blues with confidence, style and ambitious material on their new self-titled album.

Overall, they’ve got a good thing goin’ on here.  It becomes apparent just how well this band knows itself early on in the album as they speed-up & slow-down tempos in progressive structures that keep the themes lyrically-rooted in the blues while providing a real contrast through the often lighthearted approach to the sound of the music.  What sounds impressive the entire time is their ability to keep their movements so unified and in-step with each other…each member understands where the other players are headed at all times and when to take a moment in the spotlight or support a wild solo.  I mean, yeah, of course when it comes to a recording, you get that time to practice-up and get it right – but whatever, I still think there are audible clues you can hear in a band’s music that point to whether or not they fully gel as a band…and these guys clearly do.  I not only hear a bunch of great blues tunes on the new Willy And The Planks record, but I hear the genuine passion of three guys that really WANT to do this music-thang…and quite honestly, that enthusiasm you hear in their music sounds freakin’ great!

Willy And The Planks often keep the vocals simplified, rhythmic and effective.  They certainly hold their own in every situation that presents itself along the way with big, bold tones or the perfect matching energy to the music surrounding them…they’re written somewhat classically, traditionally…not necessarily so much as ‘safe’ as they are completely appropriate for the grooves being supplied.  “Keep Your Hands Off That Girl” is a solid example of what I mean right off the bat in the record’s opening-tune; they’re still a main feature of this first song, but you can hear that the instrumentation drives the music of this band.  The vocals drift in & out, taking part almost at will on “Keep Your Hands Off That Girl” and coming into the song at somewhat unpredictable times…and like a great blues-band is inclined to do, they’re often used as an additional rhythm-line & instrument to add to the ideas we hear in the music.  “Keep Your Hands Off That Girl” eases us into the album with an inviting and smooth roll through the blues, sliding guitar tones from Willy ringing out captivatingly while the rhythm section holds the fort with compelling parts of their own.  Just as many hooks in the music or more than the impressively expressive vocals supply, they do a great job of achieving real balance in their writing & performances to put everyone in the spotlight for at least a moment or two to put their chops on the table for all to hear.

As if on cue to support my theories about why I like this crew, “The Dark Side Of Me” comes up next on the record.  I mentioned that unified-sound of this band and the way their music moves, and this is a highlight example of what I meant by that.  The timing is complex, the sound is still massively accessible – and they stay together the entire time as one entity, one vision, one unit.  Are they on-time the entire way through?  I mean…you’d be looking at a whole host of potential ‘artistic blues-license’ arguments for any slight wandering or be taking part in the musical-equivalent of splitting the atom trying to figure out where any tiny slips in time would exist – but what makes that issue a non-factor completely is the fact that these guys move TOGETHER.  Whether speeding-up or slowing-down, Willy And The Planks are there for each other in support musically and always ready to fill in the gaps or take the weight; everything still sounds like it’s right where it should be and belongs as the song flows.  “The Dark Side Of Me” is a great tune for Mark Noble personally, lots of room for those meaty bass-lines and massive tones in the vocals and he takes on a challenging song with resounding confidence.  Excellent solo from Willy just past the two-minute mark, love the tones on the guitar and his approach to the instrument itself…definitely a talented man.  Quite often, it’s that reliable stability of the rhythm section that allows him to wander and roam through those wild solos…and that’s ultimately what you want when you have a feature skill like this that can pull people right into the band.

Case in-point, “Miss Maybelle” – arguably one of the most fun cuts on this entire record, largely due to the absolutely hook-laden guitar-lines laid down by Willy here.  Technique and groove combine perfectly hear…those harmonic tones are off-the-charts amazing, the main riff is playful and powerful…the grinding rip of the slide is as charismatic as music can get – everything about this track beckons you to listen.  Crisp & clean hits from Chris on the throne punctuate the rhythm & groove of “Miss Maybelle” and they take it to the next-level in the vocals as well, sounding more confident than ever in this more lighthearted-side of the blues.  Smart tune though…love the subtle hats on the way into the song, and the insightful amount of real definition they’ve placed into each part of the music – they sound fully in control and like they’re having just as much fun playing “Miss Maybelle” as we do listening to it.  An early highlight on the record that I can’t imagine anyone not enjoying – this is pure fun & great sound combined through real skill and solid entertainment. 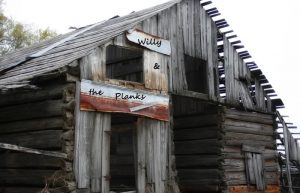 Wild Bill And The Wood continue their new album by heading into the most blues-steeped cut of the set, directly in the middle with “You Got Me Cryin.’  Definitely more on the traditional-side of what you know from the genre here, doesn’t mean they sound any less jazzed about the blues they’re making – “You Got Me Cryin’ is expertly performed with real feel.  Like…if there are blues-fans out there looking for that specific track that they know exists and are just waiting to love on the record, chances are, this is a strong candidate to be that cut.  While they might not be reinventing the wheel here, not much of the blues tends to as a genre with such deep roots of respect for the style & sound, the most important thing becomes keeping that roll flowing smoothly…and that’s where Willy And The Planks are doing things RIGHT on “You Got Me Cryin.’  As a reviewer, I’ve certainly heard many a song that reminds me of this tune along the way in the blues genre – but what gives Willy And The Planks the edge is that degree of purity that you can hear in the way they play that tells your ears they really feel these songs.  That passion is contagious in all the right ways when we listen and it plays to their advantage when hearing songs that seem more familiar in style like “You Got Me Cryin.’  Everything is stunningly clear in the music, movement and pace of this cut…real blues here…these three wear this sound really well.

They haul out an added dose of blues-cool through the slow-burning energy of “Lonely Town Lonely Streets” – a track I felt like was a real highlight in this set.  Something about the commitment to the sound and style of this subtle groove has the band sounding tighter than ever…not even sure I can put my finger on what that is.  They might just know this one better than the rest…even on an album where they’ve sounded in-step with each other the whole time, they really hit the mark here and raise the bar once again with “Lonely Town Lonely Streets.”  Standout vocals, great rhythmic bass-lines…love the subtle crunch of the gain on the guitar tones…really impressive drums that keep this cut low-key and still moving expressively and vibrantly throughout.  We don’t always need to know exactly how to say in words what music makes us feel – sometimes we just feel it when a song really connects to us; “Lonely Town Lonely Streets” was that track for me.  Great atmosphere and depth on this tune.

“I Feel Good Little Girl” has a jam-style feel to its bluesy-flow, Willy And The Planks are definitely locked-in to their sound at this point on the record and continuing to deliver the good-times.  I didn’t personally feel strongly one way or the other about “I Feel Good Little Girl” but certainly can acknowledge that they play this one just as well as any other.  I suppose at the end of the day, this tune is a lot more spread-out musically…kind of moseys along…it’s got energy and it has that lighthearted approach to the blues that worked for Willy And The Planks earlier…still a solid tune.  One of the shortest cuts on the record, you can hear the guys are into it just as much as the rest…they play it well, just a bit of a sleepier cut by comparison to the rest I guess, that’s what I’m saying there.  But where there’s a lull in energy, you can usually best bet that it serves to amplify the track to follow…especially at an album’s end…

Adding in a bit of energy and a lot more soul, Willy And The Planks bring the album home in fine fashion with a smooth stroll through their final cut, “See That My Grave Is Kept Clean.”  Lyrically, this is my favorite of the bunch…they’re still keeping it simple but executing so well.  Mark Noble is letting it RIP on this final track vocally…by far his most engaging performance right here at the end and he’s had a good run the entire record through.  It’s like the singing-equivalent of backing up to take a full sprint towards something…you can hear Noble get more and more inspired with each line of each verse and the power of his voice increases right along with it.  Guitars have great character and personality to them, drum beats are subtle, on-point & crisp…the bass keeps the rhythm rolling right along smoothly in a highly accessible and inviting groove that takes its minimal ingredients for a real ride you’re certain to dig.  “See That My Grave Is Kept Clean” closes the record with clarity and rhythm, keeping the most captivating aspects of their music on full display and leaving us with a completely favorable impression of what Willy And The Planks are all about.  These guys were into it and having fun – as result, so was I as a listener; they put in the passion in skill and got themselves right into each moment for every song on the record and that’s pretty much all we can ever ask right?  They’ve got a great grip on their soulful approach to the blues and what appears to be a genuine want to truly entertain you – so let’em!