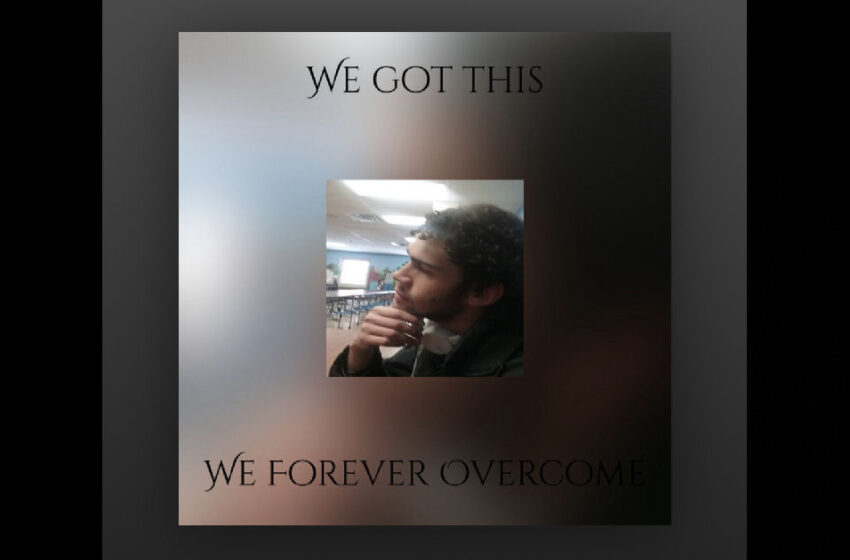 There’s a lot of opportunity and potential here in what We Forever Overcome does…it’s just a matter of puttin’ in the work from here to enhance the positives for sure.  This single “Progression” I’ve got here in review comes from the debut EP called We Got This, released last year…I can hear things that’ll work well in We Forever Overcome’s favor when it comes to the masses out there listening…and just like any project, artist or band this early on into their career, I can hear multiple points for things to sharpen up.

While it sounds hazy & faded on the mic, generally speaking, it’s on-beat and fits with precision.  Couple moments here & there where dragging a syllable affects things a little, or adding one more might have given it the fluidity it has in the rest…ultimately, I ain’t really complaining too much here – a lot of the delivery here & the way the energy is presented is intentionally stylistic.  Whether it comes across with the slickness & accessibility We Forever Overcome is intending might be another story…I’d argue that “Progression” might be a bit too dialed-back to make the lasting impression it would need as a single.  It is decisively different than so much of what you’ll find out there, which is always a positive…sometimes it just takes time for the people to catch up to what’s being laid down, sometimes an adjustment is required.  That’s all up to We Forever Overcome of course – I ain’t here to lay down judgment so much as I’m here to relay what I’m hearing…from there, you lump it in with what others have said in the past, find some sort of general consensus between it all, and decide what you wanna do with the information for the future going forward.

For myself personally, there’s a bit of sparkle and shine missing in the production that dampens the brightness of this vibe’s potential, just enough that when combined with the hazy energy We Forever Overcome is putting through the microphone, that it all feels boxed-in and capped via compression a lil’ too much to have that life in its veins that a track with the lyricism and theme of “Progression” should perhaps have to pack in that extra punch.  When you hear how the low-end beat kicks-in for the chorus hooks, you start to understand why things are the way they are mix-wise – that’d be one beastly sound to try to wrestle under the red-line from the studio boards; don’t get me wrong, it’s a challenge for sure.  As it is right now, it’s still so big that it’s got everything shrunken in behind the beat – “Progression” ends up being a beat-dominant tune as a result of what occurs when the hooks appear, typically where you’d find an emcee rising to the top of the mix to get those very hooks across for all they’re worth.  And in this case, I’d also argue that those hooks could be pretty addictive were they able to have their moment in the sun as they should…right now the mix is just a bit too grey to get the full dose of their power across.  So again, it really just depends on what We Forever Overcome is going for – the words come across clearer in the verses…content-wise it’s strong…lyrically it has clever ideas and a stream of consciousness-like flow to let these thoughts wander from the mic into the beat & into our speakers – like I said, there are definitely positives to work with.  Even the music itself, really does stand out when you’re listening to it closely, from the piano-led sample to the effects in the atmosphere that bounce from the lefts to the rights…I still maintain that the low-end becomes a real factor here…a lot of this would stand out that much more without being compressed quite as tightly as it is…but these are the kind of details that get sorted out over time & experience.  We Forever Overcome is just getting all this off the ground with We Got This having come out last year – chances are this project has years ahead to refine the finer details.  At this stage of the game, you wanna hear uniqueness, ideas, and something different than the rest offer, and in that respect, you gotta give it up for We Forever Overcome – “Progression” has all three of those elements on display for sure – it actually reminds me a lot of Cunabear from out there in our independent music scene, which is more than cool with me.  You’ll find multiple lines that indicate a real clever mind at work here…the instincts all point to potential that could go on to do something even more next-level each and every time that We Forever Overcome shows up in the future and build a solid legacy over time.  There’s desire to do something different than the rest, and no matter what you may or may-not feel about any one aspect of the song, you gotta respect the ability & potential to blaze your own trail.  Adjust those dials around, test things out, add that extra syllable, take five more away, speed up, slow down, adjust it all again…pass or fail, try new things and see what works – create art like We Forever Overcome is doing, and it’ll lead you in the right direction, every time.  “Victory is mine, just a matter of time,” as We Forever Overcome will tell ya directly…there’s no reason not to take that 100% seriously from what I hear in this cut from We Got This; this early on into a career, the best idea is to stand back & let it expand & evolve at a natural pace…the less my opinion, or anyone’s opinion matters, the more a project like this will wow ya with its own uniqueness.

Listen to more music by We Forever Overcome at Spotify here:  https://open.spotify.com/artist/4li1cAjJYREPgGaSQpOIk9