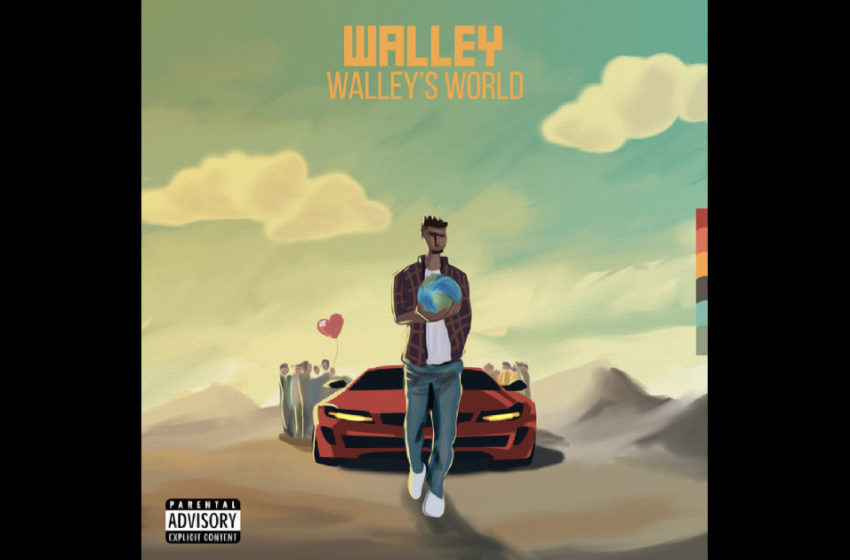 Ayyyyyyy yo!  This is Walley’s World y’all – we’re just livin’ in it.

This dude.  Walley gets it – this is exactly how you start a record and make a massive impact right from the drop – the eerie vibes of “Benjis” haunt the music while the main star of the show pumps out a killer set of bars that have all that good-good personality, charisma, and character you want from an emcee.  With his mind on his money and his money on his mind, Walley opens up Walley’s World with a wild first impression that reveals the finesse & flash that he brings to the m-i-c; not only is the man keepin’ it real with what he wants to say, but listen to the style & swagger he puts into how he goes about sayin’ it all.  Dude sounds like he needs green & paper-stacks the way the rest of us need blood & oxygen!  Walley runs through a badass set of slick references, buzz-words, and sly phrasing that flexes skill and solid instincts on how to seriously entertain – he sounds large & in-charge with massive presence on the mic and wicked hooks for the chorus of “Benjis” that absolutely hit the mark.  The rhythm & style is on-high here y’all…Walley comes out BIG from track one on his new EP and starts crushin’ it immediately with “Benjis” – he’s got a single-worthy vibe right up front on his record here that a ton of people will dig.  Saving one last bullet in the chamber to fire off towards the end, Walley gets an assist from his homie AK, who’ll go on to light-up the bars around the ninety-second mark, adding a whole different sound & dimension to what you’ll find coming from the mic on “Benjis.”  He’s got a short spot to rap it up in, but AK’s clearly got verbal skills you can hear, and it’ll be one of three times he’ll appear on Walley’s World – so while you might get a quick introduction to him here, there’s much more coming.  Main thing I’d say you’ll remember from “Benjis” is gonna be the way this whole vibe clings to your bones with its icy sound and the pure heat coming off the mic in the hooks of the chorus coming with it.  Walley knows that though…it’s a short cut altogether at just over two-minutes long and he starts this track with the hooks as the first thang you’ll hear – which was definitely the right call to make – you’ll get to hear’em several times in a short timespan here, but believe me, each time they come up, you’ll just wanna turn’em up more & there’s like, zero possibility of ever being bored with a rhythmic & hypnotic cut like this.

What’d I tell ya from the very beginning?  This is Walley’s World yo – we’re just livin’ in it.  He’ll go on to prove that theory on “Trending Topic” – which is…well…I mean…this is completely centered around the star of the show, it’s all about Walley here.  “I’m the topic,” as he’ll tell ya direct throughout the hooks of this second cut on his new EP.  “But I don’t need a nine – cause you can get slapped – either or would do, dispose you like a rough draft” – that’s ice-cold homie, ice-cold.  I ain’t playin’ here…any man out there knows there ain’t nothing more severe & savage than getting slapped cold-up…it’s a subtle reference to just how much control Walley’s got over Walley’s World and how confident he is right now.  As for the rest of the lyrics on “Trending Topic” – well…they’re probably a whole lot less subtle overall, you feel me?  Some rappers shy away from their ego, others embrace it as they head for the top of the charts to claim the throne – “Trending Topic” makes it pretty damn clear which side of that fence this emcee falls on – but at the same time, you gotta give the man props for backing up everything he’s saying with pure skills on the mic that would silence any potential haters out there in the mix.  Walley’s energy is solid, he’s amped-up throughout the verses and more laidback to bring out the smoothness in the chorus hooks.  “No real estate agent, but I’ll put you in your place” – like I mean, c’mon people…regardless of what you may or may-not feel about the self-indulgent nature of a cut like this, you still gotta acknowledge the fact that “Trending Topic” is totally entertaining & possesses a ton of money lines.  Walley draws a verbal line in the sand here on “Trending Topic” – be a hater at your own risk y’all.  You “might as well act friendly” lest you wanna get man-slapped and sent hurling to the back of the class – of LIFE.  Believe that.

Dude tells a great story and puts all the right imagery in his words to get the point across – listen to “Ghost” for a perfect example of what I mean – you’ll listen to every word of this twisted tale of love to find out how it all turns out.  Walley is also clearly highly-capable of both the bars & the hooks in his music, making him a certifiable threat when it comes to what he can do with his music, which he flexes to maximum results on “Ghost.”  He might not be able to hide ALL of the heartbreak here, but he’s definitely made a case as to why he’s moved on…you end up feelin’ this one though…a track like “Ghost” doesn’t just appear out of nowhere dear readers, dear friends – this is all coming from a real place.  While he might not “want to move on” – ultimately, he knows that’s the right call here – he’s “on the market” now and I’m sure he’ll have no problem makin’ peace with that as he lines up new digits.  Personally, I really dig this cut…I think it’s a serious highlight on Walley’s World that perhaps reveals more about the man behind the mic than any other track does; I can understand the people out there probably connecting a bit more to the uplifting energy in the first two tracks more quickly – but I have the feeling that a track like “Ghost” is gonna be the unsung hero of this EP.  It’s a slow-burner, but it scorches blazing heat on the way to its intended target; “Ghost” is written with an audience of one in mind, which ultimately can be risky in multiple ways…sometimes the effect is that the situation is difficult to experience because the song is written for one specific person to hear.  So again, testament to the attention to detail and way that Walley writes, because you feel like you’re right there in this situation and get a glimpse of the full story and he gets the emotion of how he’s really feeling across brilliantly here.  Like I said…he can’t quite hide the pain & hurt that still exists, but he’s come to terms with the situation and he’s ready to move on to where he’s appreciated – and like HE said, now he’s the “Trending Topic” right?  I’d say the man is gonna be more than OK at the end of the day.  Dig “Ghost” a lot…it’s a thought-provoking track that’s real AF…Walley fearlessly lets us all in on the inside here.

“Pipe It Down!”  This is a BIG cut – LISTEN to that low-end – just stockpiled with mayhem & menace!  Once again featuring AK in the mix, the two emcees go for a wild dose of serious style on this cut – modern-day as it gets and a set of sounds built for the right here & now, “Pipe It Down” is a low-down & dirty, dank-ass club-cut that’s designed to drop booty’s on the dancefloor like low-ridin 64’s.  One of Walley’s real assets is just how flexible he is with his own style & sound – where so many emcees stick to one type of flow that usually ends up invading each cut somewhere along the line, Walley continually brings something new to each track, which makes listening to Walley’s World pretty damn easy and pretty damn interesting at the same time.  “Pipe It Down” goes for a more club-bangin’ vibe than any of the others have so far…like I said, it’s relevant as it gets when it comes to what people are listening to in Rap right now – yet another direction that this emcee seems to find success with.  It comes down to character, charisma, personality – all these things make the difference when they’re all clickin’ – that’s when it becomes swagger…it’s that sound of confidence when you truly own the moment and you’re feelin’ the vibe, which both AK and Walley definitely are, all throughout the bars of “Pipe It Down.”

The tripped-out sound of the music on the final cut “Madre” is worth the price of admission all on its own.  It’s the kind of track that has you wondering how on earth Walley & AK would have felt like this was something they could work with…it wouldn’t be easy to find your way into a wavy & bendy vibe like this…or at least, I would think that’d be the case – maybe it is easy for these two emcees, they seem to find their way around the bars just fine.  I have a feeling that overall, chances are this particular cut is gonna appeal to a narrower audience than most of the other tracks on this EP, but make no mistake, this is beyond creative when it comes right down to it – complex on another level in terms of the vocal-flow & the music and how these two parts interact together.  So by nature of it all being more challenging, “Madre” is probably the least accessible of the set, but don’t confuse that for it not having anything to offer ya – Walley’s created a wild hook to go with this, AK’s crushin’ his bars as always, and the overall uniqueness in this tribute to his “Madre” should be more than enough for people to find their way into it.  You won’t hear too much out there that goes as far in the psychedelic side of Rap as the sound of “Madre” – like, audibly, the odd sounds floating through the atmosphere from the lefts to the rights are a complete trip and 100% badass to listen to.  Walley’s bending space & time on Walley’s World at the end of this EP, with AK backin’ him up as solid as ever – these two work well together.  All things considered though, facts are facts, this entire EP has had a ton of entertainment value and wildly unique vibes from track to track…I dig that this emcee is more than willing to try a whole bunch of different approaches, styles, and sounds…and it’s obviously even more encouraging that it all comes out as strong as it has.  Walley’s got a lot to offer the game and designs killer hooks – don’t get caught sleepin’ on this emcee and make some room on your playlist for Walley’s World.

Listen to music from Walley at his official page at Soundcloud here:  https://soundcloud.com/walleyszn