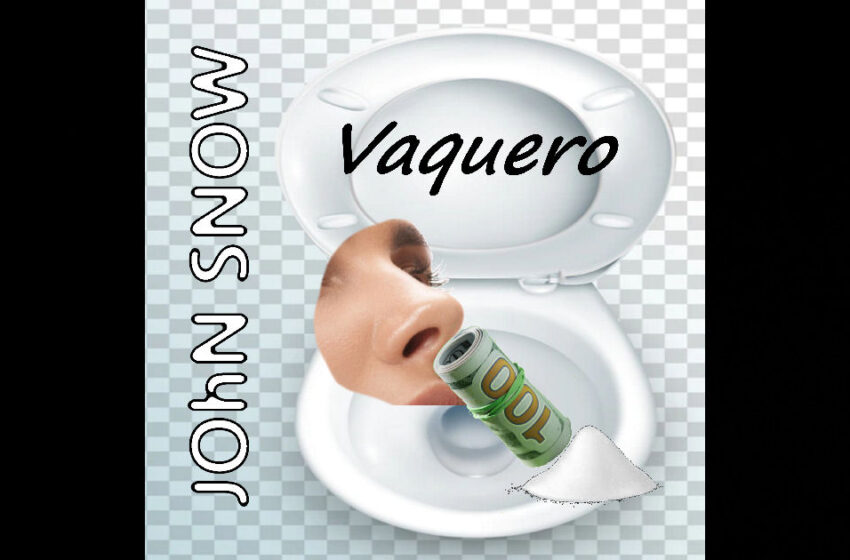 “Twenty-five on my third wife…”  Yikes.  That can’t be cheap.

Welcome to the world of Vaquero…this dude sure ain’t afraid to get grimy with it.  All-in-all, he’s an artist that seems pretty determined to write rhymes that’ll have you raisin’ an eyebrow or two when you listen, making you wonder if he just said what you think he said…and spoiler alert, fuck YES, he did.  Whatever the most extreme thing is you think you heard, I guarantee, that’s exactly what you heard.  Like…for instance…when it comes to his single “JOhN SNOW,” I could have just as easily started this review off with one of my favorite lines from the main hook, where Vaquero raps out this verbal gem:

Now…I know what you’re thinking…a line like that might…hmm…not be the most intellectual thang you’re gonna hear in the music you’re listening to today, and it’s clearly designed for shock value, right?  While I’d probably agree with ya on the shock value part of the argument, believe or not, this dude is stringing together smart bars that are pretty much guaranteed to get your attention.  Look at it this way – I rarely quote artists/bands on these pages of ours…yet the words this dude is puttin’ into his music deserve the extra attention, because YES…they might be RUDE AF, but Vaquero is fuckin’ clever too.  I ain’t even remotely lyin’ to ya when I say I burst out laughing in this room where I write on my OWN, out loud, right in the middle of the day with no one else home, just listening to the hooks of “JOhN SNOW.”  But that’s exactly WHY they call it “shock VALUE” y’all – because this kind of writing can completely be VALUABLE, you feel me?  We ALL notice the kind of rhymes he’s busting out on this Trap-infused vibe – it might not be music for your momma (unless she’s nasty…in which case, please have her call me up) – but as far as what’s relevant & what the people are actually listening to…hellz yes, this song qualifies.  The beat’s tight, the words are definitely going to get notices, and Vaquero himself has a metric TON of personality on the m-i-c…ultimately, whether or not you like what he’s got to say aside, these are all the right ingredients to move forward and carve out a permanent home on a whole lotta playlists out there.  I’m here for it…I ain’t claiming to be the most mature dude you’re ever going to run into, so there’s that to consider – but if you ask me, Vaquero’s not only highly skilled, but this dude’s seriously funny too.  Think about it for a moment – when was the last time you heard “the doo-doo bowl” being referenced in ANY song, am I right?  It’s probably been a minute…like I said, welcome to the world of Vaquero y’all.

So…obviously there’s an argument to be made that it’s not exactly going to be the most progressive song you’re gonna hear this year, and I get that – so does Vaquero, so lighten the fuck up for a minute will ya?  You CAN take him entirely seriously if you want to, and if you do, chances are he’s got more than a few lines that are gonna piss you right the fuck off for the typically misogynistic observations that tend to show up in a lot of Rap’s music history.  You CAN go that route if you want to, and if you do, consider yourself caught in Vaquero’s web…again, I invite you to consider what real shock value is all about – it’s basically the entire set of opening bars on “XXXTRA THICCC” altogether, and the vast majority of the song itself overall really – he’s written this to get your attention, and it’s always going to be up to YOU as to how much oxygen you give him, or how much you wanna fan flames like these.  All I’m sayin’ is the dude’s creatin’ a verbal firestorm here…content-wise, and with the fierce flow he’s rockin’ with too.  To be entirely fair to the man, his second verse proves he’s at least a LITTLE bit pro-woman, you know what I mean?  “My girl is perfect, everything she got, she deserves it…” – and while that’s about the closest you’re gonna get to anything indisputably positive in the words of “XXXTRA THICCC” – again y’all, don’t let Vaquero just pull you in and make ya mad – you’re supposed to be in on the joke and laughing along with him.  If you’re not…hell…honestly that’s pretty much on YOU ain’t it?  We all get a choice in how we respond to shock value…I’m pro-woman in every sense of the definition, but I ain’t even remotely lyin’ when I say Vaquero had me laughing throughout this entire single for sure – plus…I mean…c’mon now, that hooks completely JAMS too.  We don’t HAVE to take life so freakin’ seriously all the time, and one single song doesn’t mean the whole of society is going to start collapsing around us either…so when Vaquero raps out “you don’t fit on my jet-ski…cut you up, you’re a manatee” – don’t go overboard with how you respond, or like I said, you’ve fallen right into the trap of shock value done RIGHT.  Besides…if you’re really paying attention, you can hear that Vaquero is HERE FOR IT…if you’re “XXXTRA THICCC” all the way to three Cs…he ain’t shying away from the challenge, he’s busy tryin’ to get them digits as quickly as he can, comin’ over to the crib with champagne in hand, you dig?

Obviously it’s gonna be a tough grind to get a song like “XXXTRA THICCC” OR “JOhN SNOW” onto the radio, but I can’t imagine Vaquero gives a fuck about that, nor should any artist out there really.  Do what you do, say what you say, own your shit, and the people out there will find ya…there is literally an audience for everything out there on the internet in some way, shape, or form – and YES, Vaquero’s got one waiting for him too.  Artists like this guy, that ain’t afraid to get wild with the lyricism…I mean…it’s obvious that a mouth like this is gonna get him in copious amounts of trouble in all kinds of ways – but by the same token, Vaquero’s a great reminder that not everything in life needs to be so damn serious all the time…that music’s meant to be fundamentally about entertainment, not just socially progressive causes…and in this particular instance, that the “XXXTRA THICCC” need just as much lovin’ as we all do – or at the very least, as much as your momma does.  Humor is an effective tool in music, shock value is too – Vaquero gets it.

Listen to more music by Vaquero at Soundcloud here:  https://soundcloud.com/c-vac