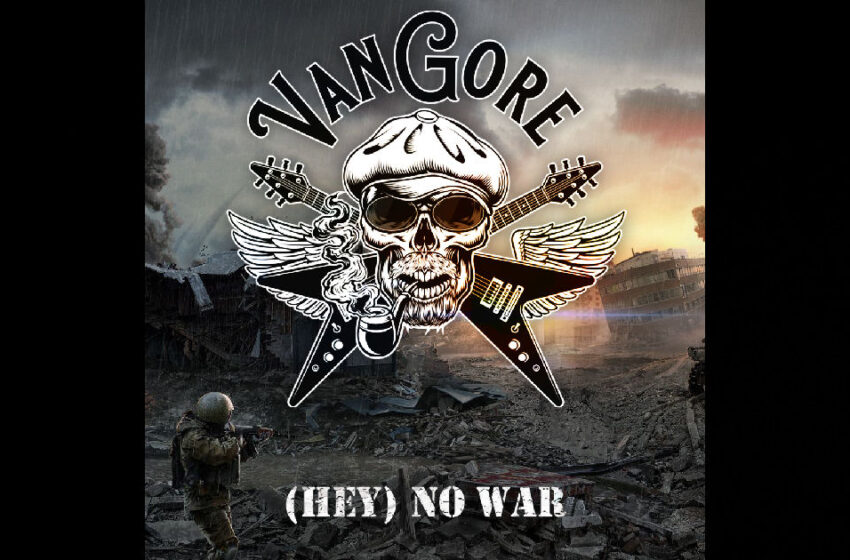 “No war’s worth dying for.”  #NowThatsSomethingWeCanAllAgreeOn

By “we,” of course I mean US…the people…there’s hardly ever been a person in your life that you’ve met that has ever been PRO-war, if ever – am I right?  So “Scream!  Hey!  HEY!  NO WAR” – because unless you’ve got some kind of sick & twisted stock portfolio that goes up once the shelling starts, you’re just like the rest of us and looking for peace to be the dominant trait on this planet & shared amongst us all.

Inspired to be the response to the current ongoing war between Russia and Ukraine, VanGore sprang into action and fired up the amplifiers instead.  Armed with major guitar chops and screaming the message as loud as can be, this collaborative effort yielded an anti-war anthem that will echo on long past this recent conflict and likely carry straight on into the next for generations to follow.  From the opening siren-call to the gripping way this song is both played and sung – the resounding spirit of resilience is bound to penetrate behind enemy lines and reveal how the people are tired of absolutely everything to do with wars they want no part of.  Smartly revealing the sentiment onscreen on the video with scenes of blood money, chess pieces soaked in blood, and old-school footage of wars that have long been fought in the past scattered in amongst crowds of people that are currently protesting the unjustified attacks experienced around the globe – the imagery is as effective as the song is intense.

VanGore’s message shows the real power is with the people – and to prove that even further, the song itself is sung by a Russian-born singer with the cojones & courage required to “speak out against war in a country where human rights are not quite on the top of the to-do list.”  Confirming that art & music are always at the ready to take a stand against societal & social injustice at every opportunity, VanGore has taken the battle straight to the screens & speakers with the official release of “(Hey) No War” this year.

We’re all about it – and once again, by “we,” I don’t just mean us here at sleepingbagstudios, but all of US around the globe, united by our anti-war stance.  The quicker we recognize just how pointless every bullet is, and how vitally important every LIFE on earth is, the better off we’ll be as the tides turn from those in power, returning it back to the people where it truly belongs.  VanGore’s done the right thing by standing up at a time where it’s needed most – and hopefully, this band is among the first of many that will do the same…because the louder we all “Scream!  Hey!  HEY!  NO WAR” the quicker those tides WILL turn, and when the powers that be recognize that PEACE is what we really all want, and that their money is worthless in comparison to the lives we lose in times of war, the better off we will finally be.

I salute VanGore for standing up for what’s right, and encourage you to join them in the fight for peace.

Find out more about VanGore from the official links below!