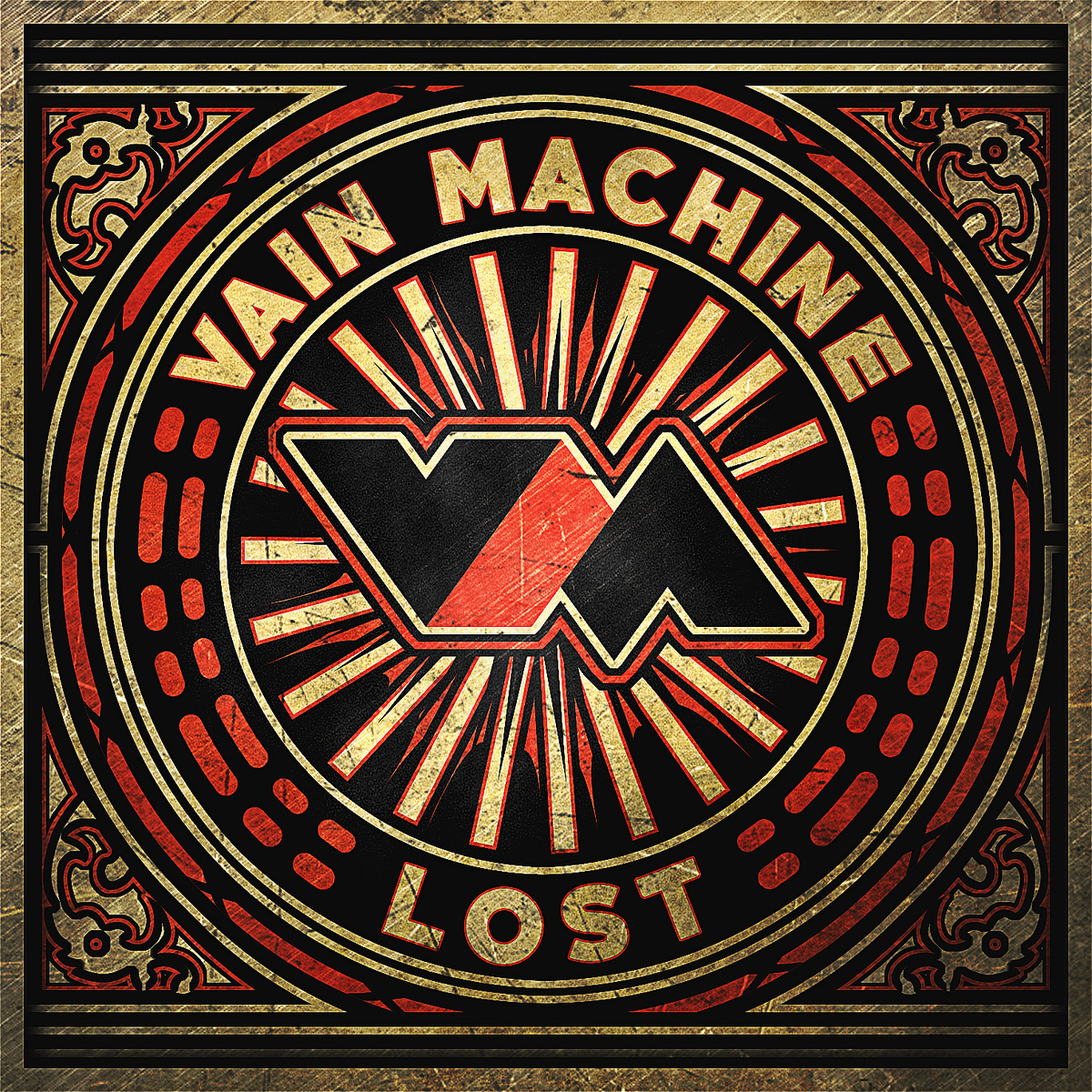 Honestly, I’m kind of surprised that more people don’t adopt a sound similar to this; there’s really not too many, and I suppose there are even less that pull it off well. With a blend of electro-infused industrial/post-punk music, Vain Machine often sounds like excellent bands from our music-history like Depeche Mode at their most darkly-melodic times, and at others like the more aggressive sides of that genre pulsing away with intense beats, glitches & switches like you’d find in Orgy, KMFDM or perhaps even Nine Inch Nails. It’s an onslaught of BIG sounds coming at you in immaculately-produced stereo-sound; strap yourself in for a ride whilst I dissect Vain Machine’s new album Lost.

For starters…this impressive, all-encompassing sound is coming from only two people; Beau Baker and Omar Quinones based out of Los Angeles. Aside from good ol’ Reznor, they’ve beaten the odds by creating massive music & sounds that are completely comparable to that of a full-band easily.

Lost starts out with a very KMFDM vibe to begin the album…low-end pulsing in a menacing way, the opening song and title-track “Lost” is full of barbed-hooks designed to capture your mind & musical-interest immediately as it comes ripping out of the gate. The chorus becomes a real display of intensity and the groove of the verse coming back in is quickly addictive; this is definitely a sound that excites my earholes and a great opening to my experience into the music of Vain Machine.

Breaking way to a calmer-electro style, “So Much For Fate (All For Nothing)” is much closer to something you’d find on Depeche Mode’s Ultra or Exciter albums. There’s an undeniable pop-meets-new wave groove that beats just below the surface of this musical-mayhem that pulls you in every single time and “So Much For Fate” is no exception; it’s the example. It’s an excellent combination that has seen crossovers like Orgy find massive success through singles like “Blue Monday.” Listening to a track like this…there’s no doubt in my mind that these tunes could just as easily find their way into the dance-clubs as they could be found pulsing deeply within the underground circuit. There’s a lot of crossover potential in a sound like this…aside from the dark-mood of the music which some people either will or won’t respond to, there’s just far too much to like about the rest.

“Strike The Wire” might remind you more of something like you’d find on Pretty Hate Machine by Nine Inch Nails, though the vocals still retain their Gahan-like qualities. There will be times that sound like they trade in energy for tone vocally…but that passive sound was a real part of what made the post-punk sound so unique. Echoing those sentiments here in the present…it’s effective and it works well…but there are times where I do find myself wanting that energy to come up just slightly through the vocals to pull me into these hooks just a tiny fragment more.

Because let’s face it…musically…assembly & structure-wise…these guys are all aces. Listen to the opening of “Fade Away” – it should be all you need. I absolutely LOVE this song and sound…this is the intense slow burner that a guy like me absolutely longs for and always hopes might come through the speakers. I was honestly shocked to hear this one remain instrumental; I think it’s a brilliant canvas for a singer to work with and massively dynamic. I also think it was a great choice. I personally have no issues with the vocals in Vain Machine at all, but this really does display another side of them. And a fantastic side of them at that; this electro tune has all the melody, intuition and tones that I pretty much EVER want to hear in ONE song. Genius cut. Without words, it’ll be more difficult for those that like to sing along to get into…but man are you doing yourself a disservice if you’re not giving this track a copious amount of your time of day.

Hitting a lighter-stride in a track that sounds like Orgy-meets-NIN, “X-Ray” is definitely a cut designed to make you move. Feel sorry for ya if you got this song on your ipod whilst in the dentist’s chair…you’ll be getting a few extra holes in your face if you’ve got “X-Ray” on, dancing in the chair while they drill ya. Other places would be just as inconvenient I’m sure…probably shouldn’t be listening to this while sitting in the jury-box, at funerals or while trying to stay angry with your cable-provider…and I’m sure the list could go on. So fuck all that…bust moves where it’s safe in the middle of your own home with this massive-mover as it grinds out a solid beat and excellent vocal-hooks.

“Broken,” made me a little suspicious and here’s why; it’s actually on the album three times. From my outside perspective…it could mean a couple things – what I’m expecting is the track they wanted to get ‘right’ the most, hence the inclusion of other attempts/remixes that might suit the song better. That usually means there’s a lot of important lyrics packed into the song…a message that’s truly trying to be communicated; have a listen…you decide if you feel I’m right about all that.

As it stands, the first mix is decent and there’d be no reason to be unhappy about it. I’ll admit that of the six tunes that start this out, this might be the most difficult one I’ve found to find a way into. The chorus on this one is delivered with a vicious anti-energy…I personally think this one needed a bit more spark in the energy to make it stand out that 10% more. It still has the hooks, the writing and the creativity to merit its inclusion for certain; it might just be me that wants more while they remain true to their style without compromise.

Technically the album’s originals end at the next track “Push,” another excellent atmosphere created by Vain Machine with great ideas for vocal samples piercing their way through the intense up-tempo beat. I think the vocals match perfectly here in this final track, raising up with the dynamics of the music or settling into melodies that echo into the tone of the music creatively & innovatively all the way throughout. Excellent electro-pulse in this final cut and overall, seven songs I’d never find myself complaining about were they to come on at any time here at the studio.

The album rounds out in entirety with additional remixes of “Strike The Wire,” “Broken,” and “Push.” I think each of them brought something new to the mix but for the most part I found myself on the side of the original mixes. Well…except for “Broken;” suspicions confirmed…and I really found that I was digging on the “Assemblage 23 Remix” version of the song. I think it’s a credit to Vain Machine overall to have these remixes at the end come so close to being a part of their sound as the rest; none of these remixes took the ‘band outta the band’ you know what I mean? It sounds cohesive and remains that way throughout the entire experience; they might be Lost on this album but they sure sound like they’ve got their shit together to me!

Have a listen for yourself at the Analogue Trash official page that houses excellent music from Vain Machine and a whole slew of other great talent: http://trashdigital.co.uk/album/lost-at0015