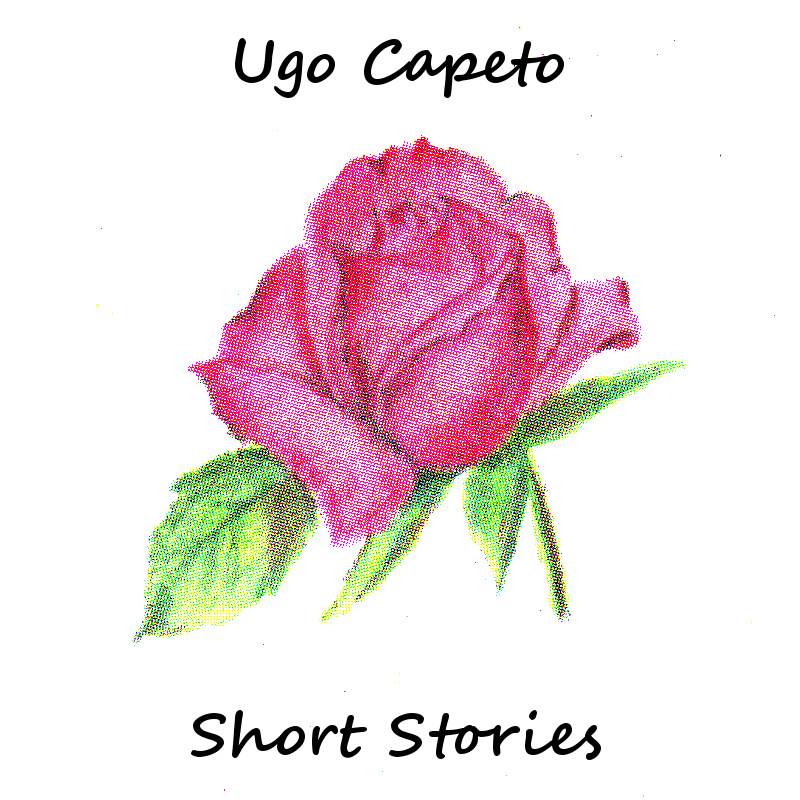 Alright. Simple as this; first person to tell me that they DON’T like this band gets a hard ham-fisted slap to the face without ANY love or good intentions behind it. That’s right – the bad slap. You don’t want that…no one does…

I figure the odds of having to dole this punishment out are virtually non-existent. Ugo Capeto, is pretty damn tough to ignore and impossible not to groove to. If I seem at all defensive today, that’s simply because my one-time studio partner and bandmate Rob would have sent me music exactly like this for me to sing along with. Hearing these wonderfully pieced together electronic and experimental tracks has got me pumped right up now…this is gonna be a great day.

Though the songs on this new album, Short Stories, barely range over-top of a minute in length, their validity in existing is on full display each and every audible moment that goes by. Inventive and creative – as far as I can read Ugo Capeto has actually created these beats from the infamous Fruity Loops studio program and a bunch of free available sounds.

What that means is that this music is coming to you hot off the Ugo Capeto assembly line. And for you people that don’t believe emotions can exist in music made in this method – go have a listen to this new album and recognize you CAN. After a good look over the official site – Ugo has been at this for a while now, releasing several albums full of musical gold this year already. No joke – unless my eyes are buggin out, it looks to be about the NINTH album released for UC this year alone!

And here I thought I was taking on too much trying to release my latest solo project in five years, a double sided disc for a project called The Cellophane Heart. One. One solitary album. And I’ve never felt like such a slacker until I started listening to UC and this album Short Stories.

Ugo Capeto – your dedication to music and to your craft well outshines even my own. Congratulations! At the time of this review, I’ve recorded well over 600+ songs with my instrument or voice on it…in my entire life, which is a HUGE accomplishment if I do say so myself. And at the pace UC is currently on – that record is going to be broken by them in this year alone.

And if all the music is as good as it is on Short Stories – I’ll happily accept this musical defeat.

I am wondering very much about the evolution of sound here in Ugo Capeto. There’s literally not a single track on Short Stories I would have tossed away – each of these tracks are perfectly assembled – brimming full of LIFE and incredible beats. I’ve heard a LOT of great music that personally appeals to me as of late – but this might be the winner for me, and UC is managing all that at barely a minute per song. When I first started my own musical path over nearly twenty years ago, many of our tracks came out in a similar short but effective style. When you talk about highly-repeatable music – Short Stories is the album you can reference. “Story 03,” or “Story 09” are perfect examples of what I mean; they’re small track with hooks so large that by the moment you catch the beat fully you’re just about ready to say goodbye to it. And the moment that happens…you’ll want to hear it again.

Over time – I found I really DID want to hear those sweet electronic sounds for a longer time period than we were recording them for. Then eventually, we decided that we wanted to attempt to add vocals to the sweet electronic rhythms we were making, which led to me grabbing the mic officially for the first time in my life. Couldn’t sing then, arguably still can’t now – but we evolved the sound even further with the additional time into the tracks and developing them as full songs with lyrics. And that’s not to say they weren’t “finished” tracks before that stage – cause hell yes they were – but after finding our own limitations in what we had available to use for instrumentation and this was the best route to go for us. Even if we didn’t have a real singer – we found a way to use my voice as another instrument.

After a bunch of thorough listens to Ugo Capeto’s latest here – I can only imagine where these sounds will go over these next several years. The possibilities are completely limitless, with a work-ethic to match the creative process. The FL studio-program is such a well put together, user friendly and amazing sounding tool to make effective music. But even as well-thought-out as that program IS – it still takes an incredible amount of time, effort and skill to come out with a result as stellar as what you’ll find here on Short Stories. You could listen to 1000 albums made from the same studio-suite and never come close to the precision and quality that you’ll find on this new album.

So….where DOES it go from here?

That’s one question I really can’t wait for the answer for. I’m beyond excited at the idea of anything coming across this desk from Ugo Capeto now that I’ve heard the latest album in full. I want MORE. Lots and lots more…

…but if my math and research are both correct here…you’ll never be waiting too long for that next album of brilliance from Ugo Capeto. For now – go spend FIFTEEN whole minutes of your day in electronic bliss and take in some Short Stories to brighten up the long one you’re actually living!

Find out more about Ugo Capeto and check out some of the amazing back-catalog as well right here at the official page: http://ugocapetomusic.blogspot.ca/