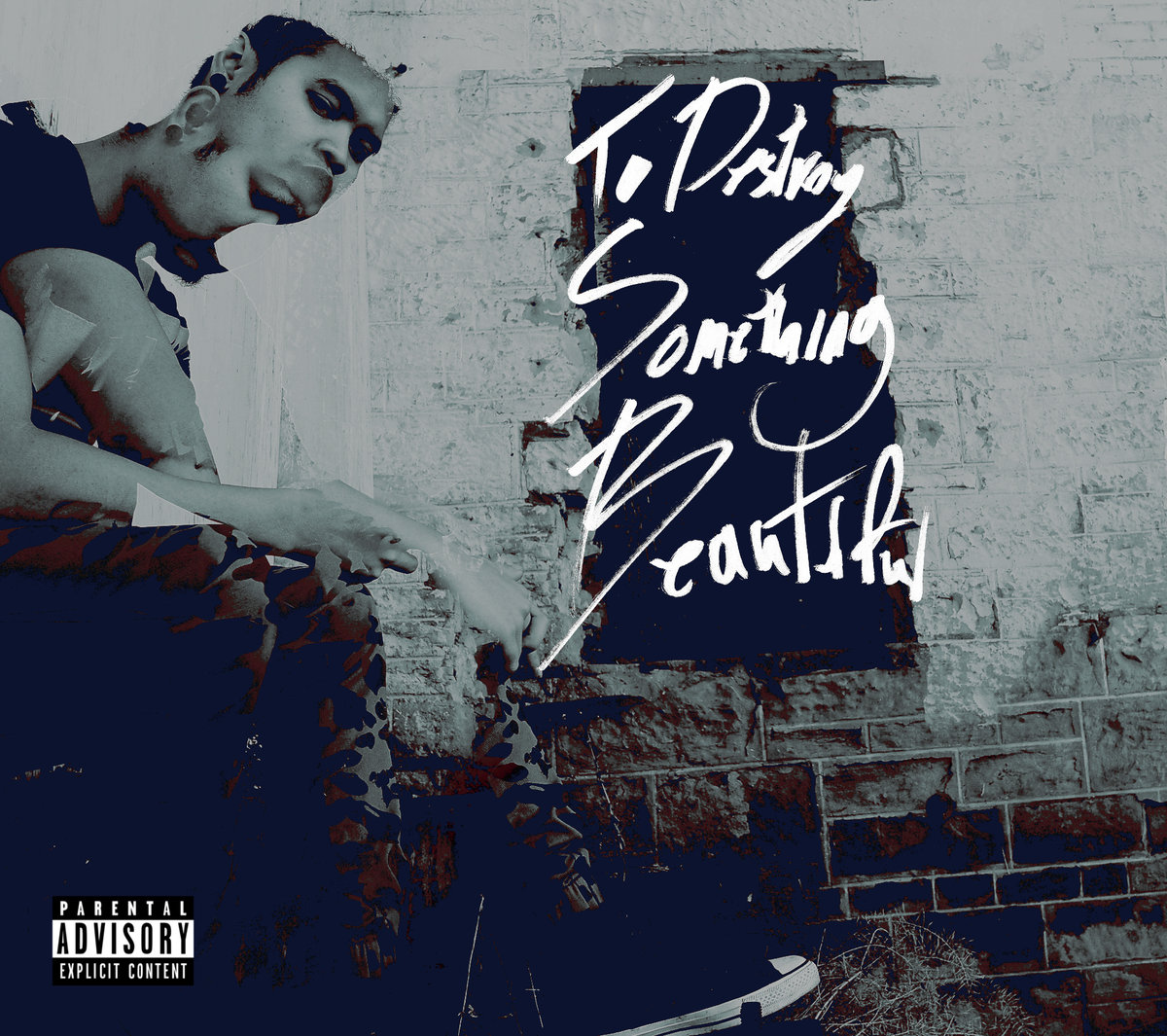 Smart stuff from Twizzie…there was something impressive about the flow immediately found upon the new album To Destroy Something Beautiful as the first track “Party In My Name” came busting through the speakers. It might have been the lyrical content…the subject itself…I was digging the posthumous aspect of examining what might happen after we pass-on from Twizzie’s perspective; now I’m kinda hoping for the same thing…that when I go that people “Party In My Name” and celebrate the life OF. And I think if anything…that’s the tone that Twizzie sets on this record…it’s one that reflects the approach, drive and determination that holds nothing back…and if he went tomorrow, he’s given everything he could to his art & craft…and something like that IS truly cause for celebration. The beat is subtle, catchy…and the ending leaves this first track on a brilliant note.

“Unstoppable” actually reminded me more of Fort Minor and what Mike Shinoda’s been doing in his side project away from his time in Linkin Park. That being said…Twizzie gets more than lucky here as I’m a big fan of that side project…and what he’s doing here packs the same punch through the lyrics and delivery…it all sounds massively-confident and consistently on rapid-fire. Twizzie attacks this one from the lefts & rights of your speakers, delivering line-after-line overtop of a brilliant sample that keeps it simple, but entertaining. It’s like…a bizarre synth-organ…or synth-strings…not sure really what makes the magic in this music, but it works perfectly to set up Twizzie and he goes on to slay this one from moment one to the time it ends.

Taking a moment to really add some humour into the record, “Weakest Link” might just be a ‘skit’ – but the guy that is doing the main vocals in this spoken-word…and the tone…the enthusiasm in which he goes after Twizzie is just far too funny and convincing. Self-deprecating for a moment and taking a time out to have some fun with his own reputation – I love it when you can tell that an artist doesn’t take themselves too seriously through their music-career. It’s important that you have that second-gear if you ask me…someone like Twizzie can clearly hit the switch and immediately head back to the ultimate levels of professionalism and dramatic-vibes to leave the humour behind when needed. He will as he heads into “Still Sick” and takes a logical progression from the point made in “Weakest Link” to the points he’s proving on “Still Sick” and throughout the rest of the album with his dedication to precision, uniqueness, style & flow. “Still Sick” has a darker, more tribal, more raw vibe to it all…but the emphasis from Twizzie on the syllables in his rhymes puts it all in perspective and all the sounds in the right place for one helluva combination and overall result.

There have been a few guest stars as well on this record…and they’ve gone on to solidify the opinion that Twizzie is hanging-out with talents of equal caliber and presence. Whether it’s been MissFudge on “Party In My Name” or the wild-flavours that Rubix adds into “Robin Padilla” these players have added quite a bit of extra-punch into the music of Twizzie without ever overshadowing the star of the record. “Robin Padilla” is a great example of a combination and collaboration of talent coming together over an old-school beat…nearly in the vein of something Cypress Hill would look into back in the day when they were taking “Hits From The Bong.” Great smooth bass-line and mix throughout “Robin Padilla” and the subtle latin-dimension/layer to this cut gives it all the uniqueness to really pop-out, standout & shine. Definitely a solid jam, and it ends on a supremely rad sample before heading into the twinkling music that supplies the thoughtful & dreamlike atmosphere on “Forest.” Maybe a couple of tones that need a slight tweaking in the hooks of “Forest,” but overall I appreciate it when an emcee attempts to do it all like Twizzie is…I think that’s respectable and the effort on this cut surely is as well. The verse is a twisted-up, thought-provoking set of lyrics with a complex rhythm and flow that Twizzie goes after and conquers with ease. The hook in “Forest” has that laid-back feel in its chorus…I think it’s extremely close to where it needs to be…but maybe not quite there overall; that being said I think it’s the right idea and written strongly…another rip or two on the mic…maybe a little more backup in the chorus or something like that and “Forest” becomes one of the strongest tunes on the record instantly.

When you really get into the music on this record though, you’ll easily hear just how innovative these beats really ARE. Listen to “Shh! Boi” – a track that is really about causing shit and getting ill everywhere you can…and about how you can certainly rely on Twizzie to supply that additional mayhem & mischief everywhere he goes. But the music itself…you’ll notice the big bass-swell rising and falling to the pulse of the subtle beat…cause it’s right there and easy for the ears to grab; but seriously – take notice of just how genius the rest of this stripped-down & dirty beat IS. The pulse & rhythm that is being rhymed-over is one of the most unique I’ve heard someone set some bars of verse to…an extreme pleasure to hear innovation like this and Twizzie’s confident approach to the mic makes every beat spring to life.

To Destroy Something Beautiful continues on with the wild, crazy and aggressive lyrics and dark, back-alley beat of “iHATErap.” Definitely another highlight on this record and from his efforts for sure…the sheer pointed direction of “iHATErap” will have your full attention. Calling out the weak rappers of our planet en-masse…Twizzie demonstrates through his performance and words just how much he’s ready to take the number-one spot by force if necessary. To make his point…he’s not in this part-time…he’s ready to make those chart-climbs and be recognized for the genuine skill, effort and passion he’s putting in as opposed to our modern-day culture of creating celebrities overnight that have no chance at longevity. There have been a lot of highlights and reasons to like this record…but this might have been my number-one reason to dig-on what Twizzie has been doing here…”iHATErap” is brilliant and right on-target and on-point.

“You Mad Bruh?” has another guest-star pop into the mix to make some impact on us…and Bobby Blast’em steps into this track which is laced with both humour and serious intensity after a quick piano-intro breaks-way into a widespread atmosphere and emcees fearlessly gripping & spittin’ into the mic. Another great combination of the big bass-swell and tight drumbeats…I’m just as much a fan of the music on this record as I am of the vocal-performances…there’s truly a lot happening even in the most subtle-moments and the mix has been completely wicked for its sound and overall versatility. Twizzie sounds like he juiced for two-months straight before they recorded “You Mad Bruh?” – the extra depth to the growl and aggression on this cut is audibly something you’ll hear, you’ll recognize & you’ll notice.

Taking the time…in general…is something you can notice is different in this emcee. Truly embracing the acronym that started it all…RAP…true rhythm and poetry are on display all throughout this record, but perhaps nevermore-so than on “Unpleasantville” featuring Nillie. First of all…fantastic sample to work with – but also, these two emcees really embrace the poetic-nature of rap/hip-hop music as they spit flawlessly but thoughtfully into the microphone. Definitely some of the tightest lyrics on the album and one of the strongest musically…a huge win for Twizzie late in the record with “Unpleasantville.” The extra dedication, time, effort & care put into the lyrics puts these guys paired flawlessly with the metering and really allows the words to be heard and make their intended impact.

Ruby Ibarra stops by to lend an assist to “Kayumanggi” while Twizzie winds, weaves, ducks and jabs out his lyrics throughout another inventive and innovative beat that really shows the creativity still-flows strongly here in the late-stages of To Destroy Something Beautiful. Excellent up-tempo and uplifting, empowering-vibe to “Kayumanggi” – and just before three-minutes in, Ruby shows up to provide a strong female lead-verse and rips through precision-rhymes with a fierce tone and approach. The chorus hook has that laid back feel where the tone is right on that edge & fine-line once again…but that’s a very notable aspect of modern-day hip-hop…not sure who’s ultimately responsible for it, but it’s definitely something that’s used effectively and often throughout the genre. I think something about it…something in that natural sound & approach makes it all relatable to us…or at least more-so.

“Succubus” brings in the big-bass to dominate the rhythm and sound overtop of stuttered-shots in the beat that keep this second-to-last-cut intense, dark, isolated and charismatic. Much like the approach that Eminem has to the microphone in the sense that the anger, passion, excitement or straight-up rage can light-up and ignite like wildfire within Twizzie at any moment – it’s that loose-element of will-he/won’t-he that keeps you guessing throughout “Succubus” and makes it work so well. Though I can hear it might be one of the least accessible tunes on the record for most sets of ears that would listen to it – I can also hear that there is an incredible depth to the performances on To Destroy Something Beautiful…Twizzie is fully-committed to his music & rhymes and ALL that determination and effort translates smoothly into our ears. He’s put in the work…and now we ALL get to enjoy it. “Succubus” is the kind of track that might not grab you on those first listens…but it’s also the kind of track that survives year after year as a solid & reliable song that grows your attachment to it the more you listen.

Ending on a slightly menacing and mischievous-tone…the atmosphere in the final track “Live.Love.Learn.Die” is a fantastic way to end this record of audible-triumph off on the right notes. Excellent guitar and bass that are put into the music on this one…haunting and somewhat creepy in their sound and samples…it’s another diverse-sound to this album that has yet to be displayed – Twizzie is making big-moves right to the end To Destroy Something Beautiful.   “Live.Love.Learn.Die” puts it all on the line through its incredible mood & atmosphere…and Twizzie REALLY puts it all on the line as he ends the album a-cappella/spoken word and really takes that poetic-side of himself and the genre for one last ride right to the final seconds on this album. Huge fan of what Twizzie has pulled off on this record…he’s really put everything into it every step of the way – and that effort is something that certainly works well in favour of my ears – no doubt it will work for yours too, big-time.