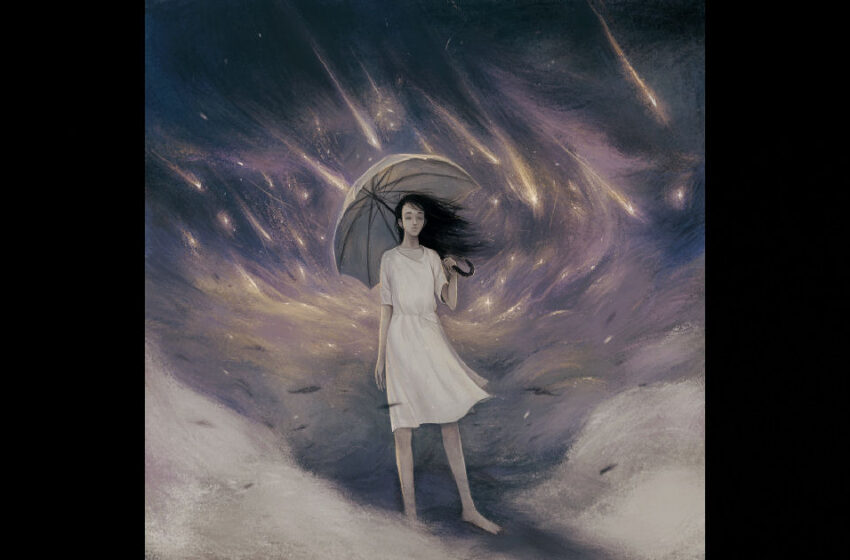 I mean…it’s one of those things right?  I have to kind of hedge my enthusiasm here somewhat…like, as in, how would YOU feel if people all around the world were like, “YES – I’m completely STOKED that you got your heart stomped on so that you could make this song I like so much!”  Then what?  “Thank you?”

That is kind of how it goes though, ain’t it Dave?  We put ourselves into our writing as a form of catharsis and the next thing ya know, you’ve got everyone diggin’ on the sound of your heartbreak and misery.  Hardly seems like any kind of fair trade…our entertainment for your misfortunes…but that is indeed the life of many an artist & those out there making music in a sincere effort to navigate themselves through the day, or quite often, life itself.  It’s a fine line to walk is all I’m saying…but don’t get me wrong, I like what I hear on this single called “Hoped You Couldn’t Tell” from the new Twelve Days In June album, Anhedonia.  After all I’ve written myself throughout these years, it’d be impossible not to support a tune like this one…it’s pretty much straight outta the mid-to-late 90s, which is eternally gonna be my jam.  If anything, it might be fair to say that I like the writing perhaps a bit more than the song itself, but that’s really neither here nor there…at the end of the day, the results from concept to execution all earn high marks.  To me, this cut from Twelve Days In June was like an amalgamation of so many things I like & all at once somehow…bands along the lines of The Doughboys from here in Canada in their most delicate gear, crossed with something like another even lesser-known Canadian band called Doubting Paris maybe, or bands that real people that aren’t me would know well, like The LAs, or Toad The Wet Sprocket…that kinda thing.  You get the picture I’m sure…you’d still find this band in the Rock section, but the lighter side of it – not so light that it’d drift too dangerously close to the ol’ Adult Contemporary though…it’s still cool, you dig?  It’s written from a genuinely heartfelt & heartbreaking perspective that us dudes that grew up throughout the 90s know very well and continue to connect with to this very day.

Anyhow.  A couple things can be true about this tune right here.  It might not be the most complex you’ll hear this year in terms of what’s involved to play it – but the complexity you want in a tune can still be found through the layers of emotion that go into writing like this song has.  Every time I got to the main hook, I was sincerely trying not to smile too much, because I love the writing of lines like “I know that I’m not perfect.  I’d just hoped you couldn’t tell.”  Like…I mean…c’mon – that’s as bittersweet as a line in a song can get ain’t it?  So it’s like…Dave Hulegaard, the engine behind Twelve Days In June…you wanna cheer for the man’s songwriting at the same time as not cheer so hard he jumps straight off a cliff either.  I suppose what I’m sayin’ is that, he’s writing about very real pain that’s still as fresh as wet paint on a park bench…and as much as I admire the writing & I’m entertained by the song overall, it’s still real sad.

But that’s always been my jam…heck, we wouldn’t have bands like Counting Crows, Gin Blossoms, or Black Lab if it wasn’t for this kind of heartbreak/survival combo…all of which would also bear somewhat of a sonic reference to what Twelve Days In June is creating now & helped pave the way for a tune like this to exist.  Bring on the heartbreak & devastation I say!  It makes for great art & amazing music…that’s the reality…the flipside of one seriously wicked coin that never stops getting turned over anew for someone else out there, and that’ll continue to be the case long after my fingers stop typing here today.  Love & loss ain’t a new subject or a stranger to any of us…but there’s comfort to be found in that as well – it’s the kind of common ground we all share but don’t always speak about in person – so to hear it sung out loud in a song is a fantastic & somewhat necessary reminder that none of us are alone.  Ain’t none of us perfect either Dave…so take that to heart too my brother…but it’s folks like yourself with the courage to sing about their real experiences in life, both good & bad, that remind us how much we have in common.  Songs like “Hoped You Couldn’t Tell” are the kind of cuts that you write so that others are possible in the future…without getting these thoughts, feelings, and emotions out into the wide open as naked, vulnerable, honest and real as they are…well…those next songs might never even come out at all.

This worked out really solidly for Dave and his crew-full of musical cohorts – of which there are many – playing alongside him here to make this single, in addition to the other eleven songs on Anhedonia.  Closure is something we all really need & require more than most of us would ever admit, and it sounds like that’s what Dave’s been truly seeking in creating this new record.  After hearing him sing this song filled with the pain of the past, you can’t help but root for an artist like this to finally move forward from here; and with the quality you hear in this song from the writing to the sound, I’m confident that he will.

Find out more about Twelve Days In June from this handy multi-link:  https://linktr.ee/twelvedaysinjune