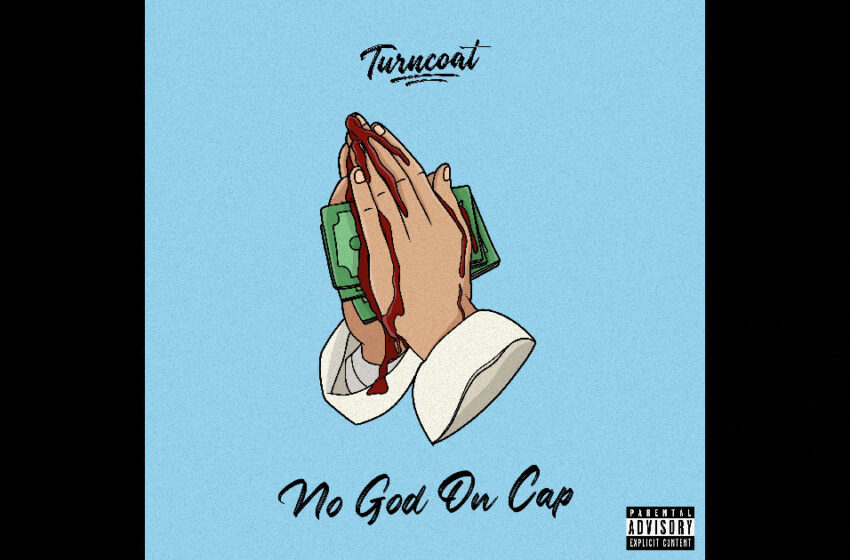 Trust me when I tell ya young thugs…you might think you’re hard when you’re rappin’ about bitches, money, and guns…but there IS a level beyond.  When you’re REALLY harder-than-hard, you’re like our main man Turncoat here – you’re rappin’ about…hey wait a minute…hold up – “Margaret Thatcher?”

No God On Cap is the brand-new record recently released by Turncoat – and YES…believe it or not, the man has penned a track called “Margaret Thatcher” on this eight-track album.  I was trying to figure out what I wanted to listen to at random over these past couple days…I put on No God On Cap and let the “Intro To Me” spin & decided I’d wanna write about this dude after he added in a clever toss to a recent advertisement to Mud that relentlessly plays on every second YouTube video I click on.  Dude made me chuckle out loud with that move for sure…ultimately, I know how that all plays out in the end…eight-to-twelve years now, we’ll all have long forgotten whatever the fuck Mud IS, and we’ll be wondering what it was Turncoat was on about…but for the right here & now, I’d be shocked if I don’t end up seeing that same very ad somewhere in my travels today.  So YEP…this man’s rockin’ with relevance, no doubt.

Anyhow.  Where was I?  Right – “Margaret Thatcher.”  I told ya that “Turncoat goes the hardest” – and if taking on a hook that includes a reference to one of history’s most legendary old white ladies (R.I.P.!), then I mean…what else could prove it to ya?  Alright…so he’s self-admitted to be “goofy like I’m Urkel” and it’s probably best to not take a title like “Margaret Thatcher” as some kind of implication like you’re about to get your education in history through a Rap song, you feel me?  That being said – this dude IS capable of being incredibly insightful when he wants to be…and I’ll fill you in a bit more on that when I rant about a track called “Mr. America” in a moment here.  “Margaret Thatcher” is a lot more loose in terms of its theme…it’s more like a clever place to spring off the beat and create some rhythm in the bars he’s spittin’ as opposed to learning about this figurehead of UK politics, and former Prime Minister.  I’ll say this…you’ll hear this dude’s got the chops to really compete with just about everything that’s out there right now on the radio & your best homie’s playlist.  When Turncoat is in the thick of the flow, this dude is straight-up crushin’ it…the rhythm, the flow, the cadence, the tone & melody – it’s ALL there where you wanna find it, and generally speaking, it’s universally accessible to a large degree too.  For that first minute & ten, Turncoat’s right on-beat…everyone listening will be able to get down on what he’s puttin’ on wax there without a doubt.  Where I think the man’s got some CHOICES to make, is moves like he’ll make right afterwards…he still manages to wrestle his words back to the beat, but he does CHOOSE to wander away from the easy accessibility of sticking straight to it for a moment or two.  It IS a choice…don’t get it twisted – Turncoat gives you more than enough at the start of “Margaret Thatcher” to fully prove he could play this whole track straight-ahead and keep it smooth for the masses – but as you head into that spot between like, 1:10-1:25-ish…it sounds like he wants to add a whole bunch more syllables into the mix than he has space to include’em in, you follow me?  It’s a stylistic choice – and to be fair, it IS something that we NOTICE…so there IS value in making a move like that – the real question is, does the average everyday listener ‘get it’ or do they think he’s wandered off for a moment?  And that I don’t have the answer to…maybe they do, maybe they don’t – all I can tell ya is that when Turncoat’s directly on the beat of “Margaret Thatcher,” he sounds straight-up unstoppable – so to even take a moment away from that punchy rhythm & flow seems like it’s almost an unnecessary risk when across the board accessibility was right there & so clearly attainable.  That being said, hearing Turncoat snap back into it around that 1:25 spot…I mean…the impact of that moment is supremely cool too…it’s one of my favorite moments in “Margaret Thatcher.”  So don’t get me wrong…he knows what he’s doing – I know it, he knows it, most of you will know it too…I guess the question is whether or not he’s potentially overcomplicating a moment in music that maybe doesn’t call for it, but we’ll all probably hear that differently as individuals.  As to how the tip of Turncoat’s dick gets involved here…that remains a mystery…I ain’t opposed to it, but I am curious as to how the tip of a penis is inserted into “Margaret Thatcher.”  It’s a moment that you won’t see coming.  Okay…I’m finished with the penis puns…for now…

…maybe not.  Let’s talk about “corporate penis” and “floppy dicks” on “Mr. America” – which is…just about the most relevant cut I’ve heard this year when it comes right down to it.  Unlike “Margaret Thatcher” – this time around, Turncoat dives straight into politics, taking his (shared) point of view straight to the face of “Mr. America” at a time where it’s needed more than ever.  Grabbing a slice of a sample from The Animals “Don’t Let Me Be Misunderstood” to start this track up – Turncoat immediately starts turning the wheels of your mind, and making his (shared) opinion not only known, but fucking FELT yo.  For real – this dude makes more valid points within 3:05 than you’ll hear on most records.  For the most part, “Mr. America” directly takes aim at the ridiculousness of women’s rights being taken away from them in the US this year, the hypocrisy of that in relation to the whole “my body my choice” fight people made during the vaccination debate and how absent it became when abortion rights were taken away, and in the process, Turncoat takes many justified shots at US politics altogether.  I could quote from this song all damn day and keep us here reading all week – but I’ll give ya one of my favorite lines of the bunch, because it’s the most direct:  “FUCK JOE MANCHIN – are you listening bro?  Or do you only hear lobbyists and grandpas in the capitol?”  “Mr. America” is nothing short of brilliant when it comes right down to it…Turncoat proves to be a force on the mic when he’s focused on a target like this, and I. AM. HERE. FOR. IT.  Listen to the opening lines of this track, before Turncoat has even technically started rapping yet and you’ll get the entire reason that he’s created this track straight away.  I love the tone of his voice, I love the dripping sarcasm mixed into how direct this whole track is…everything about this cut is completely on-point if you ask me.  We need strong voices like this dude has…he takes on the idiocy of religion, the stupidity of politics, the horrors of recent decisions made by old white guys in politics that have no business whatsofuckingever in choosing what women are able to do with their body/LIFE…no joke y’all, I could listen to “Mr. America” all damn day, every day…these are the kinds of songs we need in the world right now.  Art & music always find a way to stand up on the right side of history when we need it to – and what Turncoat is rapping about, is a direct response to how “Mr. America” is trying to flush all the good shit down the toilet.  So consider yourself EXPOSED “Mr. America” – Turncoat has called you the fuck right out – and lest you want this verbal tongue lashing again, it’s probably best you start wising up & making better decisions.  Want MORE for yourself “Mr. America” – you could be so much better than you’ve been.  While one man like Turncoat isn’t going to be able to solve the problems we’re facing on his own, his voice represents what so many of us are thinking…and the more people like this dude that are inspired to stand up against all the bullshit, the better off we’ll be.  I might be Canadian myself, but I fucking get it – I’m a politics junkie outside of listening to music all day & playing with my basketball card collection – Turncoat proves to be a powerful ally that is unafraid to speak up for the voices that are getting lost in a sea of white-man politics trying to drown them out…so in support, I say it’s pretty crucial that we all turn this track UP as loud as your system will take it, and help upend the very system that’s keeping the people we love DOWN.  “You gotta give women the respect they deserve” “Mr. America” – that’s #truth.

Find out more about Turncoat from the official pages below!