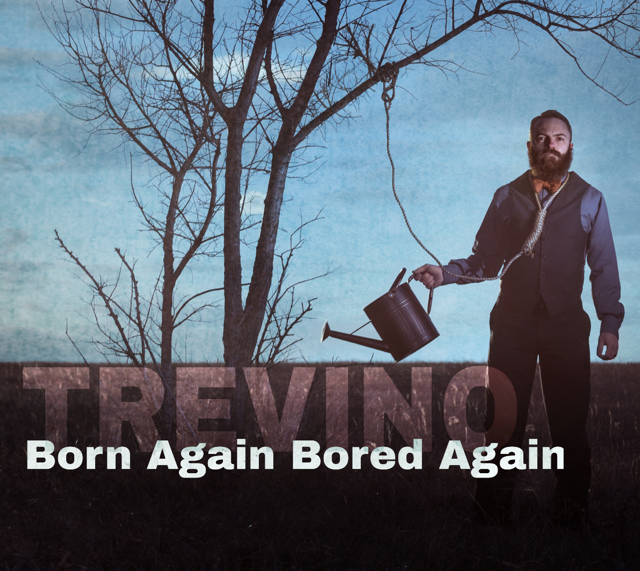 No words. I mean it…NO WORDS. I sat here completely mouth-open as this album started and didn’t even snap out of it for five straight songs; this is by far and away all of the things I love the most about hard-rock/alternative music…a genre I feel I’m infamously tough on. This is nearly like Tool and Panic At The Disco! combined their talents and committed to completely kicking ass. Now…don’t misread this; they don’t sound like EITHER of those bands, Trevino sounds like Trevino and no one else through this unique combination of progressive amped-up rock.

Let’s be honest here – sometimes skill and talent just leap out hard enough from these speakers I feel like I’ve been punched in the face several times. I’m hearing enough talent here on this record to know it can go the distance all the way to the end of the year’s top-10 lists all over the internet. And even THAT’s assuming this band hasn’t been snatched up by the dinosaurs in suits at major labels still looking for anything that remotely resembles Papa Roach, Breaking Benjamin or Chevelle.

Speaking of which…if ANYONE even thinks of comparing Trevino to those turds, send’em my way and I’ll grind them into the meat-matter of whence they came…

And FURTHERMORE…Panic At The Disco! is one of my all-time favourites for their completely explosively melodic music, much the same as you’ll find here on Born Again, Bored Again. Tool is also a favourite of course, for completely and insanely obvious reasons. Nuff said.

After the quick title-track/intro, you immediately get snapped into sweetest drum-roll/riff combo of “Dead Battery.” The trade-off vocals work more than perfectly; I was blown away at the sound of the singing in this band…it’s honestly astonishing. The frantic nature of the sound in the vocals is completely addicting to me…the equivalent of a high-explosive waiting to detonate. Carrying that on strongly into “Stay The Same,” I almost couldn’t believe that they somehow sounded even MORE perfect to me on this cut, but such is the case. What an energy explosion this track is; and the drummer in this band is more than skilled, he’s gotta be a straight-up octopuss. Whether it’s the harder edge you’ll find on “Stay The Same,” or the lighter side of the Trevino sound on a track like “Year,” the drums completely hold the pieces in place with REAL WRITING on the drums! YES – IT CAN STILL BE DONE MY FRIENDS! This lost art of contributing to the songs from the drum throne is completely alive and well, thriving and surviving here in Trevino.

As it rolls along into the second half, I think the only track that didn’t sincerely amp me up as much as the rest of these was “Run-on Census;” which is a solid track, but quickly outshone by the stop-start magic in “Indian Hills,” the track to follow. Again, DRUMS people! Listen to this kick foot! Tom-rolls that will break yo’ NUTS or flood your lady-parts…this track is a musician’s kind of track to listen to; there is far too much to appreciate within this one song.

And apparently…they’re going to kick some ass right on til the end. “Locked Away,” starts out with a wicked, haunting opening. Great TONES in this band…they really have a gift of atmosphere in their music-making. The drop-out at the beginning of “Locked Away” truly sounds incredible and really audibly clears the air when it comes to production; these guys clearly know their sound & their shit.

“Morrisville!” That’s the damn name of the track. I need to get my eyes checked. But seriously…look at this title on a slight-angle…I thought it read “Momsville,” and who doesn’t want to go there? Anyhow…I need better glasses, clearly; just thought I’d mention. Whatever they want to call it, they’ve got themselves a nice energy build-up here in this track before they once again take it to a level beyond in the track to follow, “Minus.” This I love. I love this. And I really don’t care that I basically just said the same thing back-to-back; I mean what I say. This track has an older Finger Eleven feel to it, and so to of course a massive Deftones feel as well as F-11 basically based their entire essence of being on trying to capture that sound. It’s a heavy-hitter though…a track with real lasting impact you’ll remember easily when next you hear it.

The same can absolutely be said for the incredible track “GC kIDS” – what a great track! Can someone get their drummer some water? I’m starting to feel sorry for this guy…but way sorrier for those poor skins he BEATS THE HELL right out of. Honestly…what a beast this guy is and what an incredible player. With the standout vocals in this band, and the guitars constantly raising their game to create uniquely catchy hooks and riffs…the skillset in each player of Trevino constantly puts the others in check. No one could drop the ball in this band without it being brutally noticed; imagine how quickly timing or tone issues would stand out in a track like “East Coast” – and instead we get a flawlessly convincing performance from this incredible band each and every time they push the record button. This one is definitely on the lighter side for them…nearly into the territory of a band like Switchfoot with this stadium worthy song. Good lord…I’ve mentioned that the drummer is amazing right? No, I do not know him, nor is he related.

What started incredibly ends unbelievably; my absolute favourite vocals of the entire album come on “Hitman;” which is a massive stand-out of a song overall and I can only imagine one of the most satisfying you’ll most likely see in a live show from Trevino. This song just explodes in all the right ways, the harmonies and lyrics are perfect as perfect get…the lead vocals are perfectly hanging on to all the right words; “Hitman” connects big time, bulls-eye. The controlled-break in the lead singer’s voice has made this one of the most convincing performances I’ve heard in years.

I can’t even BELIEVE that I’m saying this at track FOURTEEN on a hard-rock album…I feel like a bad version of Oliver the musical, begging Trevino if I could “please have some more;” and dear readers, holy shit do they deliver. The final track “Keep Your Distance,” is another one of the strongest tunes on this album of complete standout material and between this song and “Hitman,” they’ve provided EVERY reason to come back and listen to this entire album all over again immediately. The drums…the drums…the DRUMS! I know I’ve said it, but it’s like this guy is on a hamster-wheel and will never find the end of his own energy! When it comes to a crashing end, I feel nothing but HAPPY that this BEAST of a man gets himself a quick break to get some water/oxygen in him before he falls down DEAD.

Every musician in this band should be incredibly proud of what’s been recorded here on Born Again, Bored Again. I hope they all take turns sitting with their jaws open in amazement when they look around their own jam-space and see each other playing; this is a band that needs to appreciate just how amazing they are already, and what an incredibly explosive and entertaining future they have to come.

Find out more about them at: https://www.facebook.com/trevinoband