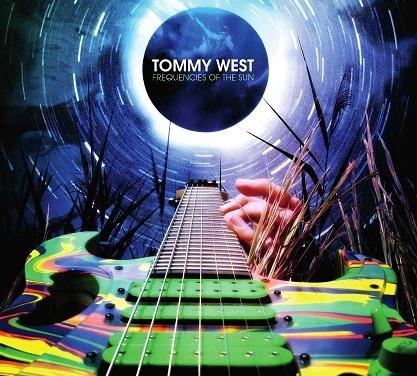 Loading up the official website of Tommy West at biggreenuniverse.com will not only take you to the music…but to a very telling background accompanying it. Look at that beast of a guitar! Brightly colored in a vibrant design…I suppose my point right off the bat is…well…show me ONE slacker with a guitar this badass and I’ll show you a guy that was lucky enough to maybe HOLD a guitar like Tommy’s for a photo op. No – the real truth in the matter is…a guitar like this is every indication that it’s about to be held or played by a true virtuoso.

So like I said, Mr. West…I knew full well from picture alone what you’d be bringing to the table…only question left was…how would you measure up?
On Frequencies Of The Sun, Tommy West is firing on all musical cylinders. Not only is there tremendous playing ability displayed on virtually any track you can click on – but also some really in-depth songwriting as well. For those Satriani, Vai and I’d say especially Johnson fans out there…Tommy West is not too far from becoming a part of a classic G3 or G4 lineup himself if you were to ask me. Songs like “Pyre Of The Pale Horse” and “Torn,” occurring early on in the album came out massively impressive in tone, playing and overall sound.

Like many of his peers – the songs are of course structured to be able to carry massively huge guitar solos and still be somewhat in the framework of a song people will listen to. “Big Green Universe” is a perfect example of a track in this style that is still reachable by people outside of the genre. Instrumental seems to generic of a genre to call it….my brother in law calls it the “meedeley” genre.

Sigh…what can I say? The poor kid grew up on nothing but a steady diet of automobiles and exhaust fumes…

But I suppose this is where I come in anyway. I can hear a song like West’s “Journey to Ixtlan” and know beyond a shadow of a doubt I’m listening to one of the future guitar-masters of our time. The solos and proficiency in play are top-notch excitement and played with such enthusiasm and genuine skill that Tommy really has managed to make it all sound easy for him. Which of course leaves some credit to be had for the production on this album – it’s put together clean and crystal clear, giving way for these complicated parts of Tommy’s to really shine through. Whether he’s slowing it down a little, like on “Traces Of Forever,” or lightening up the sound like on the beautiful “Presence” – West will never let you down. Again…I try not to single any one song out too hard in a review…but it’s really hard to deny just how well-nailed a track like “Presence” really is…this might be one of the best of West for certain.

Where I did feel surprised the most was in the creativity all throughout Frequencies Of The Sun. While certainly the playing and skill level can be compared to the giants of the guitar like Satch or Vai – the sounds…the songs themselves…are really unique to themselves and actually quite brilliant. I’m a big fan of what Tommy has pulled off here. I think of a tracks like the final two on this album, “Incantevole Magia Della Fia” and “Rainbow Bridge” and kind of just have to marvel at them while I sit here. It’s clear that Tommy and I hear things differently than others do…or at least I hope he enjoys his album as much as I am…but I sure dig the subtleties found throughout these songs and album. It’s those tiny tweaks…those dynamics in frequencies that have clearly both fascinated and inspired this album from Tommy West.

What else can be said other than Tommy West’s Frequencies Of The Sun will happily occupy the frequencies of the stereos here at sleepingbagstudios well into the future. Awesome.