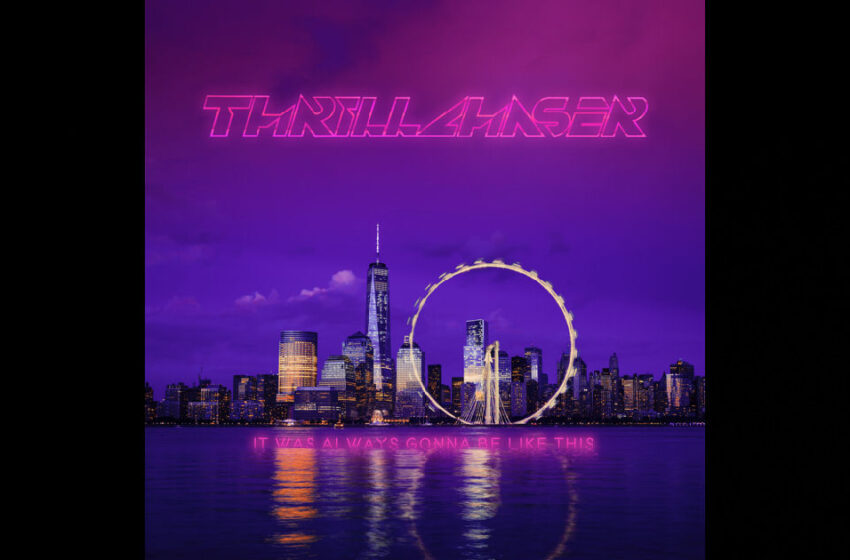 I mean…it was a super solid day filled with passionate artists, bands, and music already on the Tuesday I wrote this – “Fantasy” by THRILLCHASER seemed to completely fit into the awesomeness I was having that day at our homepage, and I figured why not add one more super stellar band with new tunes you should know about.  And then I had to wait…cause it seemed like there was an announcement coming or something?  I have the feeling I’m early on this even now.  Timing aside – you did read that correctly…there’s more than one coming from THRILLCHASER – and soon!  Soon-ish?  How about that?  Okay…I don’t have details on a single one of’em except this shiny song “Fantasy” I’ve got here – but I can confirm it’s more than enough to already have me looking forward to this band’s upcoming album It Was Always Gonna Be Like This.  According to the official website, it’ll be on the way “shortly” – and according to ME, if that’s like, not in the next five-minutes or so, that’s gonna be a painfully long wait – I want MORE of this!

How WILL I find the patience to wait this out when I love what I hear this much?  Y’all think I’ve been joking when I’ve claimed here a million times on these pages that Starship’s “Nothing’s Gonna Stop Us Now” is still one of the best songs ever made…and now…here we are…with “Fantasy” – a song rooted unabashedly in that same vibrant uplifting 80s dreamy Pop style, and you’ll know I’ve been tellin’ ya the truth all along.  They’re completely different tunes of course…the point is, I was raised in the era where sounds & songs like this reigned supreme; and while my Dad probably tried to continue to hold onto the 70s or wait for the 90s to come, the slick & stylistic melodic sounds of the 80s were inescapable.  I still had to almost sneak in doses of audible confectionary like this in my childhood in between a steady diet of mainly Rock music flowing throughout the household…but boy did I ever find a way to make sure that happened…and as a result of that dedication, I still enjoy much of that era’s sound to this very day now.  So when it shows up again, polished & ready to roll out into the world in ways relevant for today like you’ll hear on the new THRILLCHASER song “Fantasy” – you better believe I get a little bit extra excited.  They’ve got a style that instantly brings comforting nostalgia with it & a sound that never really gets old.

You run into these scenarios sometimes where a band like THRILLCHASER has such an incredible personality up front on the mic that it’s almost like people can forget that a singer as sensational as Nicole Zell is, is able to thrive as hard as she is largely because she’s got the confidence & skill yes, but also because she’s got music surrounding her played by two dudes she knows she can rely on here.  There’s not a hair outta place on “Fantasy” – and while we’re all bound to remember the spellbinding performance we hear from Zell’s absolutely amazing vocals, let’s also take a moment to point out the fact that Rob Lundy on the bass & synths, and Christopher Spousta on the drums & percussion, are 100% crushin’ it at every possible opportunity they got.  The balance of the strengths between them all is impeccably strong, and every single member in THRILLCHASER has a defined role they individually excel at, while contributing to a perfectly played, unified performance that makes the most of their combined talents.  Essentially, “Fantasy” is loaded with luscious sound that’s pretty much impossible not to love.

The only semi-question left to be answered is whether or not this song will work out there in the ol’ music-scene…and chances are, the answer has already come back a resounding YES from anyone that’s had the opportunity to listen.  I’ll put it to you this way – I’m no genius, never have been, never will be – I’m just a guy that knows what sounds great and what’s drifting slightly wide of the mark – but the only thing that stopped me from posting this up excitedly the moment I could have, days ago, was a message on their social-media boards that hinted at a big announcement coming on the 16th as well…so I figured I’d hold back and let them tell you their good news first, before I dropped mine here onto these pages of ours.  The point is, I’m pretty much a raving lunatic for this song they’ve got with “Fantasy” – and I’m absolutely stoked to hear more from this band at any point in time – they have a tight, professional, and entirely well produced sound, and THRILLCHASER is loaded with talent between the sum of their parts.  So if I’m any indication – yes, yes, YES – this song will definitely make an impact on the hearts & minds out there listening…what THRILLCHASER has created is by no means dated or limited to the 80s even if it leans on many of the same aspects in the writing, sound, and production that made the era memorable – make no mistake, “Fantasy” is a surefire hit, no matter what era or decade you happened to find it in.

You could cite current acts all day long from Chvrches to The Weeknd to Haim that are experimenting with their own methods of bringing that shiny style of well-produced Pop sound to the surface of the mainstream right now – and in a sense, you can consider THRILLCHASER to be an extension of that.  It’s not at all inconceivable that a band like this could very well open up a show for any of those acts and fit right in seamlessly.  That’s before they go on to take over the scene themselves, which of course…you never know…they just might…they’ve definitely got the talent, they’ve got the sound, and they’ve got an absolutely phenomenal X-factor right there in the front with what Nicole Zell brings to their band’s identity with her outstanding voice.  Like…for real…I know I’m listening to this early and writing this in advance of when it gets put out there & all at the moment – but the second you hear this song, you’ll know exactly what I’m saying here…THRILLCHASER is extremely enticing, highly skilled, professionally focused, and executing their material with precision from every angle.  Whether it’s totally your jam, or whether it’s not is almost beside the point altogether – “Fantasy” is a flawless tune, there’s no two ways about it and it’s a conclusion that any set of ears listening should have no probably naturally drawing to.

Find out more about THRILLCHASER at their official website at:  https://www.thrillchsr.com