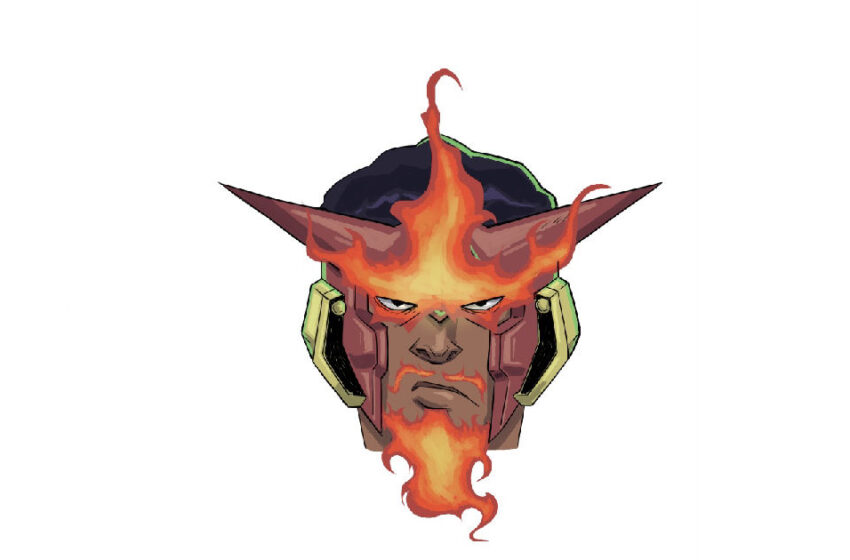 “The songs are titled Zenkai Boost x FSWA and Domain Expansion EX.  I’m an Otaku Rapper who just learned how to rap in February and I rap for fun.”  I feel like I know what half of these words mean.  I am…so clearly out of touch!  As always, I just tell ya what I can – I know what sounds good, that’s about all I’ve ever claimed to know anything about.  An “Otaku Rapper?”  What the heck even is that anyway?

Ahhhhhhh…okay, I get it now – thanks Google.  Anime-inspired Rap & Hip-Hop.  Alright, right on.  Like I always tell ya, we all gotta write about something don’t we?  So sure, why not?  From what I can tell in what I’ve heard in these two singles, and what I can see in TheGAMRKage’s pages online, that would merely be an aspect of what ya might hear, but not the full picture.  Ultimately, this cat’s got a wildly dynamic style on the m-i-c and proves he’s a highly capable wordsmith in these two cuts alone – and if this is where it’s all startin’ up for TheGAMRKage…buckle the fuck up, because this dude’s got potential to hit the scene hard.  He’s got the kind of frenetic energy & creativity of an artist like Childish Gambino with the lyrical clarity of someone like Gift Of Gab, armed with similarly intricate & fluid flow in his rhymes that brings the realms of stylistic sound together with something real to say & a mindset with something to prove.  You can hear all this in action right from the drop as he starts crushin’ bars on “Zenkai Boost x FWSA” and sets this track off on its way to the next-level.  This would be the second time in like, the last twenty-four hours or so that I’ve heard an artist or band that has just started this year that sounds like they’ve been in the game for a decade already – TheGAMRKage JUST learned to rap in February?  For real?  Talk about hittin’ the ground running y’all.  Listening to something like “Zenkai Boost x FWSA” and how much confidence, precision, and on-point passion this dude is packin’ into every syllable already this early on in his career?  C’mon y’all…this guy’s built to be a competitor, and he’s got the determination, spirit, and skill it takes to go out and conquer the scene.  I still have absolutely no idea what that title means, but I’m positive that many of you do – at the end of the day, once you crack open the can, that’s where the flavor’s at anyhow right?  You push play on “Zenkai Boost x FWSA” and just see if you don’t wanna stick around for every solitary second of TheGAMRKage hit the bars with power, strength, style and conviction…I told ya – I might not ever know what someone is singing about or rapping about or what an instrumental cut is supposed to be about – I just know what sounds good, and this is that without question.  Listen to the cleverness in the switch as the second-half of this cut takes hold, right after a completely different vibe beforehand, yet transitioning as seamlessly & smooth as could potentially be done.  You see what I’m sayin’ y’all?  It’s not just what he’s rapping about – it’s his entire approach and all the details that are getting put in here from the lead to the background, you feel me?  We go right with The GAMRKage as he switches it up on “Zenkai Boost x FWSA” and proves that not only does he have a solid range of talent, but he can thrive in multiple vibes.  “Understand that GAMR is the best” – I mean…if he keeps the quality of his cuts up like you’ll hear on “Zenkai Boost x FWSA” and the whole world gets a bit more into Anime, I suppose there ain’t any reason I can think of that could stop him from being #1 – this guy is incredible!  To think that he’s already as great as he is after only learning to rap just a half-year prior to what we hear now?  Astounding really.  TheGAMRKage has every reason to believe he could go the distance & break ground worldwide, 100%.

Lest I remind you all, it ain’t on the artist to come down to our level, it’s on all of us to level-up to theirs.

So I’m more than fine with being taught something in the process of listening, we’re all students of the game when it comes right down to it, no matter how long we’ve been in it.  Was I aware of Otaku Rap before?  Yes.  Did I have an actual name for what I would have been listening to?  Hell no!  Genre-wise, I didn’t realize just how many people out there were pursuing the Otaku Rap vibe, but I certainly get it now.  Don’t get it twisted though – it’s not like TheGAMRKage makes it all so meta that you wouldn’t be able to find your way in – like I told ya from the start, it’s just an aspect of his overall sound & what he does – ultimately, he brings a ton more to the table that’s bound to appeal to a whole lotta listeners out there.  Listen to the way he rocks the mic on “Domain Expansion EX” for example…from speed to style, swagger, charisma…hunger for each and every syllable and the desire to make it all have an impact – TheGAMRKage is putting in the kind of high-level work, consistency, and uniqueness that gets noticed.  Personally I’ve got no preference whatsoever between these two singles – in my opinion, TheGAMRKage slays both with resounding confidence & commitment…these are statement cuts that definitely declare this man on the scene and are guaranteed to keep him in rotation on playlists all over the map.  “Domain Expansion EX” will prove to ya that he’s got the X-factor talent and vibe that connects, the lyrical ability to craft bars that hit just as hard for their complexity as they do for their content – all in all, TheGAMRKage gives you zero reason to complain about anything you’ll hear, and in the twists he’s packin’ into the middle of these cuts, it’s like you get a 2-for-1 deal each time you listen, but without the cheapness, you feel me?  That’s what you call VALUE y’all – it’s a totally different thing – and TheGAMRKage gives you plenty of it, bar for bar, pound for pound.  “Now that I’m here I’ma end your career” – he’s put the warning out there – it’s up to the rest of the emcees out there to sharpen their game if they wanna keep up to this guy.  He’s rock-solid already – in the years to follow, he’ll be kickin’ the rest of what’s left of the collective ass he hasn’t already booted, as he stomps his way to #1 with verbal authority, versatile bars, undeniable creativity, and material designed to be turned straight UP.

Find out more about the man behind the m-i-c by visiting TheGAMRKage’s official page at Facebook here:  https://www.facebook.com/Thegamrkage