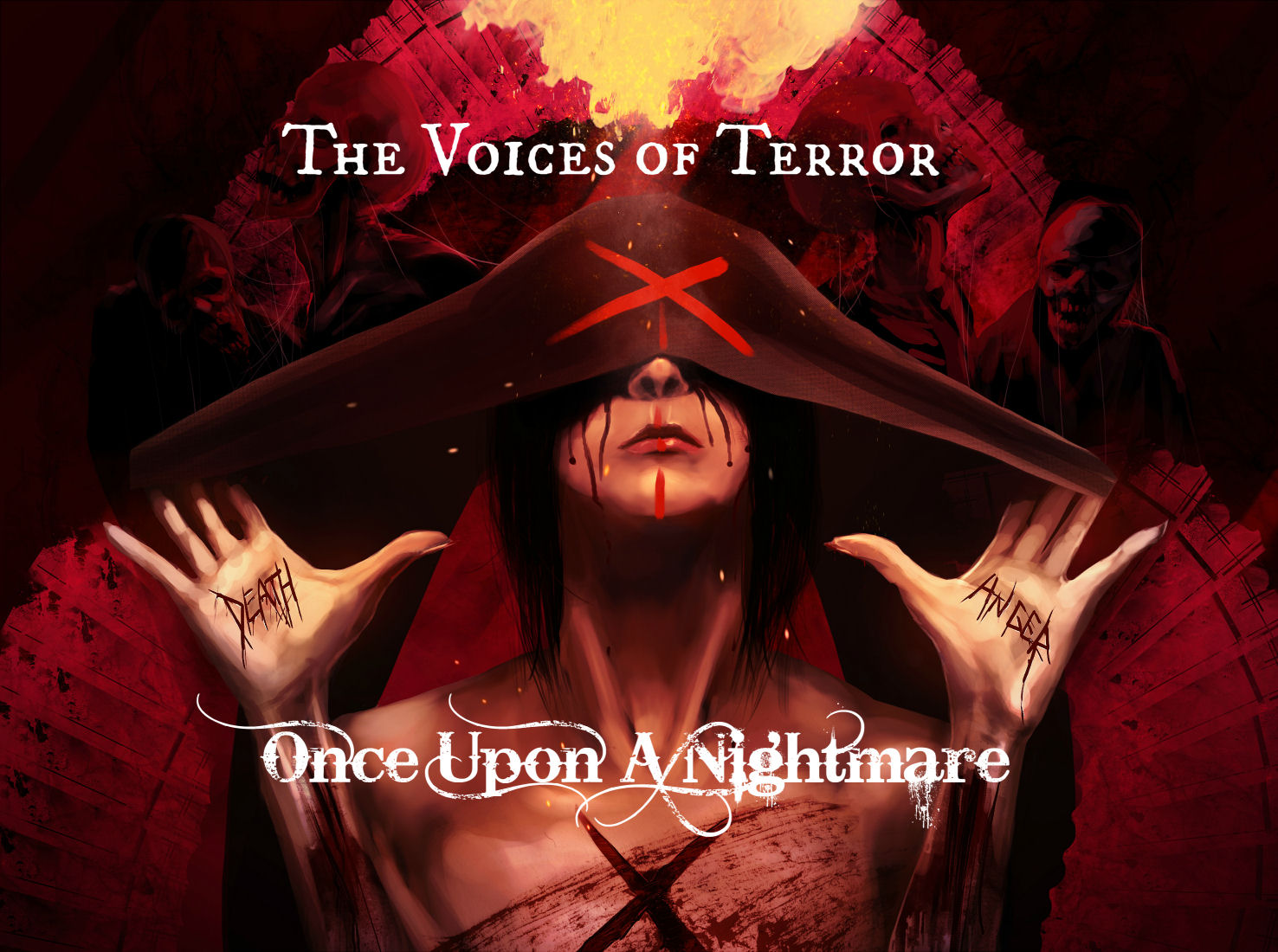 The Voices Of Terror – Once Upon A Nightmare – Album Review

When The Voices Of Terror came across the desk and onto my playlist, it was described to me as ‘Alternative Rap’ – and that got me thinking about what may/may-not be considered ‘alternative’ by the two rappers that make up the duo…or I suppose anyone out there for that matter. Would I truly be in for something ‘different’ today? We all know what happened to the ‘Alternative’ Rock-genre…essentially it just became the mainstream and largely dominates what people know as ‘Rock N’ Roll’ to this very day. But if you research the roots of it all…it didn’t start out cookie-cutter at all; those first ‘Alternative’ Rock bands truly WERE different than the rest of the music out there; by the very definition of the term/genre itself…they gave us a welcome alternative to everything else going on.

You could definitely make a strong argument that The Voices Of Terror are that alternative to what’s going on in rap-music today. Listening to the all-out attack and assault of music & lyrics from the opening track “No Beauty In The Beast” suggest that the two-emcees from New Jersey – Zero & Mike Walker – are about to take these beats & rhymes straight to your speakers and straight into your dome. There’s a hunger and an aggression in the way they deliver overtop of the frantic EDM-inspired beat with their effect-laden vocals…and you can’t deny it, or at least I couldn’t…that’s a heck of a lot different than most of the rap I’ve typically stumbled upon over time. “No Beauty In The Beast” is dramatic…theatrical even at points…the duo of Mike & Zero come out confidently and more than ready to make the most out of the music and change it all up into straight-entertainment. Raging through different, complex rhythms in the music to rip-rhymes on, The Voices Of Terror quickly establish a big sound and a large presence on their new album Once Upon A Nightmare.

Heading into even bigger & badder territory – “Immortal Combat” was an early favourite for me on this record – this song is HUGE. And for what it’s worth…I think the first song’s attack helps tune your ear for what’s coming up next, and “Immortal Combat” is definitely the first track to benefit from that. There are so many things done right in this track, it makes the ol’ head spin. “Immortal Combat” begins with its savagely-massive chorus…it’s nothing less than a musical call-to-arms…dangerous…menacing…but also incredibly empowering and energizing. I’ve heard people talk about what songs they use to get ready for ‘game time’ many times throughout the years…I’m thinking this would be the track I’d personally use – “Immortal Combat” gets me AMPED UP and ready to crush some fools! Excellent music, smart production and writing fuel this second-cut…the samples used from the vocals to the drums…they’re brilliant and mixed perfect on this track.

Chances are “Scarred” is where many people would be able to make a solid judgement on whether they’re in for the rest of the album or not; I’m sure I’m not telling The Voices Of Terror anything new when I say that their music is more challenging than most to listen to. “Scarred” is a track that true-lovers of hip-hop/rap would love without question – a track like this showcases & highlights that relationship between rhythm and poetry. Where’s the rhythm you ask? Wherever the poetry of the words take you my friend…that’s how this game works; and that’s certainly true of The Voices Of Terror. You’ve definitely got yourselves a clearly-defined alternative to what’s out there in Rap-music today – you can hear that; it’s not all simple straight-ahead melodies that are easy to swallow – The Voices Of Terror are making music that give your brain and ears something new, exciting and wild to chew on.

Words are, and should be a large part of Rap-music in my opinion…at least like 85-90% right? I mean…a good beat is one thing…but the words truly represent the genre at its core – and I think that “Tale Of The Outlaw” does a great job of bringing out the more rhythmic-side of the duo. Tons of effects come at you quickly into this one before it settles into its full-groove…each part in the song is heavily defined as they switch from verse to verse with Mike Walker & Zero trading places at the front & center of the spotlight. If anything…this was the song that felt a little like…I dunno if anyone else out there knows that music-service where they will ‘songify’ your idea…their add for the business had a similar sound & production on the vocals. As “Tale Of The Outlaw” and “Of Unsound Mind” ran together back to back…a part of me felt as if for a couple moments here they focus less on being as ‘alternative’ as they’ve been in the beginning with a couple more ‘straight-ahead’ parts; and when I thought about the relationship with the vocals…I’m just counting on them continuing to innovate and mix it up – that twist on the vocals alone wouldn’t be enough to rely on to make this ‘alternative’ – know what I mean? A little more standard on these two cuts back-to-back…still creatively-plentiful in comparison to many but by comparison to their own stuff so far on the record, a little less meat on the bones here but not so little that anyone would be goin’ hungry for something wicked to listen to.

Speaking of the wicked…”As The World Burns” shows the imagery of the post-apocalyptic world through the perspective of The Voices Of Terror. Some purely bizarre verses in this one that’ll leave you scratching your head trying to figure out how to follow the two emcees through their rhymes; playing with tempo & metering like they have much throughout the record – it might be tougher to follow but there’s some pretty intense parts within this track that make the journey worthwhile. I think it’s definitely the perfect set-up for the following-cut, “The Dead Are Coming Back” – I mean…you can’t help but feel like this album is at least flowing in a particular direction if you listen to the lyrics. Especially around this spot on the record…”The Dead Are Coming Back” has an almost old-school Hip-Hop vibe to it like something from Maestro Fresh Wes…like “Drop The Needle” kind of sound/production. It’s haunting – the words do a lot to paint the imagery in your mind as to what this post-apocalyptic era is looking like…which is…hmmmm…a bit on the grim side to say the least! That might just be me…I still tend to prefer my world without zombies stumbling around…I’m cool with movies/songs about’em though – no problems there. In reference to the words & lyrics…the subjects that The Voices Of Terror take on in the themes of their songs…well…there’s no doubt about them being ‘alternative’ from what else is out there…they’re quite unique in that sense overall.

The vocal-chorus and drum build-up of “Rise Of The Wolves” quickly snaps into a solid guitar-line that chops with menace and sets the dangerous atmosphere surrounding this cut. Honestly this is some of the best verse since the beginning of the album…specifically that opening verse…”Rise Of The Wolves” starts out hotter-than-hot and continues to find ways to build itself up as it plays, getting bigger & bigger all the time. I was digging the mix on Mike Walker’s verse as well…part of me thinks the layered effect on the vocals might benefit from a little time off at times to diversify the sound on the mic over the course of the album – but in “Rise Of The Wolves” and its growing intensity…it all seems to fit perfectly.

“A Glorious End” brings back that true-poetic nature inside the writing of the lyricism in The Voices Of Terror. There’s a story here; or perhaps a mission statement of sorts – “A Glorious End” takes that rap/rock atmosphere started in “Rise Of The Wolves” and expands the idea a little further. Bouncing clearly from the lefts & rights of your speakers, “A Glorious End” comes out swinging hard with an intense beat that stays the course and on-point throughout its entire duration. Smart addition of tribal vocal samples towards the end beef it up to make that memorable impact before heading into the final track “Hip-Hop Necrosis.”

Ending cleverly on one of their sharpest-cuts – “Hip-Hop Necrosis” works well from every angle; if you’re still with them at this point of Once Upon A Nightmare then it’s clear that you enjoy the signature-style and sound of The Voices Of Terror. Bringing back a little of the hunger and drive you can hear in the beginning and lyrically bringing it all around full-circle to end the album on notes of victory; they’ve done really well on this record and have truly given you that ‘alternative’ option that has sorely been needed in Hip-Hop/Rap in our present day.

Tags: Album Once Upon A Nightmare sleepingbagstudios The Voices Of Terror