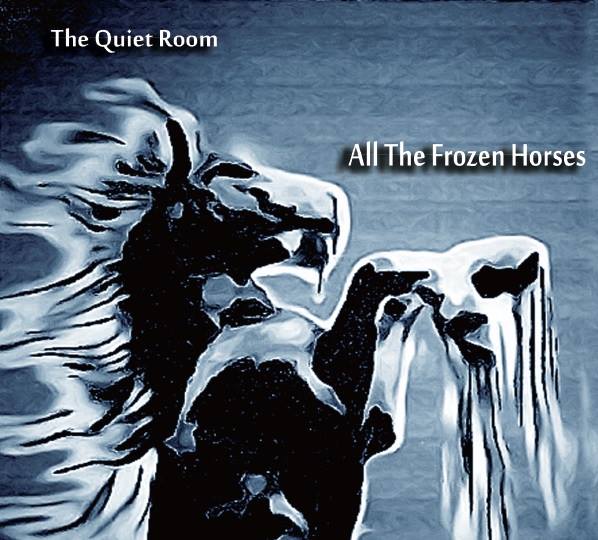 The Quiet Room – All The Frozen Horses – Album Review

Where do I start this? Ha! Even better…WHEN do I officially start this? I feel like I’ve been listening to this new album from Australia’s new alt/rock/electro experiment The Quiet Room for nearly a month and not really known how to express how I feel about it.

Let that be a lesson to you all – if you make complex, unique, creative compositions that challenge my eardrums your reviews WILL be delayed. Serves you damn-right for being all that kinda smart & innovative with your music!

And that’s the case today with the latest album from The Quiet Room, All The Frozen Horses. I kind of pity the reviewer out there that gives this a single spin and thinks they’d just magically ‘get it;’ they wouldn’t – to be truthful, on a first listen you might not ‘get it’ at all. The true magic of The Quiet Room and this beautifully artistic new experimental album is in the repeat listens and really stepping into their world. I found by the second spin through All The Frozen Horses I already liked it more. The third time…more still; until it eventually continued to revolve around in my playlist as I became hopelessly addicted. Even now, after multiple-multiple listens, the opening track “Come Undone” still gives me a complete chill with its haunting atmosphere and echoing vocals.

What you might not already know is that this unique take on music OVERALL (that’s right – Read: New) is coming to us from the pieces of another band that is still together that we know and love; Matt Cahill of Australia’s Evoletah is one half of The Quiet Room making all that interesting noise. It sounds as if to me, listening to a track like “The Arena,” that he’s vocalizing at times with fellow band-mate Andrew Muecke who also founded the band Happy Ghosts. Whether or not it’s both of them, or just one going way-high and way-low with the vocals, this combination works extremely well in a very hypnotic way. Much of this album…I feel could be described in that same fashion.

Listen to the ideas of “Noir De’sir;” this isn’t music for the beginning ear. Truly…this album is one of those ‘if aliens came down and just got a sample of Earth, and got their talons, hands or whatever on THIS…what would THEY think?’ kinda albums. C’mon…you have those too – So add this one! The texture, space and substance on “Noir De’sir” is completely awesome; by the middle of this track it becomes as wide-open as the solar-system and through excellent saxophone tones, low-synth rumble and well-placed, ominous keys.

You’ll either like the meandering saxophone & drum combination of the opening to “My Side Of The Story” or you won’t. It’s instrumental for nearly a minute-and-a-half before busting into an avant-garde poetry-esque vocal set comes along for the ride. I love the tribal-tones & rhythms of the drums, which are really actually ripping it up back there in this super-intense but slow track full of real atmosphere and that dark, back-alley of the jazz-club feeling.

Immediately heading toward the light and having a little fun with that good ol’ auto-tuner on “A Simpler Plan,” this song largely relies on the subtle-melodies of the vocals. Like I mentioned earlier…there’s a truly hypnotic aspect of what The Quiet Room are doing here on All The Frozen Horses…you really can get lost in these sounds. For some reason…there are elements of their music that remind of the Smashing Pumpkins…but in their ‘B-Side’ moments, which were always their ‘A-Sides’ to me personally… I mean c’mon…you can argue ‘Mellon Collie’ all you want but it was Pisces Iscariot that made that band great to me. I digress…but there’s a similar light & airy, free-feeling to the music in tracks like “Q&A” despite a heavier thought-process that remains pretty much a constant on All The Frozen Horses. A track like “Q&A” might be a little ‘loose’ in feel for some, but just like each and every song here on this album, there are some extraordinary moments that will pull you right back in the minute you try to resist them. Listen to “Q&A” come together around two-and-a-half minutes in…you’ll get a good grip on what I mean…that’s a fantastic moment right there; an intensity they carry right to the end of this tune.

As the second-half of the album continues on, The Quiet Room find themselves in an exponentially-experimental couple tracks with “For Our Own Good” and the title-track “All The Frozen Horses.” Arguably these might be the toughest tracks back-to-back to get into on a first listen, but again, you’ll find reward in the repeating. The sparse rambling-verse with subtle music accompaniment of “For Our Own Good” is almost certainly closer to an actual piece of physical artwork than it is to a radio-hit. When followed by the title-track, a narrative that tells the story behind “All The Frozen Horses” against some more subtle sounds as the album drifts towards its final three.

Nearly half-Bowie and half-Pink Floyd, The Quiet Room roam into space-like territory on “Mayan Dream.” The atmosphere spreads out far and wide on this track, the choices of samples and sounds within the last minute are intensely epic in their moments and brought in completely well through the mix itself.

“On The Corner Of Loss & Gone” not only has one of the best titles I’ve read this year, but it also really made me appreciate this combination of music and poetry even more. Where we’re often expecting typical vocals or more singing all together – The Quiet Room have kept it consistently interesting by taking many of their ideas in the opposite direction of which you’d think. The coolest thing about it all is that it’s not sounding pretentious, not sounding forced, and really has unique qualities, textures and instincts that lead to a unique experience time and again when listening. This song and the last, “& I Looked Everywhere” float by quickly & beautifully in their now-signature style at the end of this album totalling just over two-and-a-half minutes combined.

I remember when I personally first started to write songs in a more artistic style. You can literally go in any direction of course with the sound, but at the end of the day there are really only two ways it can go for the most part. One has you creating brilliant bursts of art & music combined that never last too long, the other is quite often dogged by layers of pretentiousness and staggering boredom when creating a meandering piece that ‘really speaks to someone.’ That someone most-often being a distant aunt or a cousin regarded as a loon by the rest of the family and now resides way up the hills somewhere in a cave painting away their final years…

I think that The Quiet Room have gone about this entire thing in a very smart way by putting out these short tunes that represent the full idea without overkill. All The Frozen Horses is an altogether interesting experiment with brave, bold & atmospheric music, bizarre, emotional and impassioned poetic vocals and a way of tying it all together in ways that will capture your imagination through their stunning attention to detail and commitment to a brand-new sound.

Find out more about The Quiet Room at Facebook: https://www.facebook.com/TheQuietRoomOFFICIAL

Tags: Album All The Frozen Horses sleepingbagstudios The Quiet Room