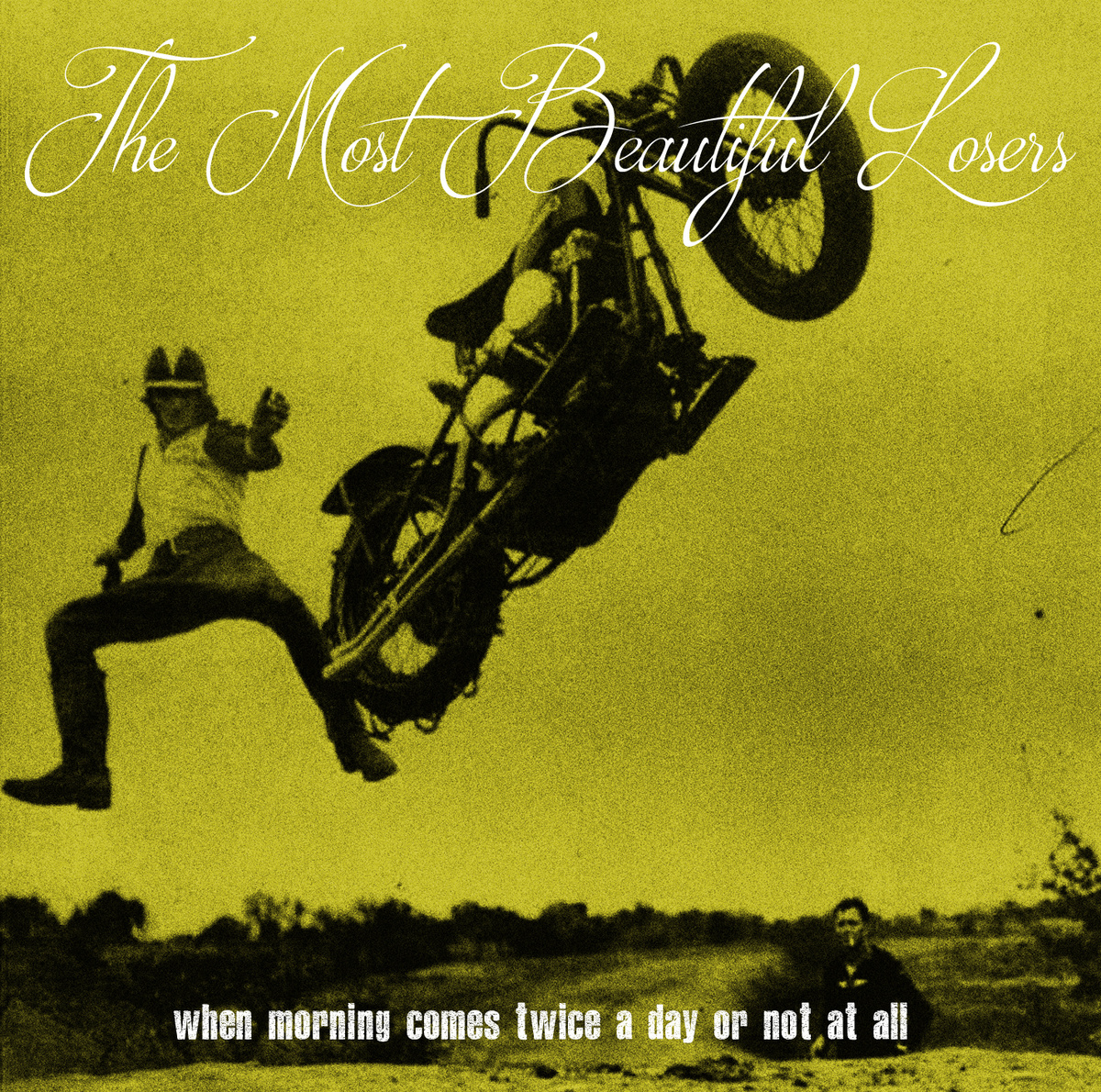 Listening through this new album from The Most Beautiful Losers gives me a new appreciation for what makes for great, memorable lyricism. Melody is important for sure…and even though these guys pack a punk-rock/pop punch and HAVE that in spades…you still need those amazing lines to stand out as they should with the emotional tone and spectacular, authentic delivery they deserve – which they’ve also done. There’s a lot to say and a lot to comment on in this truly sick collection of tunes that are just enough on the raw-side of real to capture anyone’s interest. It’s a little on the wreckless & crazy-side of party-music…and a whole lot focused on sticking to the truly genuine sound that this band has taken, created, borrowed & blended perfectly into a concoction unique unto themselves.

With an extremely accurate description of their music and influences listed on their Bandcamp page & social-media; I would have definitely cited The Replacements…if I was swift enough I would have caught the Uncle Tupelo vibe quicker than I had read it. I would have said Social Distortion or perhaps Seaweed…they remind me much of those guys too…the older stuff for sure. In any event, you can rest in your assurance that this is loaded with bass-intense, pop/rock hooks that can’t be denied.

And I can tell you from first-hand experience that coming BACK to this album for another listen, it just gets more and more addictive to the ears. “Sunday Lull” is such a wicked anthem, it absolutely starts off When Morning Comes Twice A Day Or Not At All with a perfect alt/punk opening and drives forward with an intense drum-beat and elastic bass-line. As impressive as the music sounds – the writing is truly the star here in this opener…you can hear how perfectly they’ve got the vocals to go with this melody. Excellently-smoothed-out solo just after the second minute that not only sounds excellent, but it pretty much ticks the last of the boxes…they’ve put it all out there right in the first cut.

“Blood, Bullets And Guns,” might make them seem a little more ‘hard-core’ than you’d experience if you were to only read the titles. That being said, this song pounds along with relentless authority…literally. I originally thought the lyrics were “Blood, Boots and Guns,” and I suppose in either of those cases it would have suited the overall theme in this song…but I’m much more apt to trust these guys lyrically than I am myself to even get through this article. There are so many memorable lines on this new album that it would be silly to write them out here for you in quotations…this article would simply read like a lyrics sheet. From good times to worse times, drunken nights and endless days, these descriptions & stories they tell through their songs come through clearly and make you appreciate what a backbone great lyricism can provide to great music.

While “Dead Knockin’” takes it up a step towards the power-pop/punk dimension, it tricks itself out like a brand-new caddy with all the bells and whistles by the end. Adding an intense background layer of…well…noise-guitar I suppose…was an excellent way to fill the entire space of this track and your speakers as it comes crashing into “Speechless,” one of the albums slower tunes. And in a perfect blend of Uncle Tupelo-meets-Pavement-meets-Beck, this song ticks along at an almost alt-country tone & tumbleweed pace as they slow it down for a moment to just chill.

After a stripped-down opening to “By Midnight,” The Most Beautiful Losers kick right into gear in this hook-laden punk-pop short & sweet track. Great words here, which is awesome because damn near half of it relies on nearly a-cappella vocals; and if this isn’t the way to close out a live-show I don’t know what is.

A brief foray into a much more popped-out & bright melody through “Don’t Be Blue My Darlin’” before they launch into a nearly Nirvana-style riff and song through “Rearranged.” I’ll say this…if you’re going to pick out ONLY one song called “Rearranged” to have on your ipods…then do yourself a massive favour and tell Fred Durst to go fuck himself once and for all and replace that moldy-oldy with this. This is the powerful energy of this band at its finest. I don’t know if it’s just me…but by the end they remind me somewhat of the band Athlete, albeit a much more aggressive one…I might be nuts but it sounds like there was a bit of an accent thrown onto the vocals towards the very end…

“No Fuckin’ Fun” is an addicting little ditty ain’t it? Right from its crazy-assed opening to the full-blown chorus, this song sounds every bit like the fun it purports not to be. Some of my favourite lines lyrically come out through the hazy, drunken, rambling style of the vocals in a real ‘good-time’ atmosphere in this cut. “Speechless (Alternate Version)” comes in again to break-up the energy a bit…and I’m still feeling very ‘on’ with my assessment and comparisons earlier on in this review discussing the ‘regular-assed’ version. I honestly don’t know if I would have had this particular track be the one representing twice on the album…it’s a good track both times, but I’m not sure what would have been the reasoning behind not just simply selecting one version for this album.

The lo-fi garage-style recording on the sweetly toned track “Love Is A Mix Tape” sounds as if it would actually be playing from a cassette-deck from a pair of the first tiny little tinny ear-bud headphones they ever made back in the what…80’s? It’s a catchy little tune with a lot of melody and a big commitment to style and sound through its production; I think it works.

Between the “Speechless (Alternate Version),” “Love Is A Mix Tape” and the final cut, a live-cut version of “My Exploding Heart” from a performance at Chuck’s Steakhouse, these final three somewhat serve as bonus tracks after those initial eight. “My Exploding Heart” gives a great insight into the energy and atmosphere they pump out from the stage is enticing – I’d be more than interested in seeing these guys after hearing them live here on this final cut. With it being the last song of their set that night, even though these final three songs play out more like an afterthought to the album itself, that live-show-finale feeling lets this album find an ending and finality it deserves.

And if you’re AWESOME and SMART and REALLY LOVE music…then your whatever-player is already set to repeat so the music never stops in your life right? Thought so…that’s why I love you all so much; and that’s also going to pay off for you BIG-time. If you were on the fence about The Most Beautiful Losers even remotely – I can guarantee that the moment you listen to the awesomeness of the beginning once again with “Sunday Lull” for the second time, that it’ll push you right onto their side.

Find out more about them at their Facebook page: https://www.facebook.com/themostbeautifullosers

Tags: Album sleepingbagstudios The Most Beautiful Losers When Morning Comes Twice A Day Or Not At All