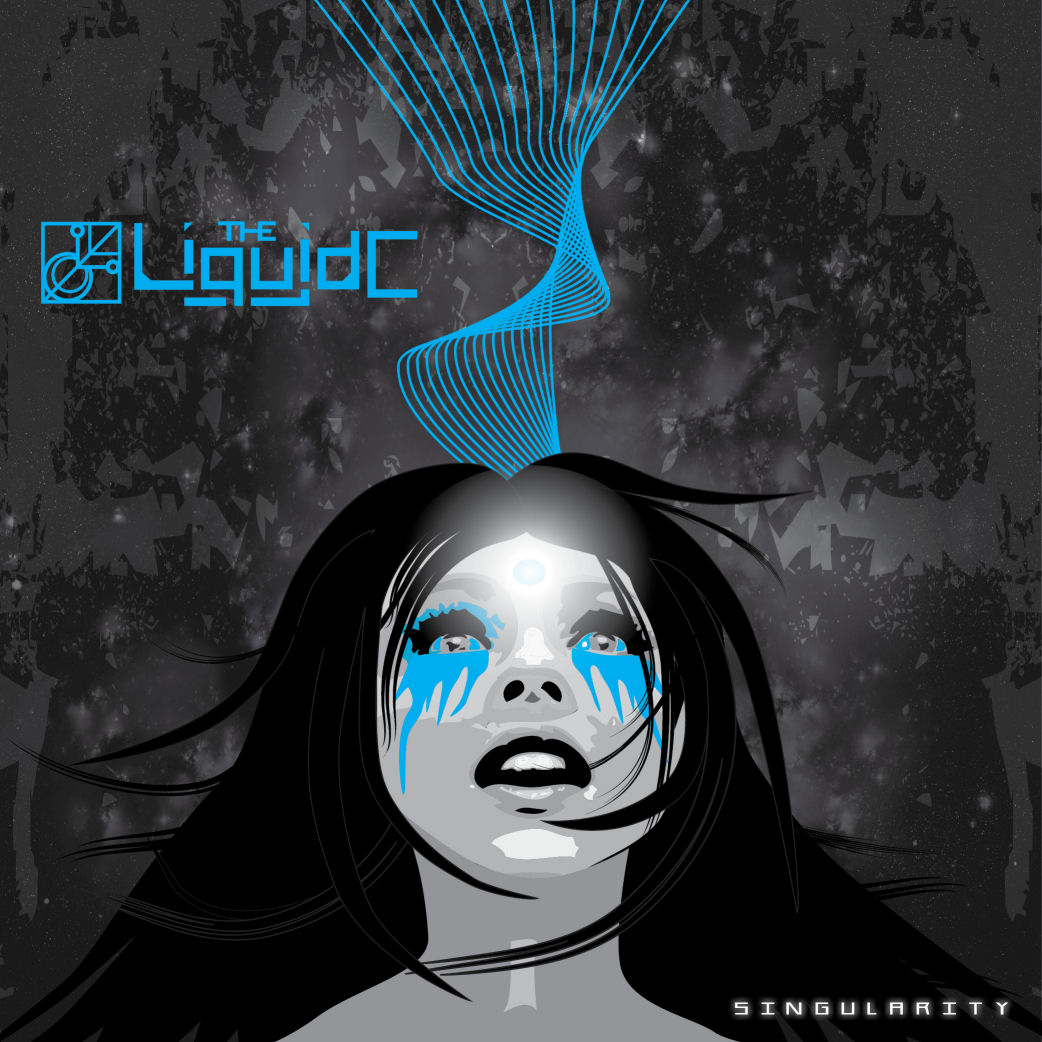 Coming straight at you off ‘Your mamas’ record label – The Liquid C are here to brighten your day with some sunshiny new extreme-metal tunes for your faceholes.  Though the band itself is listed as a duo in their social media at Facebook, consisting of Carlos and Lorenzo Perez – in the world according to Bandcamp, everything you’re about to hear is actually written and performed by Carlos alone.

Lorenzo pitches in on the recording and engineering…so he’s still there behind the boards there somewhere – however they’ve combined their talents the result seems to be a beastly one, this Singularity EP has big gnarly teeth, hooks and claws that’ll dig into you like it’s the audio-representation of the bear in the movie The Revenant.  The Liquid C…Carlos I suppose in particular…seems hell-bent on proving that on a recording, one man can truly rival the sound of an entire three, four or even five-piece band if you play it all just right – and he does.  As many times as I spun these five songs over and over, I’d be hard-pressed to find anything out of place, or even possessing any real flaws worth picking on.  Like all records, there will be tracks you’ll more than likely gravitate to more quickly than others…you’ll find your favorites I’m sure – but for the most part, the Singularity EP is an incredibly even-listening experience in which all five tracks have a bold pull to them.

It starts arguably as hard as it gets until the end of the EP…and thankfully, The Liquid C didn’t fool me before I had a chance to turn-up my system.  It was close…their somewhat falsified, prank of an opening makes you think for a moment you might have your stereo volume down too low…I was just on my way to turning it up, thinking it might be a lower-budget production as “Blood Red Sunset” started and thought better of it for just a couple more seconds to hear what was coming.  The Liquid C flips the switch and the intensity and volume of Singularity’s opening track fucking roars to life and the EP goes on to hold a knife to your throat from there on.

Reminding me somewhat of a more harmonic-version of Expain…or a harder-edged King’s X…or hell, it’s really close to the sound of Idiot Pilot…damn I miss that band.  Right now though – through “Blood Red Sunset” and the storming beat that comes along with it…the screams…the musical mayhem and fury all controlled so professionally and SO DAMN WELL-MIXED…I mean…not missing my Idiot Pilot too damn much in this very moment, not if The Liquid C is on.  There are a ton of great ideas that quickly turn-up as quick as the volume does in the opening of “Blood Red Sunset” – which is also the only tune that Carlos took any assistance on with an excellent bass-performance being played by Matt Storey.  Seriously…this first track quickly rips you a new one…it takes no time at all.  I’m impressed with the amount of progression and complexity, and the spot-on ability that Carlos has to maintain control of the melody within the mayhem of his metal-music.  And just as I was about to give him all the credit in the world for being a master of this one genre already within what I can hear from this one song – he’s not done yet and STILL has another ace up his sleeve…and the jazzy breakdown that occurs heading towards the fourth-minute will honestly leave you speechless.  It’s a true introductory moment and an incredible first listening experience – your ears simply won’t know what to expect, but they should be damn pleased once they hear it all.

And overall…it’s hard to say that any one track is really that much ‘harder’ than the others – they all share points of becoming monstrously beefy.  “Threshold” will go on to prove that point quickly…Carlos can completely carry a song with the guitar-lines he comes up with.  If he’s playing those drums as well and they’re NOT recorded…then the guy is just straight-up superhuman…I’m not sure that he IS – but they also don’t sound programmed at all.  The unraveling madness of “Threshold” spirals through intense guitars, relentless drums and an absolute screaming-command of the vocals.  As extreme as Carlos gets, he retains his tone and control at all times…again in all honesty, it’s quite extraordinary.

Ohhhhhh but WAIT a minute…here it is…get your lighters out…The Liquid C is about to launch into the baby-maker from the EP’s set of songs on “Monologue.”  Alright…maybe it’s not QUITE as romantic as I’m describing it…it’s not exactly going to stay quiet for long…not if anything we’ve heard so far on this EP is any indication.  It becomes closer to the sound of an Incubus track at the start than perhaps anything else until it begins to add a little more flavor through samples…again making it a little closer to something Idiot Pilot would have done.  The amount of melody, control and eventual ferociousness-snap into the biting-intensity after the third-minute ends up being close to the sound of Vaultry from Vancouver Island…every band I’ve referenced is a band I’ve developed a mighty respect for – but they’re all BANDS!  Carlos here…is on his OWN…and the dude is raging, stomping, storming and killing it on Singularity.  “Monologue” is a very satisfying listen…a departure from the rest of the thrashing and into a more controlled and easy-going environment perhaps by comparison to the four tracks surrounding it – but not a single moment less captivating.  Besides…that final payoff is so completely on-point and worth getting to…even if you were worried The Liquid C sold-out for a moment and traded in their metal-skins for mild-ones…you just hang yourself on a moment – the end of “Monologue” is an epic one.

The title-track “Singularity” mixes a more electro-rock vibe into the set; great additions of swirling atmosphere and synth fill the background as the guitar and drums continue to slay overtop.  There always seems to be more than enough low-end to these tracks as well, so I’d assume good ol’ Carlos isn’t afraid to pick up a bass-guitar either…what a BEAST.  “Singularity” as a track has some of the best guitars on the EP in my opinion…the definition and depth to the writing here on this title-cut give it monstrously massive dynamics and really allow the entire song to become one solid journey into The Liquid C’s universe as they hear it.  Love the breakdown and guitars just past the fourth minute…and the eventual bring-back is so powerful it’ll send the blood-rushing to your chubby instantaneously.

Returning to a heavier atmosphere to end the EP with a huge impact, “All I Know” ends Singularity with the raw-power, fury and intensity of which it first started storming into your speakers with.  The Liquid C, at this point, has next to nothing to prove…except that Carlos can hold it completely together on his own all the way to the end of five songs, of which I have little to no doubt at all that he can.  Throughout the four tracks before, he’s proven to be a master of precision and performance, delivering confident performances and extremely impressive writing…no reason to assume he’d fall apart at the end of this record, and of course, he doesn’t.  Clever ideas come to the surface with different elements being added to the vocals, different twists and turns that add more to the overall idea and bring it sharply to life.  The middle of the song seems to beef up a little more with some extremely rad guitars roaring and soaring through the ripping drum-shots…Carlos, vocally again sounds like he’s ten-feet tall and the very monster that haunts your each and every nightmare.  “All I Know” is a gripping-end to what’s been an outstanding listening experience from performance to production – this is as tight as five-tracks from extreme-metal can get – I’m seriously impressed by The Liquid C.

Find out more about The Liquid C from the official pages below: