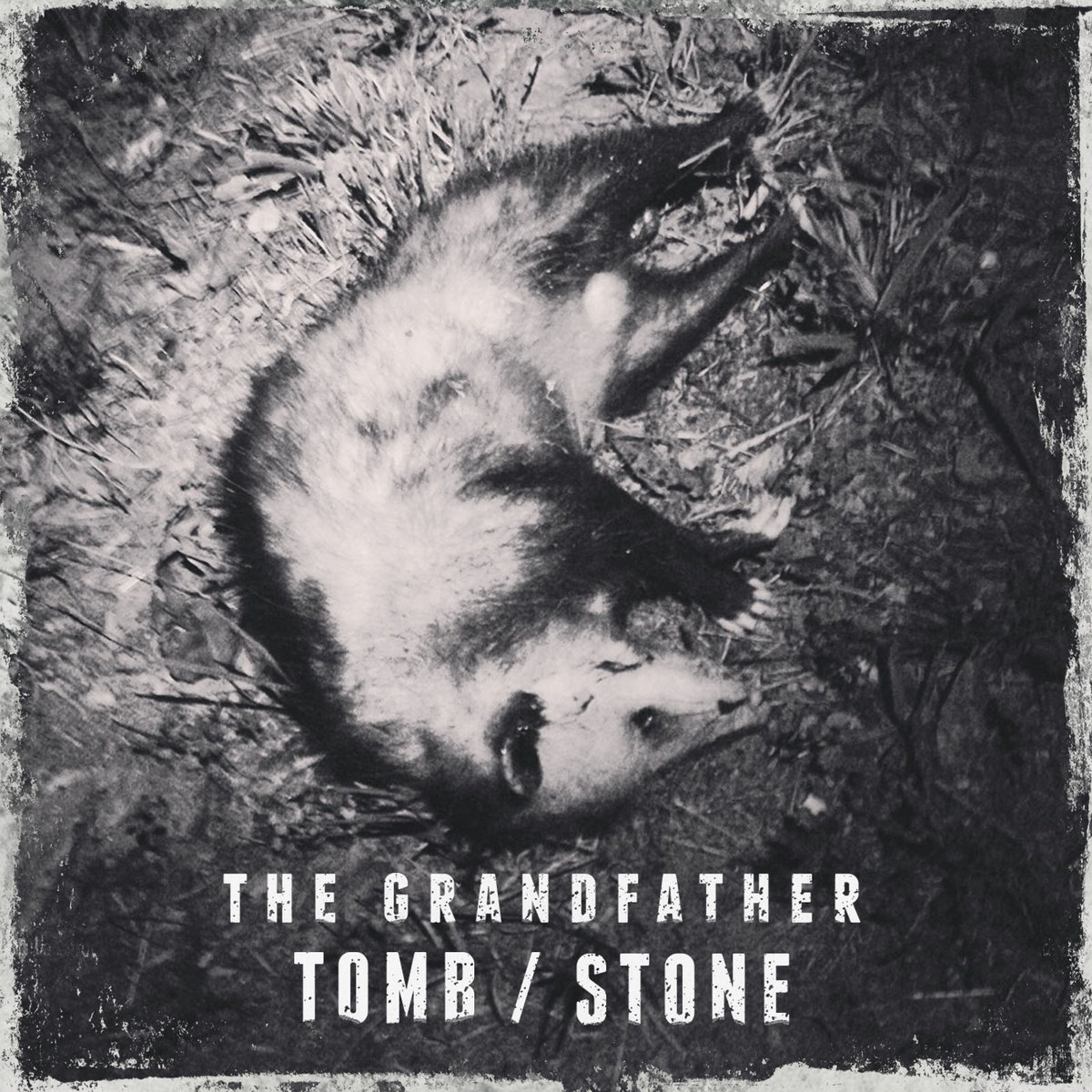 If your grandfather sounded anything like this while you were growing up as a kid, you would have shit your pants and running screaming in the other direction.  At least in like, 85% of cases or more, I guarantee it.  Some of you got lucky with youngsters that are addicted to metal-music from an early age – but not many…I’m just sayin’ – small children would have nightmares if their grandfather or grandparents came accompanied by the sounds here on this EP.  The Grandfather (band) fucking screams their way to a deafening victory on their latest two-track EP, Tomb/Stone – so consider yourselves warned, things are about to get seriously LOUD.

The attack and not-so-subtle approach to the first thirty seconds of “Tomb” just scorches the earth and burns everything surrounding these musicians.  Absolutely beastly…like Meshuggah or Probot style heaviness to it.  The drums are furious pounding meat-hammers…the guitars fuel the intensity and the madness perfectly with riff upon riff coming at you faster than your brain can catch them all as they transition from part to part with precision & ease.  The Grandfather is damn solid in their grindcore-grooves…they’re so damn tight in their mayhem and chaos that they really make what I know to be tremendous hard-work, well…easy!  But I think that really speaks to a band that has found the spot they’re supposed to be in…it might be gnarly and dank as fuck where The Grandfather lives within the realms of music – but clearly this is a band that is thriving in that darkness.  The spiraling guitar work of “Tomb” is seriously awesome to listen to…but those vocals…I have to laugh sometimes knowing I couldn’t ‘get’ this kind of music about a decade ago…now it all seems so logical when you hear it done right like this.  Dude is an absolute monster on the microphone…the maniacal approach and hell-bent delivery on the vocals makes the guy sound ten-feet tall and ready to stomp your bones & village to dust.  Solid transitions through the various timings and pace they use as they lower “Tomb” into the ground slower & slower by the end in what audibly symbolizes the melting-of-face you just experienced.  Yep…that’s fine, we’ll wait…go check the mirror – you will have NO FACE anymore…The Grandfather is now wearing what’s left of it like some sick tribute to Silence Of The Lambs…I guarantee it.

You can still hear tones of Adam Jones-esque Tool-riffs in the guitars of both “Tomb” and “Stone” but that’s about the lightest comparison that can possibly be made – it’s those vocals and the severe attack they stuff forcefully into the microphones that make it much closer to something like Meshuggah.  Point being…there is crossover appeal here…I’m not talking R&B and Pop-fans…but the rock/metal crowd and all its sub-genres should really give this a serious listen.  “Stone” just rips the speakers in half amongst its storming chaos and destruction.  The Grandfather is one big, burly and beastly motherfucker…I can’t even imagine this coming at me with the wooden spoon to beat my ass for something I did wrong – I’d just behave instead of The Grandfather yelling at me.  But again…that’s from the perspective of the kid in me…as adult, I can tell you this fully kicks all the ass.  The confidence and massive-dynamics of this band are as exciting as they are dangerous & deadly in sound.

I’ve said many times in conversations just how hard it is to really get an amazing scream to come out flawless…but every time The Grandfather steps up, the microphone gets beat down, yelled at and sent packing…they NAIL these vocals perfectly.  I’ve heard many bands attempt this and fail miserably short of the mark or puke in the process – but you won’t even hear any dry-heaving here, The Grandfather has some serious pros in the band and everything coming out from both the faces and the amplifiers is packed full of sweet, blissful, passionate rage and the thundering boot of the gods themselves.  The grind of “Stone” is hypnotic and completely awesome…the song pulls you right in for like, nearly a minute or more before it lets loose the fury and storms your faceholes like their the beach at Normandy.  Everything is seriously well mixed though…the parts are massively inventive and the songs are innovative & entertaining.  Loved the breakdown of “Stone” – maybe just because I knew that’d force them to come storming back in once again…The Grandfather isn’t the kind of band to leave you on a quiet note, not that I can figure…  With a relentless pound and grind in the final minute – “Stone” can’t do anything else BUT leave an impact on you…you’ll be lucky enough if it doesn’t draw a chalk-line around your body and try to tag your toes.  The Grandfather is hard as fuck…and even though I’m like, 99.9% suspicious that this music might have actually just tried to kill me…I gotta say it was massively impressive to the point where I’d forgive it if it did.  HUGE sounds, WICKED aggression and professionally recorded/performed – I’d say that The Grandfather has got the maximum that they could get from these two tracks, they gotta at least have a seriously creepy smile on their face – this EP is a victory for sure.