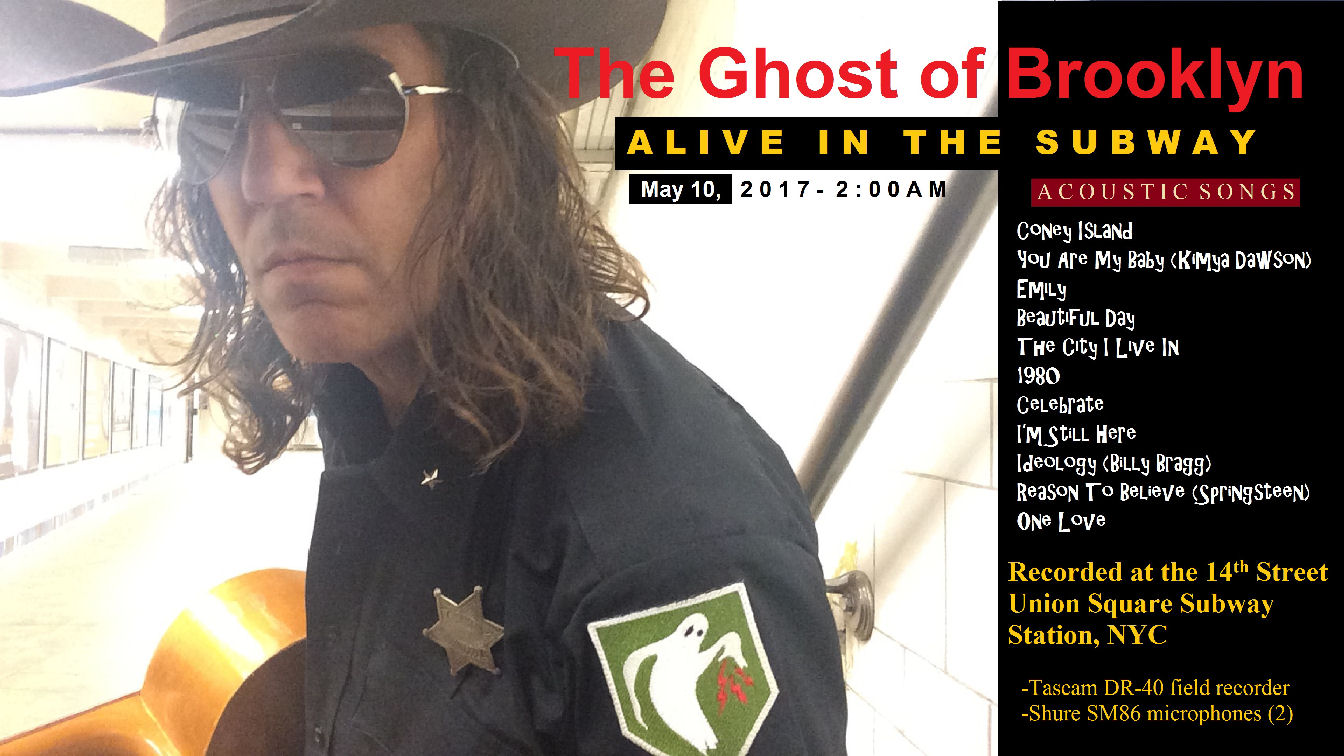 The Ghost Of Brooklyn – Alive In The Subway – Album Review

Holy Ghost!  This dude’s still on our main page from the LAST time we reviewed him, which was like, only ten days ago when we reviewed The Ghost Of Brooklyn’s album Graveyard On The Hill.  We haven’t even had a full rotation on the homepage since then, and he’s already back with another album, recorded acoustic & live in a subway station in NYC on May 10th of this year.  Hard-working Ghost…you gotta respect work ethic like this that still exists long past the point of his own physical existence.

All that being said…point me towards an independent musician that doesn’t feel like a ghost at some point in their career and I’ll show you a truly fictional character.  To think that there are people every day that might just pass right by him as The Ghost Of Brooklyn plays a set on the corner somewhere; think about that for a moment…that’s happening somewhere in your city too right now more than likely.  We all reluctantly pay anywhere between $25-$100 for a concert – heck, sometimes even willingly…but how often do you find yourself stopping to listen to music that’s being offered for free longer than it takes for the crosswalk light to change?  It’s something to certainly consider.

Alive In The Subway includes many of the songs we’ve heard from The Ghost Of Brooklyn in the past…some from when we first discovered him like “Coney Island” & “1980,” tunes from his record I Am The Ghost Of Brooklyn like “Emily,” “I’m Still Here” and “Beautiful Day” and others as recent as the last album we checked out like “Celebrate” – but also a handful of stuff I hadn’t heard along with some new covers too.  At this point in his own career, The Ghost has a large catalog of songs & ideas to draw from continually in order to create different sets for different nights and keep it all entertaining…in addition to that, the constant flow of new stuff certainly indicates he’s always writing, always creating.  But where does this fit in today’s world?

Honestly…you can look at it two ways; everywhere and nowhere…but I suppose to be further honest, I often feel that way about many bands/artists out there.  It just comes down to what you’re willing to do and how willing you are to put yourself out there…not just in the capacities that you know of, but also in the multiple, many realms that you more than likely don’t know of.  For example…anyone seen the TV show The Leftovers this season?  Good lordy talk about RANDOM!  Believe me when I say…shows are always on the lookout for that perfect indie song that will really help a scene stand-out & be memorable.  Does it need to be professionally recorded, completely rounded corners & all to get placement in a situation like that?  No.  A lot of the time, television and film soundtracks are looking for as genuine & honest of a sound in the recording as they can find.  Songs like “Beautiful Day” or “The City I Live In” from Alive In The Subway could turn up the volume of a sweet scene in a show and give the sentiment the impact an innocence & honesty it deserves…music helps us communicate just as much as it communicates on its own.  So that’s one place I’d be shopping my stuff if I were The Ghost Of Brooklyn…hit up those indie filmmakers and get songs into low-budget shows and watch the opportunities help the music expand, grow and then find other opportunities as a result of the time, effort & experience.

Networking…whether you’re talking about it in relation to TV/Films or just the art of communication in general…can be so vitally important.  I remember seeing one of my heroes onstage at a show once by complete fluke…an unscheduled performance, just because the dude was available and ready at any moment – just like The Ghost is now.  I went to watch local-badass Matthew Good at the Commodore Ballroom in Vancouver…and as it turned out, his opening act had to completely bail on him.  Fortunately for Matt (and for me!) – Todd Kerns (Age Of Electric) lived next-door to him and was able to throw on a jacket, grab his guitar and come out to open within fifteen minutes of being notified.  That’s fucking rock’n’roll right there is what that is – so cool.  Point being…that’s people that know people…and we all know people…if we don’t know people, we can still find a way to know people…if that makes us uncomfortable…well…too bad.  If you want the music to really get out there or word to be spread, it takes a great many hands to make that happen.  Knowing a few key acts in the local-scene could present some huge opportunities for The Ghost to appear on many stages out there…in terms of set-up & take-down & overall readiness to jump in and open-up a show – he’s got it all down to a science I’m sure.

BUT…with all this being said…I kept coming back to one thought while listening to Alive In The Subway and trying to think on where we’d find The Ghost Of Brooklyn’s music and where it could go from here…and I started to think of the classic performers of acoustic-tunes…storytellers like Billy Bragg, Springsteen and even one of my own favorites, Mike Doughty.  The Ghost knows his style & sound well enough to know it suits songs like his cover of Bragg’s “Ideology” and Springsteen’s “Reason To Believe” – it was the 3rd name on my list that made me think about his set more than anything else.  Mike Doughty is YAPPY.  I love him to death…but the man can also entertain just as much through what he says and his natural personality as he can through his music; politely put, the man can tell a story.  The Ghost Of Brooklyn might not need to necessarily take it as far as Mike does on any given album…but I’d recommend giving some of his live records a listen to hear what makes each experience new & different than the last.  From Doughty to Bragg to Springsteen – these artists don’t often just give us their songs without their stories to go with them…and this might be something really worth looking at when it comes to the story of The Ghost and his music.  Having that banter with the people around…those unique anecdotes or observations…they can take a full set of music we already know and make it entirely new again with a whole new personality.  Or again, in reference to Mike Doughty (Soul Coughing) – when he went solo he played everything from coffee shops to sidewalks to clubs & bars, and quite often he went out with just a guitar and a JAR for people to put questions into.  He barely even had to say anything at all…I think it might have had a little sign that said ‘question jar,’ some paper and a pen…and people kept stuffing this thing full all night long.  In free moments while tuning-up or getting ready to play another tune, he’d reach into the jar and read off a question…obviously each night told a different story & he would also have to think on his feet to find a worthwhile answer.  Challenging as an artist for sure…but again, he found a way to make it all unique for himself and for the audience; no matter if he was playing an entire set of songs they all knew by heart…it gave them something new.  The Ghost has a persona and a personality working in his favor already through his music – I would think that next evolution in terms of what he could offer the people out there would incorporate a bit more of his surroundings…conversations with people passing by…random banter or even talking with himself…telling a story and leading into that next tune and creating a real experience that goes beyond the music and tells HIS story – that’s where he could go with this.

He’s got all the right tools and ability to do it…which is why I pointed out at the very beginning, music like this can go everywhere and nowhere…and believe it or not, no one has more control over that than The Ghost Of Brooklyn himself.  It has nothing to do with funds…it’s all about drive and communication, networking and opportunities and none of that costs a thing if you can find the right angles.  Finding those right angles can be more work than any other part of anything to do with the music/career…there’s no doubt about that…but where there is effort, there is almost always reward.  Most bands & artists out there don’t have nearly as defined a character as The Ghost Of Brooklyn does…not nearly as much of a chance for a brand or merch or dedicated following as he could have – and it’s about time to start looking at those opportunities yet unexplored in his experience to take his music/career to the next-level he’s looking for.  Unfortunately…as many of us already know…the music is actually the easy part – the rest is a brutal grind of hard work and effort…unless you find a way to love it.  You SHOULD love it – it all adds up to something if you put in the work, establishes fan-bases and evolves the music over time as well…even if you have to trick yourself at the beginning to believe it’s ‘fun’ – DO IT…whatever it takes, do it.  Your music deserves that effort and you know that’s true.

The Ghost Of Brooklyn knows all this to be true as well deep down.  He’s got a solid set of tunes on the acoustic-based live-record Alive In The Subway that shows he’s certainly capable of entertaining, certainly has a versatile & large set of material ready and a charming personality in the melodies he writes.  Plenty of opportunities exist above ground outside of those subways…and the next move to go and grab one of those opportunities is truly his to make.

Find out more about The Ghost Of Brooklyn at Facebook:  https://www.facebook.com/brooklynghost

Tags: Album Alive In The Subway sleepingbagstudios The Ghost Of Brooklyn