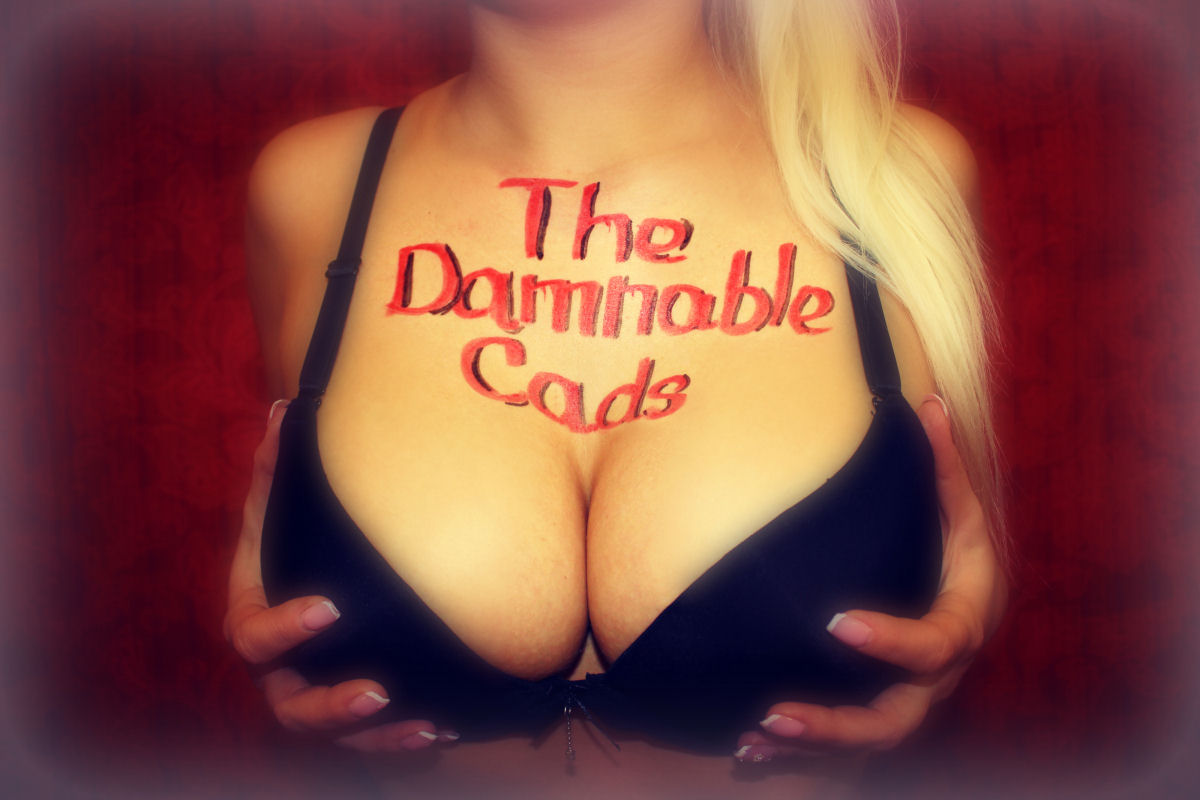 I think I might’ve supposed to have been maybe only reviewing one track from The Damnable Cads today…a song called “All Night Long.”  Before I go any further…I just want it made clear…anything else I might maybe say or perhaps comment upon regarding the other six tracks they’ve got posted alongside it…well…it’s their OWN DAMNABLE FAULT!  I mean…they just recently posted up a song called “Big Bad Man” only days ago…and WHAT…am I supposed to NOT comment on that when it immediately begins to play and starts to hook me in immediately?  Is that REALLY what you’d want, you Damnable Cads you?  They’ve set me up here…I can’t help it if my ears are basically connected to my fingertips and my fingertips to the computer-keyboards these days…the risk was theirs once the music was sent on over!

“Big Bad Man” has a twenty-second intro that’ll make you wonder for a moment if you’ve got your volume up loud enough before it begins to jam in the bass, drums and distorted chops from the guitars.  Alvin sings low & sweetly as his vocals gain confidence and begin to clearly emerge towards the middle-to-end of “Big Bad Man” – and listen to that tone in his voice!  That’s some syrupy-sweet stuff that would honestly end up sounding great in a cover of the Foo Fighter’s “Walking After You,” or…at least throughout the verse anyhow…  Alvin ramps it up alongside his bandmates Nick, Eddie and Jimmy as “Big Bad Man” surges into its chorus powerfully, with crisp & clear tone that you really feel.  That added emotion to the music becomes a staple throughout what I hear in the music on The Damnable Cads Soundcloud page…you can hear it in the laidback and tender “Little Dreamer” almost more than any other once it hits the sweet & simplified chorus.  The chord-progressions from Nick and snappy-beat from Eddie fuel a completely easygoing atmosphere…and Alvin…good lord man!  I’ve not heard someone hit a chorus so beautifully without a single word in a very long time – “Little Dreamer” was a complete pleasure to drift-off with and dream with.

I appreciate the skillful way they play and gel together…even when it’s on tracks I’m not as thrilled about like “Drive Me Wild.”  That’s a perfect example of a track that’s just not my personal taste, but I’d never take away from them that they play it and pull it off well.  For those that like a quintessential Brit-Pop dealio, you’d love this…The Damnable Cads have a largely playful attitude within their music and band and it comes spilling out all over the place on “Drive Me Wild.”  It’s borrowing firmly from the years and years of music’s history and those that paved the way for them today…but it’s also seriously representing a style/sound that hasn’t nearly been as common since Oasis imploded and Blur dropped off the map for Damon Albarn’s inner-madness.

For a moment at the beginning I almost could’ve sworn they were about to bust into a cover of “I Want You To Want Me” from that very first note of the guitar on “Drive Me Wild.”  And even though it’s not particularly a sound for me personally…I think if the hit-counter is correct at their Soundcloud page…well…then let’s just say I’m probably the last man on earth to put up any resistance against anything The Damnable Cads have to offer.  Like DAMN guys!  That’s a serious achievement when you stack up the fact that their seven songs contribute to a completely impressive 1.6-1.8 MILLION listens!  I didn’t grab a calculator for that…but I’m probably not too far off the mark, though by the time this gets published they could already be well over two-million at the rate they’re at!

So…what I’m saying basically I suppose…is take my word here for nothing as I am clearly talking out of my ass if there are already that many people out there attached to the sound of The Damnable Cads – real music-fans know better than any critic could ever comment and clearly, their fans are speaking loudly in numbers.  Were I here only to review the track I was thinking I might be, “All Night Long” – I might feel pretty close to how I felt about “Drive Me Wild” and I’m not sure I’d have the same opinion of The Damnable Cads had it not been for the incredible start in the first two songs which were much more suited to my own personal taste.  “All Night Long” I think…jeez man…what DO I think?  I think it’s…well…it’s…it’s just lacking the incredible redeeming qualities that I heard in those first two songs…which is what I’m now searching for!  I told you…all of these comments…they’ve brought them on themselves by opening my experience with the genius of “Big Bad Man.”  “All Night Long” serves up a sound that’s more close to something like The Knack covers The Ramones…and there’s a LITTLE bit of that sound I’m looking for at the tail-end of the chorus in “All Night Long” – just not enough of that moment for me throughout the entire song!

“She’s A Dreamer” comes out sounding like a smooth combination of Donovan-meets-The-Beatles…and I think this track works really well for them.  In a sense…it kind of has a ‘rock-standard’ sound to it…a classic-sound if you will…but it’s groovin’ enough to warrant your attention and it holds on firmly through solid performances from each member once again.  “C’mon Girl” hits closer to the center of that Donovan comparison…maybe you can add a little T-Rex or Steppenwolf…some Free…that kind of sound.  It’s hella-smooth and really sounds fantastic in tone and precision, production and mix; the chorus of “C’mon Girl” is big, amplified and simplified – but pure rock.  Middle of the song you even get a solid dose of a serious solo from Nick that packs a serious punch and keeps the song-list shining brightly.  These past two songs are a little closer-suited to what I like to hear myself, and they’re at least closer to my own listening-experiences growing up; I think they represent the sound, their style and that entire era of music really well with their own updated take on a classic sound throughout “C’mon Girl” and “She’s A Dreamer.”

“Not Yet” is a good summation of the experience and a great medium that straddles the sounds I’ve heard throughout the past six songs right in the center.  There are some extremely fantastic moments in this final sampling of The Damnable Cads…for instance – how about the moments that Eddie summons the spirit of Dave Grohl for some Queens Of The Stone Age-inspired drumming in the midst of this monster rock track.  If anything…on this one I felt like the writing and the hooks are there, but I’m not sure if I would have kept the guitars up so much more significantly louder than the rest of the band, which it sounds like they are.  They definitely drive the song for sure…but it does sound like the instruments playing along with them are shoved slightly-off to the side of the stage while the guitars take the spotlight here, and I think the music of The Damnable Cads would become potentially even bigger if they were to thicken the low-end chomp of the bass and really get that production working in favor of the incredible effort that Eddie’s putting in on the drums.  Do that and I think “Not Yet” goes from being really damn good to being really damn irresistible; it has a Black Keys kind of pull to it…and Alvin at times nearly sounds like an aggressive, younger version of Bono…it makes for an interesting contrast and overall mix to their sound.

The Damnable Cads have only been around since late 2014…built around the core-concept that making music = girls, girls, girls.  I’d have to assume that here in 2016, were they not finding the ummmm, ‘success’ they were looking for let’s say…that they probably would have folded by now.  So in their hot-pursuit of the poontang – we’ve gotta at least assume that these rockstars are living the life they’ve always wanted to already with the amount of people listening to their music and sheer amount of potential suitable-candidates that would create.  Their music clearly creates a good-time and pure-rock atmosphere…and throughout these seven songs I think The Damnable Cads have proven to be not only a versatile sound that’s worthy of your time…but if their recent releases are any indication of the path their currently on…there’s gonna be some really great stuff to come from these four minstrels of mayhem in the future for sure.

Find out more about The Damnable Cads at their official page:  http://www.thedamnablecads.com