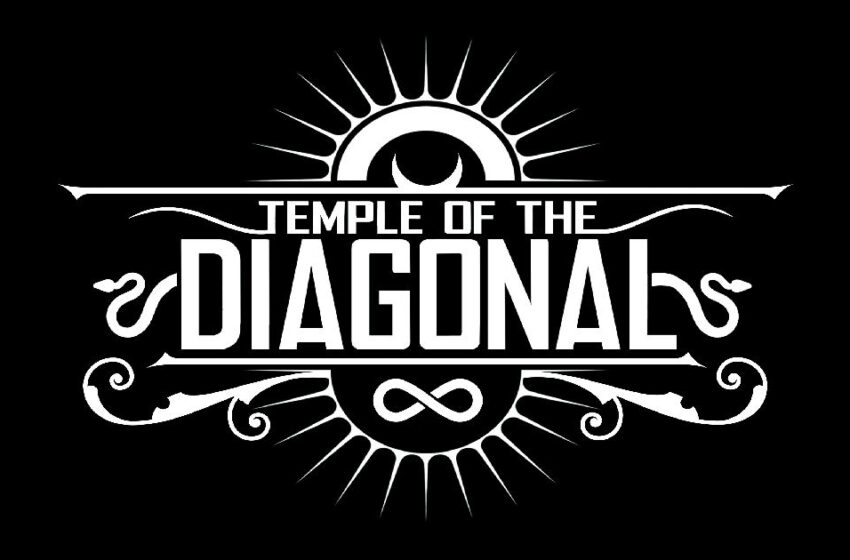 Finally – a project that musician Jesse Kazmer is willing to let me put his name beside!

That’s somewhat of an inside joke that y’all would have to be reading everything I’ve ever written & listening to every record I’ve ever written about to completely understand.  One of two players in this new band Temple Of The Diagonal, I’ve actually written about Jesse’s music several times over the years – but never have I once used his name.  That alone should tell you something folks.  From what I’ve heard, this band “will eventually be more than a studio project” – so there you have it, straight from the man himself…there are bigger plans in the works from the sounds of things.  Based out of Cleveland, Ohio, with a full record due out in early 2023, Jesse and his cohort Al Rossman are ready to make some serious noise with this new band, get all kinds of LOUD, and stand behind it with their names attached.

And I can promise ya…it’ll sound much better than the copy of “Pilgrim” I’ve got here…freakin’ YIKES y’all – make sure to check those files for those nasty sound spikes before sending tunes in or posting up!  I’ll forgive’em…they’re clearly excited & I don’t blame them – this sounds like music that’ll be an experience to remember, inside of the band, and to all us listening as well.  Anything mix-wise or rendering-wise all sorts itself out in due time, and I’m sure by the time this band is ready to roll that’ll all be fully resolved, so no worries.

Anyhow.  As teeth-clenching as sounds like this can be for me, I can still get to the meat of it.  I certainly get the excitement surrounding this band – Temple Of The Diagonal has a mammoth vibe & enormous ambition to match – “Pilgrim” is more than nine-minutes long.  It might start out with ambient sound that seems gentle enough…but let’s just say I’ve listened to more than my fair share of Kazmer’s music in the past and know full-well to expect that things will get gritty and loud, which they certainly do.  For the most part, the instrumentation leads the way through “Pilgrim” – and that’s a good call; these two really play their respective parts with authority & resounding confidence…that definitely counts a lot in my world.  I think it’s probably fair to say that the parts with vocals, end up lightening up the song just a bit more than what you’ll find outside of those moments…I ain’t talkin’ anything so extreme that it’s like the heavens open up above ya…hell no…but it does brighten the overall sound from the more dense & dark consistency the rest of “Pilgrim” seems to have surrounding those spots.  I really like the sound of the way they do the mix on the vocals and the echo effects they use around moments like the 4:15 spot, or the whispers shortly afterwards…Temple Of The Diagonal are very intuitive when it comes to how they choose to use their dynamics, and when to let loose a badass yell & such…the fans of the heavy stuff will dig on these guys for sure.  From the synthetic sounds in the atmosphere, to the gripping analog vibes included, there’s a widespread appeal to the style of music Temple Of The Diagonal is rocking with…and considering that fundamentally, you’d pretty much have to conclude it’s on the Progressive side of things genre-wise, anything that can be done to draw people in makes it that much more of a viable listen for the masses out there.  Personally speaking, I feel like the real hooks involved in this song are actually the strongest in their combined instrumental sections…the music not only hits remarkably hard, precise, and powerfully – but it’s like, extremely addictive too to the nth degree.  As I alluded to at the start of this review…or more accurately, how Jesse himself alluded to in that quote up top, Temple Of The Diagonal has plans to be more than a studio-based project, which pretty much leaves us to conclude that this band is preparing to take their music to the stage LIVE…and if “Pilgrim” is any kind of indication of what that experience would be like, we’d be looking at raw power up close.

From the grinding guitars, to the roar of the vocals, to the lighter-side of their sound that gets exposed through the synth hooks, “Temple Of The Diagonal” seems like they’ve got the stones to make their music a monumental experience, and a song like “Pilgrim” expand into controlled chaos when playing it live.  To me, that was the real underlying theme of it all here…that potential for what these two in Jesse and Al will go on to become from here…”Pilgrim” is where it all starts…and it’s as enticing as it is – but the hints as to what it’ll go on to be, are straight-up exciting AF.  Great ideas in the musicianship between them, there’s uniqueness in the vocals of Kazmer as always, and they’ve got some serious riffs in here that’ll blow your mind every bit as much as this song continually threatens to blow my speakers.

Consider yourselves warned!  Or at the very least, consider yourselves informed – Temple Of The Diagonal are coming…for those of ya that dig your heavy stuff, you’ll want them on your radar and definitely on your playlists – be ready.