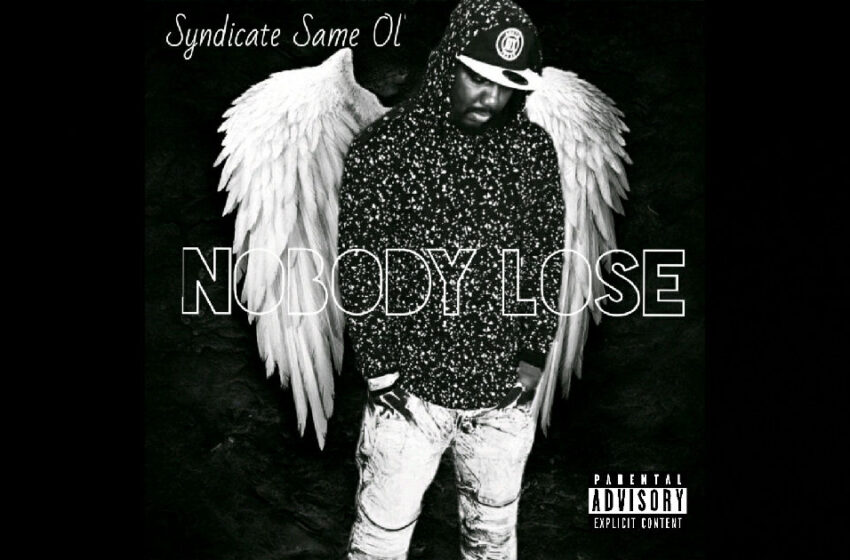 “I swear I wanna see you win no matter who you are.”

You listen to this single by Syndicate Same Ol’ and you recognize instantly just how valid his perspective is…and how the world could really use a few more artists out there with the attitude & mindset this dude has right now more than ever before.  “Nobody Lose” is a gripping mix of insightful wisdom and grounded relevancy…it’s genuinely heartbreaking throughout a large portion of the lyrics you’ll find – and the entire reason that is, is because they’re powerfully vivid and undeniably real.  Scene after scene, Syndicate Same Ol’ proves he’s more than capable of pulling us right in to see the world through a real perspective…the man is remarkably down to earth, straight up.  While there’s no doubt that what the man is rapping about here will take you through the heart of the darkness out there in society – perhaps the most key aspect to be found within “Nobody Lose” is the unbreakable spirit of an emcee that’s got the passion, skills, and a message that the people truly need to hear.  Like one of the main heroes and inspiration to this Austin, Texas-based rapper’s career…and I’d imagine LIFE itself for that matter – Syndicate Same Ol’ is keeping up the values of 2Pac alive and thriving to this very day through what he’s creating now in a song with the sentiment this cut has.  The idea that we can all find success and achieve our maximum potential…that the only thing that tends to hold us back IS us…and the more we drop the hatin’ the further we can start moving everything forward in the right direction again.  The man will take you all the way from the pandemic era, to hard times in the daily grind, to the loss of his own father (R.I.P., and condolences to you & yours homie), to important observations about systemic failures that are keeping us all held back from our true potential…Syndicate Same Ol’ has thoughts about it all more or less, and valuable insight that’s essentially laying out the blueprint for better days ahead.  It’s a solid example of leadership is what “Nobody Lose” really is – it’s about being fearless enough to get personal, being unafraid to put yourself out there…that’s what makes this cut connects – its undeniably sincere.  He makes an incredible point of how exhausting it can be even to see the movements, protests, and attempts to make things better day after day…it’s all well-intentioned of course, but it’s also a painful reminder at times of just how far removed we are still from balancing the scales of justice in this world.  So believe me, I get it – it’s important that we don’t give up, and really that’s the spirit that Syndicate Same Ol’ is still rockin’ at the heart of it all – but he’s right…it can be draining to battle on behalf of things that should just be common sense and resolved so very, very long ago already by now.  Until they are though – we keep that battle goin’ strong…every step counts – and this cut right here is one of’em. 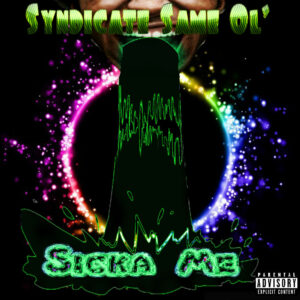 I’ll tell ya this much…the last thing you’ll find me copping to in this review is being any kind of “Sicka” Syndicate Same Ol’ y’all – “Sicka Me” is one seriously “Sicka” single, you feel me?  For real – this cut’s pure genius as well, but in a completely different way than the previous cut I was just checking out – and I’m lovin’ it!  Syndicate Same Ol’ flexes an entirely separate gear than he was in on the last experience, giving emcees out there a real reminder of what’s up, what’s real, and who’s truly packin’ the lyrical heat.  “Show me an opponent, I’ll show you a beatin’” – #TRUTH!  This dude spits on a straight-up other level altogether as he brings his best to the m-i-c on “Sicka Me” – exploding off the beat with personality, swagger, style – you name it, he’s got it locked down TIGHT – this cut POPS in all the right ways.  I’m all about it – if you’ve got skills like this, flex’em loud & proud until the whole damn WORLD is paying attention as far as I’m concerned.  When we talk about character on the mic, this is about the best example you can possibly point towards – Syndicate Same Ol’ is bossed UP, LARGE and in charge of every single syllable he’s spittin’ – and there’s simply nothing about this single that’s not absolutely impressive.  Not opinion y’all – facts as I know’em to be true – this guy could run circles around the vast majority of what’s out there on your playlists right now in any kind of similar style from Hip-Hop to Rap to Trap…”Sicka Me” is what it sounds like when an artist is at the top of their game with full confidence.  Talk about a fluid flow!  Once Syndicate Same Ol’ starts on his roll, it’s probably best you just get outta the way and let the man work his magic on the mic…he doesn’t let up on his bars, and delivers with precision, professionalism, and personality surging through the mic.  I’ll put it to ya this way – if I was to pull a quote, it’d just be the entire length of the track – AND…it’d be one of the most kickass things you ever had the privilege of peepin’ with those eyeballs of yours.  That being said – to HEAR this man in action doin’ what he does…we are talking about one seriously skilled mechanic on the mic y’all – “Sicka Me” roars with confidence through the verses, gets real smooth for the slick hooks of the chorus, and all-out proves this man is capable of bringing his A-game in any gear he shifts or transitions into.  I’m not here to tell you that “Sicka Me” is a BETTER song than “Nobody Lose” – I don’t there’s any way I can justify saying that, but I’m not saying that it necessarily ISN’T either, you feel me?  Different vibes for different purposes altogether, that’s the facts.  The real truth is that they’re both delivered as flawlessly as you could possibly hope for from the performance to the production – so believe me when I tell ya, you cannot lose no matter which cut you choose, and your favorite of the two would be entirely justified for whatever reasons you have.  Maybe you dig the message and serious weight of “Nobody Lose” more – I could make a case for that!  Maybe you dig the savage flexing of swagger & style of “Sicka Me” – that makes sense to me too yo!  The most you’ll find me conceding to ya, which I believe to be true, is that when it comes to the masses out there, “Sicka Me” has that much more of a degree of universal accessibility…which is…I mean…it’s awesome of course, but it’s also tough in the sense that the message of “Nobody Lose” simply cannot miss the ears its intended to reach…and in a perfect world, perhaps it’d be the other way around…maybe the message would BE the hook that brought people to the music, you feel me?  I’m not gonna be the guy hatin’ on verbal perfection though…that I can promise ya – you couldn’t ask anything more out of Syndicate Same Ol’ on “Sicka Me” – he basically reveals he’s superhuman here, and there’s not a moment on this single that would have you questioning that fact.

Find out more about Syndicate Same Ol’ at his official pages below!