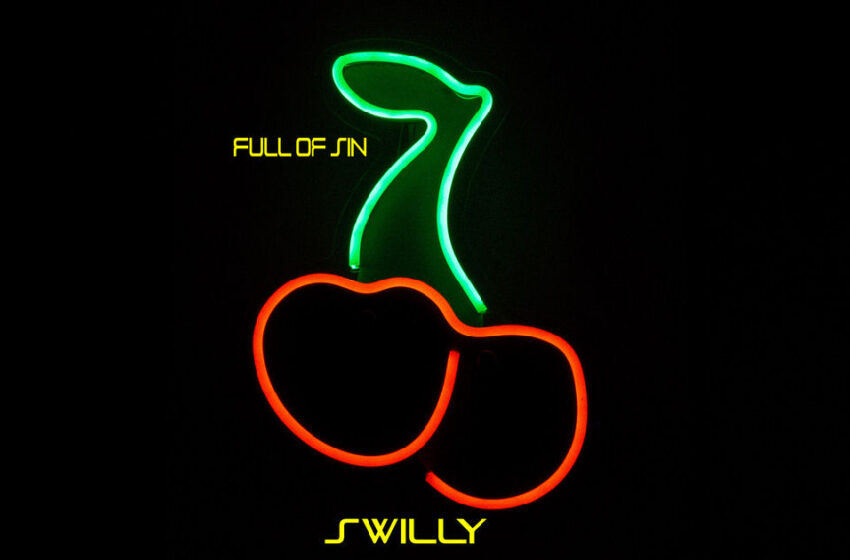 Hard Rock can be such a tough gig man.

Ultimately, there’s a lot to appreciate about what Swilly is crankin’ out into the world, and I’ve still got love’em, even if they’re a bit on the outside of what I’d normally listen to.  I’d say you’re lookin’ at listening to an honest sum of their influences on “Full Of Sin” – you can hear a little ZZ Top in there, a little Billy Idol…and probably the most noticeable on this particular cut, The Cult in the mix as well.  Swilly proves to be a sum total of much of what we’ve heard in the past, but they’ve got a solid party cut here that’s likely going to go down well with those out there cuttin’ it up at the clubs.  They’ve got that darkly danceable vibe inside of their music and the kind of flashy style & attitude combo that’s pretty much essential to making this kind of Rock work…and let’s face it, there are a ton of hooks in this single.

So what’s my beef?  Do I even have beef?  I don’t really.  The most you’ll find me conceding to ya is that after having a look at some of their titles from the past already…cuts like say, “Clusterfuck,” and “Hookers & Blow,” and albums like Size Matters and Kiss My Ass…ultimately I was thinking I was gonna be in-store for something a little more edgy than “Full Of Sin” reveals itself to be…but that’s no fault of the band, that’s just some preconceived notion of what I thought I’d find based entirely on what I was seeing.  That being said…titles & tunes like I’ve cited here also show how that shock value always has a gnarly knack of generating our interest by raising up an eyebrow or two.  “Full Of Sin” plays it a lot safer than what I thought I was going to be experiencing with Swilly, sure – but they execute strongly and deliver on what THEY are setting out to accomplish & create with their music…it’s not up to me or anyone else outside of the band to dictate what that direction’s gonna be.  I’d again cite The Cult as an example of what you’d find here in Swilly…because “Full Of Sin” similarly rides that edge of edginess without quite going far enough with it to really have it stand out as much as it perhaps should.  And don’t get it twisted – I freakin’ love The Cult when it comes right down to it…it’s more of a comment on how the rest of the world didn’t ever quite seem to grasp enough of what they were layin’ down overall.  We’re they great songwriters and a whole hell of a lot of fun at the same time?  Heck ya – and so is Swilly in that very same regard…they might not be pushing the envelope as much as they do on some of their other singles & songs by comparison, but there’s no doubt they’ve got a tight track people will dig.  If I had any advice, it’d simply be to embrace the fact that they’ve put out singles like “Hookers & Blow” in the past, and the more they take their music right over the top in that regard, the more it could pay off in the long run in separating this band from all the rest of what’s out there in the Hard Rock realm – but that’s not to say every song they’re ever gonna write has to be on that wavelength, nor should it be.  Y’all create what you create, we’re just here to consume it – I’m just relaying how we might be doin’ that is all…and calling it like I hear it, as I always do.  I personally think Swilly’s got more in the tank than they reveal here on this particular cut, but I think they’ve done well with “Full Of Sin” – that fair to say?

Musicianship-wise, these dudes clearly know how to deliver, and they play on a unified front.  Highlights for me in that regard…probably definitely looking at the guitar solos for sure, but the keyboards were equally rad & all-out essential to this track as well.  The rest is strong…drums have energy, vocals have identity, the bass is punchy…the fundamentals are all in the right places where they should be, and now it’s just about fine-tuning those extra details that are gonna keep’em firmly out of the sea of sameness.  With the sense of humor they’ve got in their band and their penchant for innuendo, sometimes subtle like you might say you can find in pieces of “Full Of Sin,” though for the most-part, they’ve played it much more straight-ahead this time around – and sometimes obviously much more in-your-face as I’ve pointed out & cited in other tunes – the bottom line is, they’ve got their own innate ability to shock & rock at the same time…the more they embrace that and go all-in no holds barred, the more I suspect they’ll stand out in a way that their efforts and musicianship deserve.

Find out more about Swilly from their official website at:  https://swillymusic.com