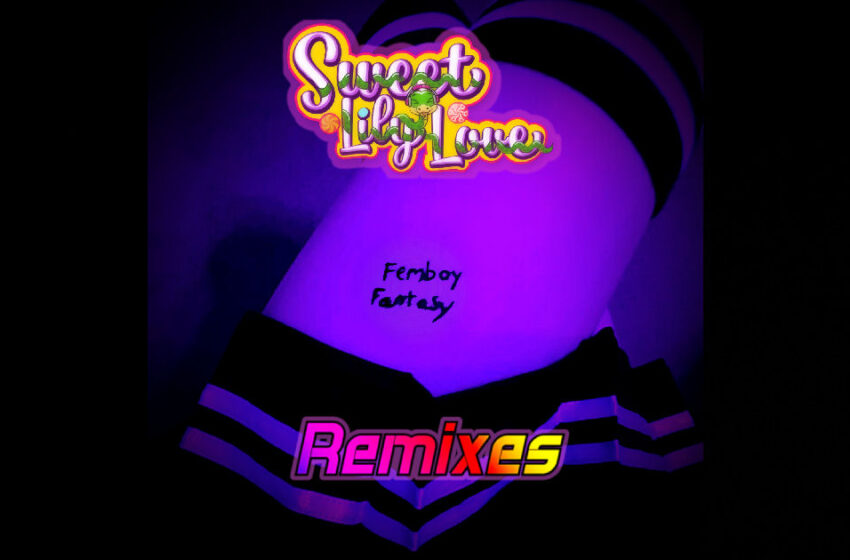 
If you’re looking for that jolt of energy first thing in the morning, you can count on Sweet Lily Love to be the one to supply.  I mean, let’s be real here – every single cut from her summer EP called FRESH!, that we reviewed back in June this year, was filled wall-to-wall with experimental audible caffeine – and it’d just be plain silly of me to expect anything different, right?  Energetic vibes are what Sweet Lily Love is all about…and we wouldn’t have it any other way.  Maybe one day she’s rock a slow jam for ya, you never know!  I ain’t saying that it’s not possible, but from the sounds of things so far…hmm…probably very unlikely, how about that instead?  Word on the street is that she’s just dropped her Femboy Fantasy EP online this October, a couple days back on the 24th – it’s got four variations of the single she’d released earlier this year, which indeed, includes the two I’ve listed in the title to talk about today.

I actually had a listen to the first version to check out where it all started…and I can wholeheartedly say that, if you enjoyed her previous record FRESH! there would really be nothing stopping you from digging into “Femboy Fantasy” in any of its incarnations either.  Sweet Lily Love has got her thing, and it’s quickly become a signature style of vibe…wildly upbeat, full of Electro-driven juice that bends towards the 8-bit sound, and usually a pounding beat that’ll show your speakers no mercy when it starts to get things moving.  I like the beginning of this cut to tell ya the truth – you actually get the history of where Femboy culture originally started, and what it’s morphed into today.  It’s pretty interesting to hear how often it’s been misunderstood to equate to being gay…when you hear the whole explanation of what a Femboy really is, you clearly understand that it’s much more of a celebration of femininity in general.  Which of course, is cool!  Rock those dresses and skirts and socks and whatever it is that makes you feel like YOU I say…that’s all that’s ever gonna matter to me, and hopefully, that’s all that ever matters to the rest of ya as well.  Life’s too short to worry about who’s wearing what and for what reasons they do.

As far as the “Remastered 2022” version goes…I’m not opposed to it…I think I’d probably have to come to the conclusion that, while it might sound a lot brighter & bolder, the song itself was solid right from the get-go, and delivered in that Sweet Lily Love style you’re familiar with.  The melody in the vocals & music works…she’s as rambunctious as ever, but to be fair, she’s actually added in quite a bit throughout this 3:49 that gives “Femboy Fantasy” an all-inclusive, varied vibe that has a range of dynamics to it.  I think my favorite moments are probably the musical hooks that generally end up following the vocals – I do like the way the singing is added into this song, I’m just saying that the melody of the music was a really unique & innovative way to follow those moments on the mic up with like, an extra BONUS hook.  I think we all kind of get caught up in expecting that, whenever vocals are present, they’re kind of responsible for the majority of the hooks we consider memorable, in any artist’s or band’s material – but I felt like “Femboy Fantasy (Remastered 2022)” makes you consider the opposite scenario to be equally true – sometimes, when you do it right, it’s actually the musical notes you’ll be singing around the house and this cut is a perfect example of how that can happen.  All-in-all though, it’s a good track that continues on defining the Sweet Lily Love sound in a way that’s sure to satisfy all her existing fans.

As far as the whole multiple-variations of one tune on one record thing goes…don’t get me wrong, I’ve been there, I’ve done it…and under the right circumstances, I’m sure I’ll do it again – but I’ll admit that I’m much less inclined to do that these days than I was back when I was a kid paying $19.99 for a CD single that had four versions of the same song.  I think it all follows the general rule of, if you like what you hear, and you know you want more of that, then MORE is always gonna be a good thing, of course.  You end up looking at releases like the Femboy Fantasy EP as stuff for the real fans out there.  As a publisher once said to a dude I knew who had written a trilogy – “how do we know you can even write ONE book, let alone three?” – which is kind of how anyone else might view something like four tracks of the same song going into the experience, without knowing what they’re in for.  Visually daunting in that regard…that’s what I’m saying…long before anyone’s pushed play.  Ultimately, fan or not, in a lineup of four cuts that feature the same song, we’ll all definitely want to hear that variation between each version – it’s actually outright crucial in this scenario, otherwise you risk burning out the original song at a rate of 4:1.  Clearly there’s always some risk involved when going this route…that’s all I’m really saying.  At the end of the day, personally, I felt like Sweet Lily Love definitely did enough to change things up on this 2nd variation of “Femboy Fantasy” with the “Femboy Hooters Epic Remix.”  It’s longer, arguably even stronger…and I like the rearrangement here, it works well.  Overall, I’d tell ya that there’s more of an audible ‘fantasy’ element to this second version of “Femboy Fantasy” – and for me, that seemed to drive the whole theme, sound, and vibe to even more enticing results.  I know I would have missed the explanation of Femboy culture if it wasn’t in there somewhere, so I was stoked to hear it show up eventually in its different spot…and I liked how Sweet Lily Love plays around with time & tempo with the extra room she has in this version too.  Her production is bang-on…her multi-faceted audio-expressionism continues to make a sincere attempt to include freakin’ everything under the sun through a series of cuts & shifts into different directions…it’s always going to be somewhat demanding on the everyday listener with the core of nuclear energy that Sweet Lily Love unleashes at the heights of the joy & madness in her music – but for those of us that like a whole lot of sound & style within the tunes we listen to, she’s ready & willing to supply!

Find out more about Sweet Lily Love from her official website at:  https://sweetlily.love