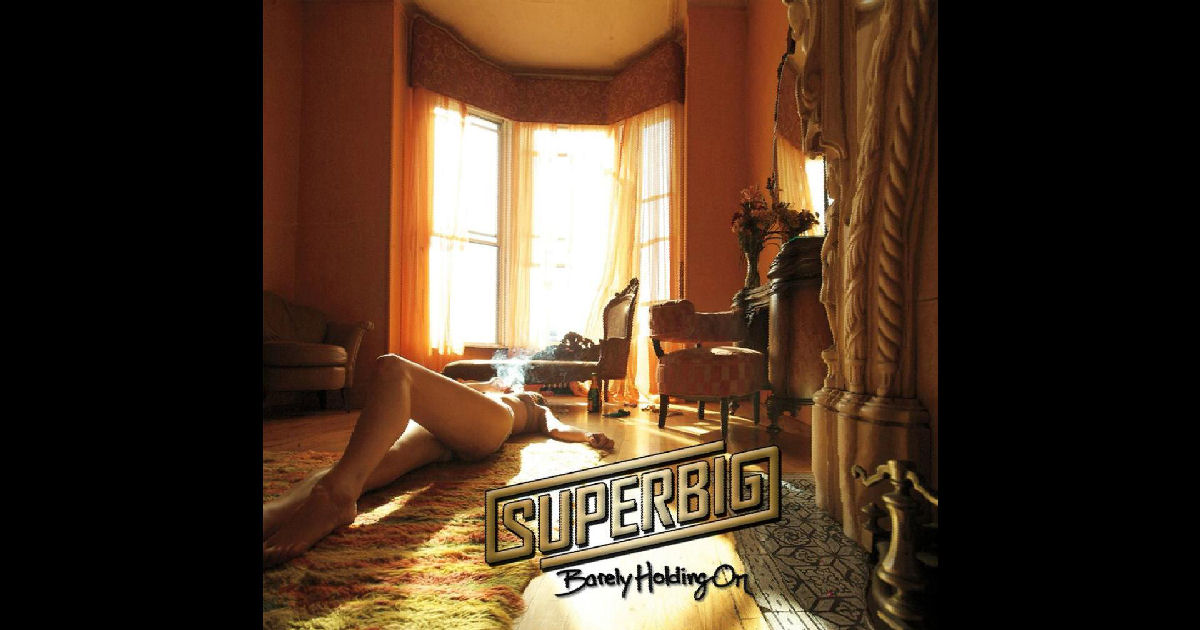 In the rock-world of double-entendres, you gotta dig the title of this new single “Sideways Love” by SUPERBIG.  Musically, there’s many more reasons to appreciate this cut from the Chicago five-piece, I’m just sayin’ that from a straight-up literary & songwriting aspect, they already had me grinning just from thinking of all the potential ways that people could take the meanings behind the lyricism of this tune.

“Sideways Love” comes from their brand-new record, Barely Holding On – and it’s a brilliant choice as a single to put out there to audibly entice people into the rest of the album.  Massively impressed with the songwriting & structure here – they’ve not only written the living daylights out of this one, they’ve played it with genuine passion that you can hear and clearly given every moment everything they’ve got.  There are multiple hooks in the verse, in the chorus, in the surrounding instrumentation, solos, breakdowns & bring-backs…I mean, if we’re talking about the value of a song when it comes to ideas and performance, you just can’t argue how amazing “Sideways Love” really is.  There’s a MASSIVE amount of crossover appeal and widespread accessibility in the sound of “Sideways Love” – SUPERBIG has written a song that’s powerful & moving even in its most gentle moments and absolutely riotous & inspiring at its maximum strength.  It’s got that similar flashy style that you’d likely find in a band like The Killers…the hooks are almost ridiculously bulletproof when it comes right down to it…it would take a special kind of steeled resolve to resist “Sideways Love,” and like, why on earth would you want to?

Maybe a bit of room to still improve in the production & clarity of the mix, but it’s really not far off at all.  As I’ve said many times, it’s all about the ideas…that’s what’s always going to be the most important in an online streaming world.  If anything, I’d suspect that SUPERBIG is going for that sound that so many seek out in the studio – the ol, ‘can we try to get our live sound on the recording’ – which is, as many of you out there know, a really damn tough thing to do.  Point being, there’s an element of rawness in the mix here that kind of plays into the atmosphere in a way that works in their favor…it only seems to show up in the biggest moments of the song, where the madness of the energy in the vibe they’ve created is strong enough to set your speakers ablaze.  Elsewhere, in the song’s more subtle moments, that clarity exists perfectly and the mix is bang-on…if anything, that kind of further proves the point about just how GIANT the hooks that SUPERBIG have created in this song’s chorus…the more amped-up they get in the music, the harder they are to contain.  With great power comes great responsibility, as they say.

When it comes to tight songwriting and well-crafted ideas, you just can’t lose here.  Jim Fountalas completely stands out with a killer performance on the vocals, with just the right amount of edge, rasp, and badassery coming through the microphone to match the music’s every move.  Dude sounds great in the most sparse moments of the song musically and when “Sideways Love” fires-up, he brings it without hesitation.  Not sure who is responsible for that…I’m not even sure, could be a classical-acoustic guitar, right around the 3:20 mark…that’s freakin’ gold.  Backing vocals from Pat Senorski and Chip Znuff also make a huge impact in the atmosphere and they complement the lead from Jim extremely well.  Dan Hill is a beast of consistency back there on the drumkit, perfectly metering this cut out and hammering it home whenever the song needs to spring into that next transition or switch in its energy.  Technically, this band’s got three guitar players…Ricky Lyons, Jim, and Pat…so obviously I’ve got no clue as to who the heck is doing what, but I can tell ya I’ve certainly got no complaints – they rock.  I’m just sayin’ for the record once more – that moment at 3:20 gets the gold-star…so whomever is responsible for THAT, then the other guys in the band have to buy that ONE dude a beer each.  Only seems fair to me.

That being said, the point ultimately, is that they all really deserve credit for creating a great tune, certainly a single-worthy one.  “Sideways Love” heads from an isolated & magical Jimmy Eat World-esque beginning and flows straight into the wide-open & welcoming sound of something as big as The Killers…maybe even just a hint of a Robert Smith influence in there somewhere at the core of singer/songwriter Jim as well, just a bit more noticeably aggressive in his artistic pursuit & passion is all.  With incredibly uplifting energy and a highly memorable performance from all concerned, SUPERBIG gives you an enormous amount of reasons to listen to their new record on this lead-single – I’m definitely impressed with ideas, writing, overall performance & the insane amount of potential that exists in the future of this band.  I’m stoked to hear more from SUPERBIG – you will be too.

Find out more about SUPERBIG and their new album Barely Holding On at their official page at:  http://www.superbig.us/