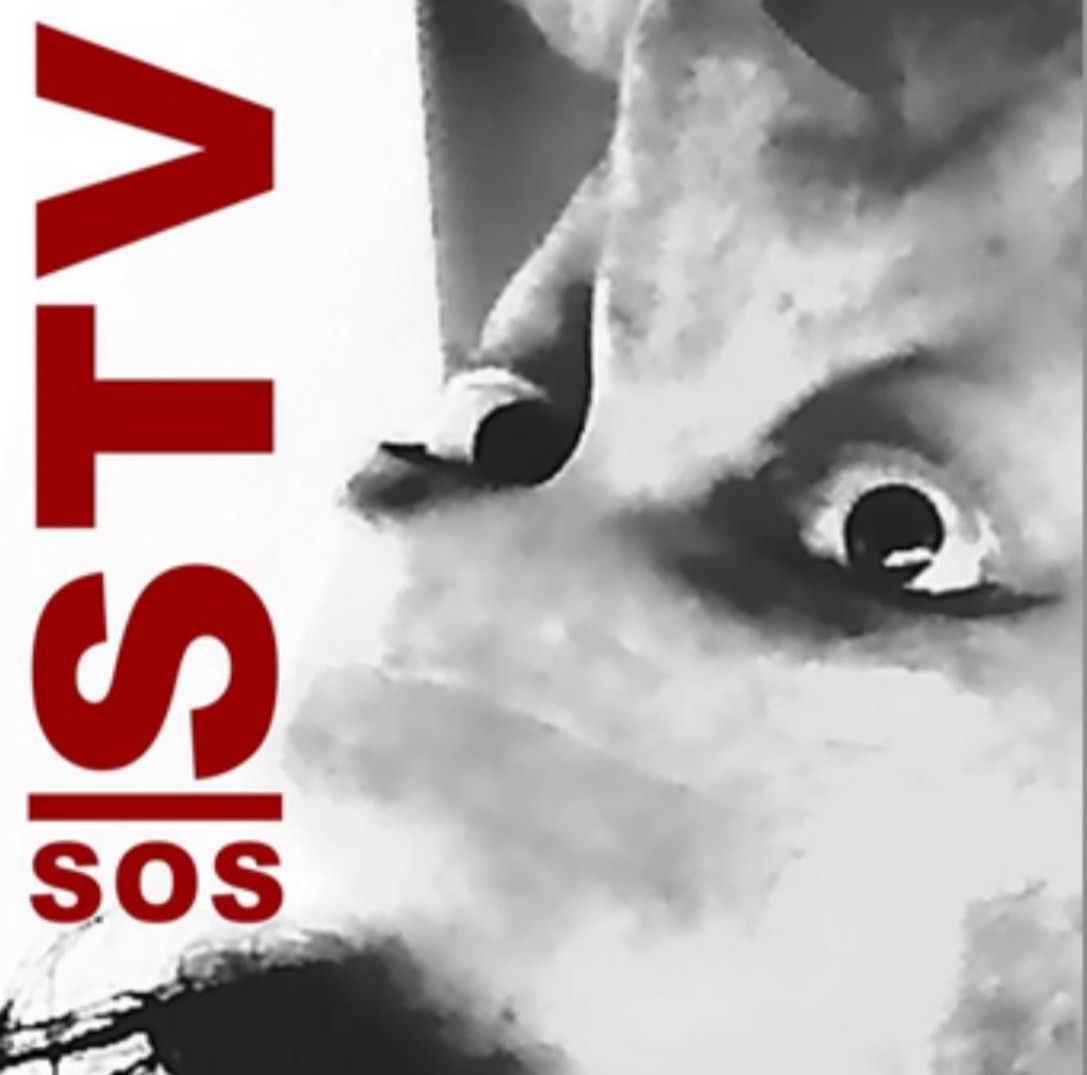 No pressure here STV…but it’s my birthday…so…know that I’m going into this with the expectation you’ll make it a happy one for me!

Not that I’d necessarily expect the subject matter, moods or atmospheres to necessarily be laden with joy…not when it comes to the emotional-textures you’ll find in STV’s music, no…just that it’s of the same quality or better than when last we reviewed this innovative artist when it comes to the music overall on his new album SOS. That…is not too much to ask on one’s birthday I figure.

And I do expect big things from STV…I know he’ll take chances…I know he won’t just play it safe like so many out there do. There will more than likely be triumphs…perhaps maybe a few pitfalls along the way…but at the end of the day I have a large amount of faith that STV is born of the right stuff to deliver the birthday present I’m hoping for today in opening up this album. With the subtle electro-groove that begins “Hidden In The Dark,” I’m already his to lose; this opening melody-line from the synth alone has a massive amount of gravitational-pull & hooks to listen to. As it plays on it breaks into a musically-bare verse where STV takes a gentle approach against a subtle-beat and nearly nothing more. He sings with emotion…like a young Bono in many spots; as the beat picks up, so too does the expression in his voice – and the keys to “Hidden In The Dark” really working actually come down to his performance. I mentioned how he wouldn’t play this safely already and this is exactly what I mean – he could have easily, EASILY, ridden out that synth-hook over the course and delivered a song that would be easily accessible to all…but there’s much more to the art & craft of music to STV than just doing what’s easy.

As an artist…you have to take those chances. Where STV is winning big-time is on a track like “The Rising Light” – an extremely powerful tune on SOS. Not only is the music phenomenally complex in its combination of sounds, ideas and structure, but he’s pulled it all off really well through the mixing and transitions through the defined parts of “The Rising Light.” As impressive as the piano-keys, guitars or writing in the percussion might be, it’s the performance from STV on the vocals that really brings this one home. “The Rising Light” has an atomically-emotional chorus that is set right off through the amped-up performance and energy that STV brings to it; “The Rising Light” was an early favourite for sure.

Performance-wise though…it might not get any more committed, stylistic and captivating than what he’s captured on “Rock Is Dead.” This isn’t like every other ‘rock is dead, dying, decaying’ or anything else where the music being played is STILL rock (oh, the irony!) in behind the message; this is as true to the title as it can get with “Rock Is Dead” being played sparingly with electro and a true-performance from STV on the vocals. It’s dramatic, it’s theatrical…it’s on-point…the final run through the melody at the end around the four-minute mark serves as a highlight – but truly it’s the whole performance of “Rock Is Dead” that really deserves credit. You won’t often find artists as daring as STV in terms of how they’ll put themselves out there…quite often he shows the genius of a Thom Yorke at times with his approach to vocals and the operatic-nature of the tones, at others like on “Small” he heads towards Beck’s territory. “Small” is to this point, the more anomalistic of songs on the SOS record…but there are some incredible moments that really set this one up for entertainment through the dynamic shifts in the music…and lyrically some of the sharpest points he’ll make. The chorus of “Small” was admittedly my favourite part…but that’s because STV has an extraordinary grip on exactly where to place the most kickass of piano-notes anytime he seems to want to choose!

The second in his trilogy of albums, SOS continues to find an emotional-vein with “Tremors” being one of the more soul-baring/revealing tunes on the record. I dig this combination very much…I can hear an argument for this one being a little less-focused than some of the rest in some ways with the range of ideas being housed in this track finding a widened-spread. I’d counter with that the melodic-parts of “Tremors” sound raw, but REAL and performed with convincing emotion you can feel. I’d say that the electro-parts where the music becomes deadly-serious and darker than the lightened verse will melt your face with awesomeness. And if it wasn’t for the incredible way that the wall of electro crashes into the melody at the end of the song as perfectly as it does, I might have argued on behalf of these two defined parts really being more like two songs separately…but that ending really hits the mark hard & perfectly at the end of “Tremors” and makes everything that happened before it all of a sudden make perfect sense.

Lost me a little bit the “Last Train Home” – I am afraid I found I could not ride along on this one. I feel like I get what STV is attempting and going for on this one somewhat – but I also can’t help but feel like the execution of the idea shot just a little wider of the mark than he was looking for. Musically, it’s pretty sparse and minimal…the atmosphere he’s set in “Last Train Home” could potentially work – there are great electro-elements and effects that pop in & out, but vocally I felt like STV spent more time off on this one than on. What I don’t quite get is that he’d clearly know the difference between when he’s nailing it, and when he’s not…so everything I’m hearing would serve a purpose…but I’m not so sure I connected what that might be on this one through the vocal-approach. I expected a few experiments and a few chances to not totally gel with me along the way…but truthfully, up to “Last Train Home” I found each of STV’s ideas to be really well-executed once again on this new record. There are moments in “Last Train Home” that could be extremely powerful with his more reliable style found in the first tunes, or like on “You Should Make Other Plans” to follow. A truly stunning melody and brilliantly-executed rhythm & flow – “You Should Make Other Plans” would definitely serve as the most accessible tune on the record in many ways. With its convincing emotions bleeding right in front of you, “You Should Make Other Plans” is lyrically sharp and musically potent; a seriously subtle groove that packs an immediately memorable impact.

The intense but spread-out atmosphere, sound and build of “Such A Woman,” the final song of SOS, is similar to the emotion and magic you’d find in bands like Sigur Ros, U2, or in Spiritualized. Perhaps the most stunning performance on SOS, “Such A Woman” is as chilling as it is beautiful…the vocals are part singing, part poem and delivered in crystalline-tones that drop like icicles falling into the music, shattering open with truly sincere emotions that simply cannot be faked. “Such A Woman” is a true epic…the mix of dynamics between its loud/quiet contrast creates the most captivating moments you’ll find on this record and STV absolutely nails his biggest homerun right at the end of this album.

THAT…is the kind of birthday present I like to receive! What started beautifully on his debut album VCR continues strongly here on SOS. Art & music combine beautifully here through the melodic ways that STV works the magic in his music…SOS delivers some of his strongest material to-date and absolutely has me looking forward to the conclusion and what he’ll come up with next on the final record of the set still to come called FIN.  Stoked on STV!