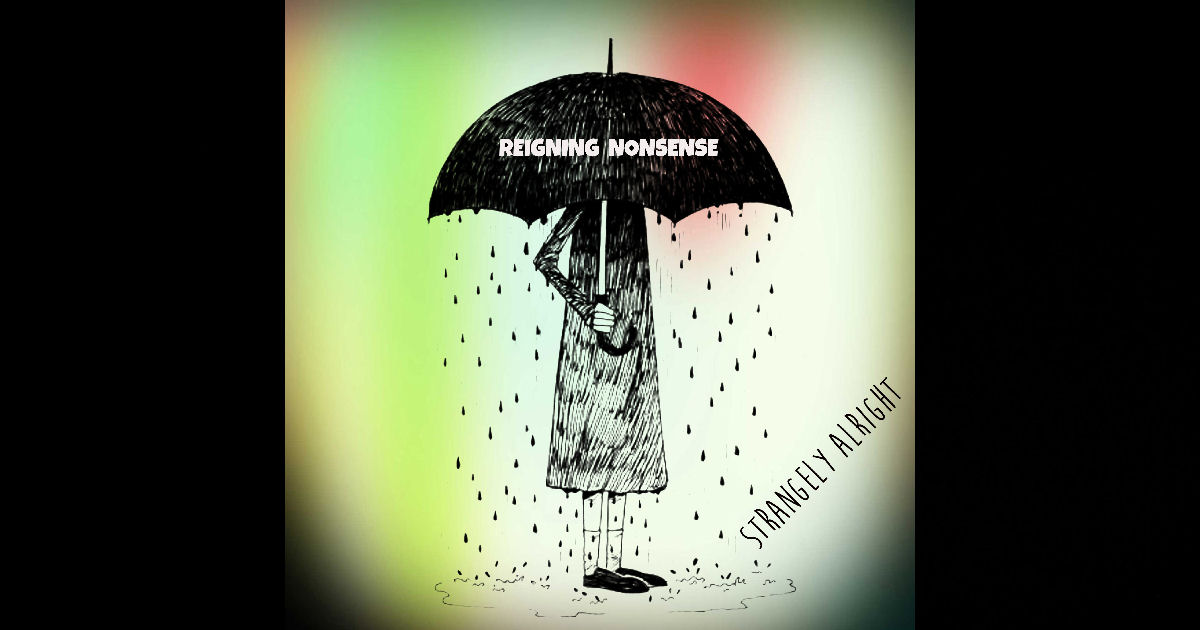 I’d hang out with these dudes.

Strangely Alright…might be selling themselves a lil’ short – you factor in the fun you have with watching their latest video for their single “Reigning Nonsense” and at the very least you gotta give’em credit for being just a bit more than Strangely Alright…this is actually pretty rad stuff & definitely anti-typical.

Like, I’m pretty sure I just saw Spiderman sprinting across a field in their new video…how cool is that?

As the title would imply, Strangely Alright has clearly made a point of not taking anything too seriously when it comes to the loose vibe & grooves that come along with “Reigning Nonsense.”  That ain’t to say it’s not a tight tune & well-played – it is – but you’ll hear what I mean…maybe laidback is a better term.  They ease you into the hooks through a fantastical realm of sound that’s designed to be artistic, flashy, and genuinely catchy; sure they’re a tad bizarre, but there’s no doubt that what they’re doing, works.

Again, especially if you factor in the video.  Not only is “Reigning Nonsense” really well shot & edited & all that, but the main stars of the show in Strangely Alright certainly aren’t camera shy.  They get right into this tune…some in costumes, some in makeup, some that just have badass beards that speak for themselves – the point is, Strangely Alright has clearly embraced the lighthearted spirit & attitude the song calls for onscreen as well, making this single a solid double-threat when it comes to entertainin’ ya.

This five-piece band out of Seattle definitely has no problem at all drawing on some of those good-good Psychedelic-Pop-Alt-Indie-Garage-College-Rock vibes, know what I mean?  I suppose that’s a roundabout way of saying you can’t pin these guys down – they’re Strangely Alright, what else do you need to know?

They do have a bit of an updated U2-thang going on…somewhere around the like…Zooropa and Achtung Baby! era…maybe toss in a bit of The Dandy Warhols’ (any era) loose grooves & fun vibes in there for good measure, bake at 350 for 4:20…and voila, just like that, you’ve got “Reigning Nonsense” – I think?  Alright…there’s probably a bit more to it than that…but you’ll find the similarities I’m referring to in the soaring chorus and sparkling hooks that run through “Reigning Nonsense” – it’s stylistic fun, that’s what I’m sayin,’ I suppose.  It IS catchy, there’s no doubt about that.  While I ain’t gonna lie about the video raising the appeal of this tune to a much more memorable status – there’s no question that the hooks they’ve put into “Reigning Nonsense” are bound to hit their intended targets in listening ears out there.  You could also point to acts that contain wildly hybrid sounds like Supergrass or even David Bowie too when it comes to the flair & added theatrics you’ll hear in the adventurous spirit of this new single – and believe me when I say, you couldn’t possibly miss these aspects of the band when it comes to the video.

All-in-all, I’m certainly not complaining…like I said from the get-go, I’d hang out with these dudes and they’re all welcome to crash on my couch any time…Strangely Alright seems like my kinda people.  Plus they make themselves a solid tune, play their instruments well, have great balance between the strengths in their band, and seem like they’re having a whole lotta genuine fun in doing what they do – you know I’ve got love for all that as well.  So know that it’s not JUST the incredible beard-work – there’s more goin’ on in Strangely Alright than a barber’s delight – they write & perform with a creative flair that reveals they’ve got a true love for the game they’re playing – and that they want us to play too.

No objections from me – these guys are good-times – find out more about Strangely Alright at their official homepage at:  www.strangelyalright.com