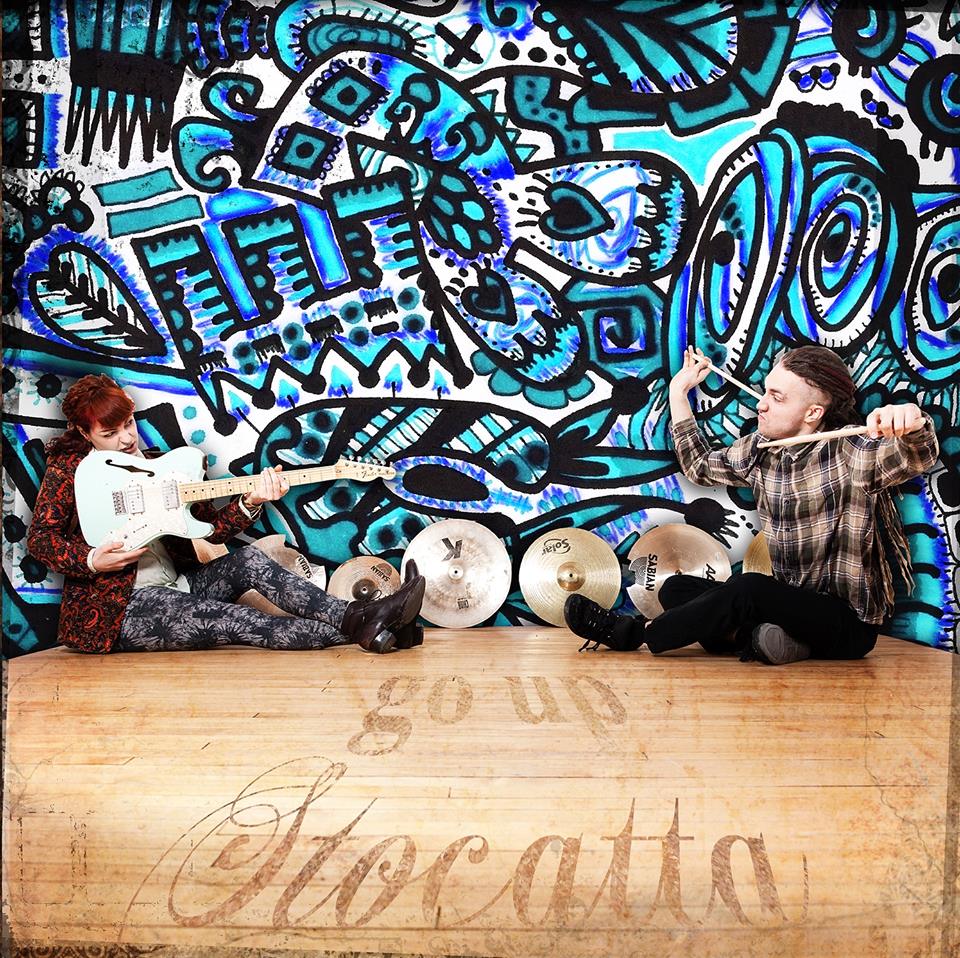 Ever since I reviewed the Stocatta single “My Love Leave” I’ve been anxiously awaiting to hear what might come next. Knowing that there was a full album to come out just around the corner…it wasn’t long at all before the new set of songs on Go Up found their way back home to us here at sleepingbagstudios. This extremely talented Canadian two-piece seem to have found a sound that works perfectly for them here on this new album; one that allows them both to express themselves in full through their music. The unity between them…that shared musical vision…it’s something you can easily hear on Go Up – these two are absolutely nailing it here and confirming all the talent I promised you was there before in my previous review. I knew Stocatta wouldn’t disappoint and they’ve gone on to exceed even my own expectations here on their new release.

As the album opens with a smooth acoustic beginning, lead singer Laura Artus comes into “Here Comes The Fire” perfectly. You’ve gotta understand the sheer talent of this woman…the massive potential that is realized here on this album, Artus delivers in full every time whether it’s beautiful melody or a vocal-explosion. I’ll put it to you this way – she reminds me of three of the greatest names I’ve ever known in any genre; Tanya Donnelly, Kristin Hersh and Annie Clark. PONDER THAT in your brainwaves for a moment there…Donnelly and Hersh might have had their day – but there’s no more of a relevant musician working out there today than St. Vincent’s Annie Clark; and potentially – I think after hearing “Here Comes The Fire,” we could have another Annie Clark-ish genius right here Stocatta.

Between herself and the other fifty-percent of Stocatta in Jay Smith – these two have managed to put together music that is inventive, creative and with all the dynamics, theatrics and dramatics you could possibly want in this music that you’d never expect was only made by two people alone. The jazz/rock elements of “One Moment” and its brightly-bursting, heavily-defined parts make for one gorgeous song through the subtle jazz-pop sound and one massive wake-up call when they bring out the rock.

Alright…so what I’m NOT going to do to ya…is yak your faces-off about their single “My Love Leave,” all over again…you can read that here. Let’s just say it was a welcome song to hear once again, one that I easily recognized from my randomized playlist containing their single that I play here STILL all the time. What else can I say other than to point out they’ve written material that leaves a lasting impact every single time they push record? I happily listen to Stocatta out of sheer celebration of great music I personally love.

I suppose what I COULD say regarding “My Love Leave,” is that it’s really not as outstanding as I had once thought. God…that sounds cruel…I should really explain that comment…  What better time than now to leave you on this cliff-hanger and let you listen to some new music from Stocatta as you scroll on down to find out what the heck I meant….  Tee-hee!

What I mean, is that the entire body of work and music you’ll find on Go Up is just as fantastically impressive. I honestly couldn’t have chosen a single to put out between any of these first three tunes of incredible quality, and I instantly felt the same way when “Signs” began; ANY of these songs could potentially put them on the map – they deliver astoundingly clear, clever and melodically-intense all the way through their album here and it’s beyond impressive.

As “Falling Into Something Soft” began I started to fall in love all over again. This one plays something like the sound you’ll find on the second Zero 7 album…it’s a perfect mix of jazz/pop/rock/expressionism and completely captivating. The hollow & distant sounds of the verse and guitar are pure-beauty; Artus puts out some of the most outstanding vocals you might hear this year right here on this song and delivers them with style, grace and confidence that will make your whole soul smile.

The main thing I keep coming back to when I think about Smith and Artus in Stocatta is just how amazingly solidified this music SOUNDS. It’s like the band is made up of two Siamese twins who’ve been born apart but connected by their souls since the moment they existed. Listening to these two connect like they are here on Go Up is extraordinary; a true window into something indescribably beautiful.

With a track that’s right out of the Throwing Muses or Belly catalog, “Around Here” is another excellent example of the way that Stocatta can range from the dark to the light in a single song. At times playfully-pop, others explosive-rock, sometimes subtly jazzy, others exploring alternative vibes…Stocatta lets themselves loose here a little more theatrically here on “Around Here,” creating a song that has a throwback sound I’ll never get enough of when it comes my way.

The complexity that these two can achieve is awesome; almost like they challenge themselves specifically to not fit into ‘the norm’ at any time. The way they switch through “This Boat” make for a real ‘musician’s-highlight’ on this album; the kind of song that is simply a pure joy to listen to for the intense song-writing and creative structure & assembly before even hearing how it’s actually performed. There’s a ton to listen to on “This Boat” – it’s a complete standout and great representation of just how entertaining these two can be. The standout ability of Smith and Artus chalk up another incredible win here on this song.

Darkening it up just slightly by adding a little bit more of an edge through the tone in “Voices On The Radio,” I’d say about 95% of this track worked extremely well for me. It’s been the only time I’ve questioned the choices of Artus and Smith even remotely…the chorus on this song is massively tough to pull off…the ambition is there for sure in what is clearly a reach in creativity and sound between these two. Musically I think this track is right where it should be all the way to its chaotic, crashing-end…it’s only a couple of spots that I’d question at all and minimal enough in the grand-scope of this album to the point where you’d wonder why I’d even mention it at all by comparison.

Making all the right-choices and more in the final track “Colours Of The Day,” Stocatta puts in one more excellent song before Go Up completes. As much as I like the performances on this song recorded, picturing what this particular song and their particular sound might be like in a live-setting has sure put a smile on my face. I think Artus has a real ability to do absolutely incredible things with her amazing voice…and to hear it recorded here on this final song “Colours Of The Day,” makes me wonder how she pulls it off live as well. My personal bet…is that you’re in for something extraordinary & different each time she grabs that microphone…she has excellent instincts for improv-vocalizations and I can only imagine that those truly come alive even more when Stocatta hits the stage.

That being said – “Colours Of The Day,” smartly concludes Go Up, an album with a truly kickass experience in a sound that’s relevant, comforting and inspiringly emotionally complex. I wouldn’t throw around the St. Vincent comment without meaning it dear readers…Annie Clark is pretty much the Holy Grail of music for me right now, so believe me when I say that the expectations I have for the future of Stocatta are massive and that their accomplishment here on this album is nothing short of incredible. There’s a real harmony & genius that these two bring out in each other; the result is one beautiful combination in sound…one that I’ll always be reaching for.