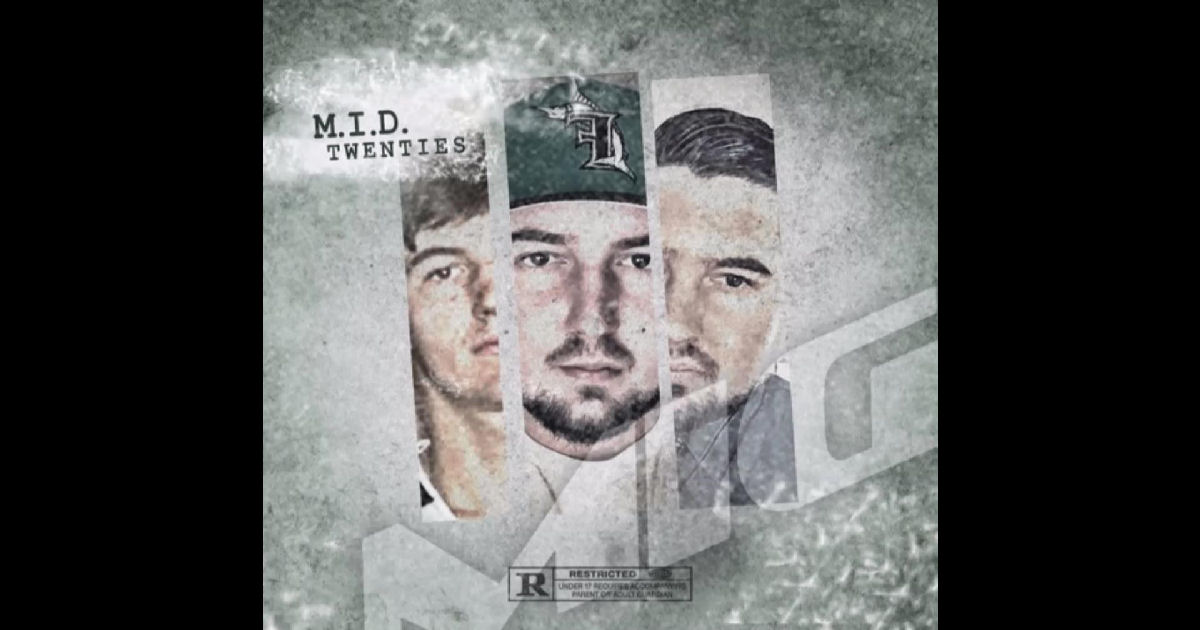 “Just let me have my own island.”

For reals world…give emcee Steve Cook a break will ya?  He’s clearly not asking for much.

Alright…so…pretty clear that if you were able to get a sneak peek at Steve’s Christmas list you’d find a pretty damn tall order waiting for Santa to deliver.  You might even feel like a personal goal of eventually having your own private island might be too much to ask…that Steve’s dreamin’ and has his head in the clouds.  I’ll admit, having my own island hasn’t crossed my mind before…so maybe there’s some truth in that; we might have caught Cook wishing for the future to become his reality.

But what if I told you that, the biggest assets in Steve’s rhymes is just how down-to-earth and relatable they are?  Well…you’d probably start warming up your private jet and dreaming of that island yourself now wouldn’t you?  Cook might dream big…certainly nothing wrong with that at all…but you’ll certainly notice that the man is grounded over the course of these three new singles we’re checking out today.

These cuts looks like they came out just over a week back – but they’ll be plenty fresh for a long time to come.  Steve’s got a real classic & stylistic approach to Hip-Hop, plenty of audible skills on the mic, and insightfully personal and thought-provoking lyrics that seemed to get more real as the playlist went on.  I dig the smooth vibe on “Walk With Me” – solid first impression from Cook in the atmosphere of a jazzy beat that gives him plenty of space on the bars to make an impact.  I really like the tone of Steve’s voice – I’ll definitely admit from the picture/artwork posted up at his Soundcloud page, he looks like he’s still plenty young – but I was really impressed by just how much wisdom it sounds like there is behind these words.  Again…I think that you’ll see the lyrical aspect improve steadily over the course of these three cuts, but there’s certainly not a thing to be criticized about the way he flows through the words on “Walk With Me.”  After listening to all three cuts, it becomes pretty clear that Steve’s got many angles on Hip-Hop…and it’s going to be up to him as to which of those he wants to pursue in order to set himself apart from the rest out there.  You’ll hear from the sick flow in the words on “Walk With Me” when he’s arguably at his calmest, yet still intense and going after every syllable with serious focus, that he’s kind of straddling worlds right now.  He’s at that point where he’s searching for what works and where he fits into this whole music-game…a feeling I know all-too-well that many of you out there can relate to.  When he’s keeping it real and relating the personal-side of his thoughts – I think he’s got a verifiable magic on the mic that could carry him as far as he wants to go; the more he heads into the ‘money, cash, hos’ of “Walk With Me,” the less we’d be likely to notice him in the sea of a million homies all more or less rhyming about the same thing.  I’m not saying that what you hear in the lyrical imagery is any less of a real experience than what you’ll hear from Steve’s inner-thoughts on the mic – but I am making an argument that when he focuses more on what’s going to keep those lyrics unique from the rest of what’s happening out there, the more I think he’ll hone in on what it is that’s really workin’ in the music of Steve Cook and what connects to us all as listeners universally.  This guy has talent that doesn’t require a badge of honor from the street, he doesn’t need to try to be cool – what’s most appealing in Cook’s music are those moments where he’s spittin’ out lyrics like he’s unfiltered and just relating the honest thoughts at the top of his dome.  Everyone always wants to be the baller when it comes to Rap/Hip-Hop…but I truly think that the majority of the appeal in Cook’s music can all be traced back to humble and unsure roots…the kind where a person is aware of their talent, but not yet fully confident on how to wield the power.  You can hear that in Steve’s relatable lyricism on “Walk With Me,” and even more-so in the others to follow – you’ll never hear it in the flow itself, which he always delivers perfectly & professionally…it’s those words of his that let you in on the mindset of the man behind the music.  The more he lets us in on what those are for real, the better the results become.

To be fair, context matters too.  “Walk With Me” attempts to venture into both worlds…the honest & real, versus the more spiced-up version with lyrics designed to become more appealing to fans of the genre.  A track like “Vacation” might go even further into the imagery and descriptions, making it more of a fantasy experience than “Walk With Me” ever tries to be.  But as a result of the extensive ways that Cook describes his daydreaming, everything really seems to fit cohesively on “Vacation.”  As to why on earth Steve is feeling like he already needs a “Vacation” from the rap-game when he’s still just getting started…well…he’ll learn soon enough that the independent music-scene, in any genre, is not a sprint – it’s a marathon, even for the best of the best.  I can dig a “Vacation” to settle the mind and reset the perspective or mood you’ve got goin’ on…but other than that, the time is always NOW to go after your music and get putting it out there.  I’ve taken about maybe one “Vacation” in the past five or six years of setting up life at sleepingbagstudios…but as they say, ‘do what you love and you’ll never work a day in your life.’  Not to get too serious while Steve’s on his “Vacation” here…but I think there’s almost no way to avoid hearing that tidbit of psychological information being offered here; it should WORRY Cook that he’s already feeling like he needs a break.  If you’re gonna make it in the music-scene, or in anything in life, you’ve gotta love the journey and the process just as much as the end results, or you’re hooped.  What causes my own worries to subside, is the completely committed & dedicated way that Cook approaches his “Vacation” on a lyrical-level.  Dude just needs to find that patience for the game, because the skill pours out from your speakers with his every word – I seriously love the way this guy raps.  This second single features Steve in multiple settings, styles and sounds in his flow as he moves from bar-to-bar with wild expressions – LISTEN to the way he attacks the verse just past the 1:15 mark!  Say what you like…but the focus you’ll hear in the way he spits his rhymes suggests the man has been harder at work than he has been relaxing on “Vacation.”  Cook’s got a seriously accessible sound in both the music and his own vocals…his pacing and metering is spot-on every time…and for what it’s worth, if you’re not psychologically examining the guy like I have been here in this review, on surface-level, I think “Vacation” is a track that a ton of people would enjoy straight-up on the rocks as it is.  Y’all know me though…I always give artists/bands the benefit of the doubt…that the things they say are one thing and the things they don’t say between the lines can often speak just as loudly…but that ultimately, they do what they do in effort to be HEARD.  Except mumble-rap…who knows what the hell they’re sayin.’

Based on everything I’ve already said, Steve already knows how this review ends up when I get to the final track of the three, “Pringles,” – he’d have to have drawn to the correct conclusion that this, for me, was without a doubt the highlight of the entire set.  I’m not even remotely kidding when I say that the opening verse on this last single from Cook’s new record M.I.D. Twenties is amongst the very best you’ll ever hear.  To give the man the credit he’s due, he never lets up from there either…he hustles and grinds his rhymes with stunning perfection on “Pringles,” proving beyond a shadow of a doubt that Cook is a top-shelf wordsmith throughout the entire song.  I really can’t say enough about how impressive this last track was though…or how amazing the way that first verse comes out.  THAT…dear readers, dear friends…is how you make a verifiable impact on us listeners.  Cook comes out swinging on “Pringles” with precision and passion, much more than the lyrical-content would lead you to believe this track even deserves.  He questions himself and the Rap-game altogether throughout the journey through “Pringles” and gets SO REAL with us that it’s like we’re sitting on the inside of his head looking out like Being Steve Cook is the new Being John Malkovich – that’s how real this is.  It’s an unbelievable look at the music-industry, how it does/doesn’t work, and of course, how that’s all applicable to Cook’s own personal pursuit and how it relates to an artist trying to find their way out of the grind and into the limelight.

“I been workin’ hard but nobody knows.”  Again…many of you out there can relate to what Cook’s saying on “Pringles” – and as far as that is all concerned…maybe that was true for him…yesterday.

I’ll tell you this much…I am HEARING Steve Cook…I now KNOW he’s out there…I’ve LISTENED to his ability, talent and passion…and he’s certainly landed firmly on my radar as a result.  I might just be one person…sometimes that’s enough…sometimes that’s what leads to two, three, and a whole mob of people starting to notice as they come around and latch onto Cook’s music.  Brick by brick homie – build that empire and stack that paper-up as it comes…even if you gotta cash-in the coins at first…it’s the process, it’s the journey…these are the things that matter just as much…and he’s gotta reach down deep and find that love for those parts of music as well.  The less he focuses on sprinting to the finish line and enjoys the marathon he can have with all the creative-control, freedom and ability to express himself as an artist without all the management BS getting in the way right now…the more he’s gonna learn he’s loving every moment.  Because I’ll tell you this as well…he might have his complaints and observations on a track like “Pringles” that are valid…but you only get this kind of perspective in the first place due to not taking that time to fully enjoy the ride.  I wish real talent like Steve’s reached the pinnacles of success overnight, just as much as he does as well I’m sure…but part of me knows that what makes a real artist is that ability to battle through the struggle and come out smiling on the other side of it.  I think you can hear that he KNOWS this in his lyrics and rhymes…I don’t think he’d even complain at all if he didn’t genuinely CARE about the results…and he ain’t whinin’ for the record, he’s just being real about his situation.  Steve Cook has all the right talent & skills to succeed and thrive in the Rap/Hip-Hop world & change the game for himself while decisively shaping the course of his own future…and the more he starts to realize he’s gotta enjoy that ride to the top of the charts, the quicker he’ll get there.